HAARP WEATHER CONTROL could be part of NWO DEPOPULATION PLAN, here's the science. 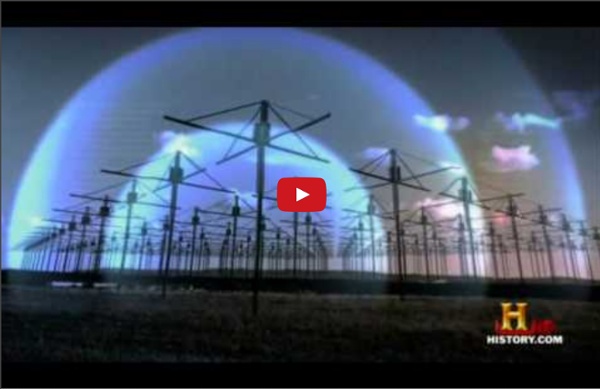 Egyptian Princess Mummy Had Oldest Known Heart Disease An ancient Egyptian princess might have been able to postpone her mummification if she had cut the calories and exercised more, medical experts say. Known as Ahmose Meryet Amon, the princess lived some 3,500 years ago and died in her 40s. She was entombed at the Deir el-Bahri royal mortuary temple on the west bank of the Nile, opposite to the city of Luxor. (Take an ancient-Egypt quiz.) The princess's mummified body is among those now housed at the Egyptian Museum in Cairo. Recent scans of 52 of the museum's mummies revealed almost half of the dead have clogged arteries—including the princess. (Related: "King Tut Mysteries Solved: Was Disabled, Malarial, and Inbred.") Ahmose Meryet Amon—"Child of the Moon, Beloved of Amun"—had blockages in five major arteries, including those that supply blood to the brain and heart, said study co-leader Gregory Thomas, a professor of cardiology at the University of California, Irvine. "She would require a double bypass."

The era of closed science is over. Moved By Light Welcome to Quantumville. Population: uncertain. Walk down Main Street, lined with blurry cars simultaneously moving and remaining still. See the house with the curtains drawn? Janel Kiley DAMPING THE WOBBLE | For decades, scientists have used light to quell the vibrations of individual atoms. Scientists create laser-producing living cell Scientists have managed to create the world’s first living laser, using nothing more than some jellyfish proteins and some embryonic human kidneys. The team behind the research – Malte Gather and Seok-Hyun Yun, of the Harvard Medical School and Massachusetts General Hospital respectively – managed to get a single living cell to emit green laser light, according to a paper in Nature Photonics . They used a genetic code for a mutant version of a protein found in glowing jellyfish, known as GFP, to create the light. They then inserted the genes necessary for producing the Enhanced GFP (eGFP) into cells grown from embryonic human kidney cells. The glowing part-human part-jellyfish part-glowstick kidney cells were then placed between two mirrors only 20 micrometers across, then bathed it in pulses of blue light of steadily increasing intensity.

Seafloor Samples Show Troubling Effects Of Oil Spill « Beyond the Walls in Biology “Modern technology, owes ecology an apology.” On December 9, 2010 scientists were trying to observe the oil from the BP blowout so they dived in a mini-submarine into the sea’s floor. Half a mile of inky black water was soft and delegate, but once the subs lights illuminated, the bottom of the scene was filled with fish and shrimps around the seafloor, as well as crabs. As they reached the seafloor, they saw a brown haze covering the seafloor, that signified fan coral that was dead. As they searched around they passed a feature called , “Sleeping Dragon,” ( like large pieces of ice). This is known as a home for creatures that are adapted to living near natural petroleum ( seeps. website : Like this: Like Loading...

Last Space Shuttle Astronauts Finish Packing Up - FoxNews.com July 17: In this image provided by NASA the Expedition 28 crew and the STS-135 Atlantis astronauts take a break from a busy day in space to pose for a portrait aboard the orbiting complex's Kibo laboratory of the Japan Aerospace Exploration Agency. Left to right in the front row are Mike Fossum, Chris Ferguson, Andrey Borisenko and Ron Garan; in the middle row are Sandy Magnus and Alexander Samokutyaev; and the back row consists of Doug Hurley, Rex Walheim, Sergi Volkov and JAXA astronaut Satoshi Furukawa.AP/NASA CAPE CANAVERAL, Florida – The astronauts making NASA's last shuttle flight gave up their off-duty time Sunday and finished packing up their gigantic suitcase for the ride home. The 10 space travelers cheered as they put the final items in Raffaello, the Italian-made cargo canister that's the size of a bus. More than 5,600 pounds of old space station equipment, packing foam and other trash will return to Earth this week inside Raffaello.

Mushroom cloud Mushroom cloud created by smoke bellows Ascending cloud from Redoubt Volcano from an eruption on April 21, 1990. The mushroom-shaped plume rose from avalanches of hot debris (pyroclastic flows) that cascaded down the north flank of the volcano. A mushroom cloud is a distinctive pyrocumulus mushroom-shaped cloud of condensed water vapor or debris resulting from a very large explosion. They are most commonly associated with nuclear explosions, but any sufficiently large blast will produce the same sort of effect. Mushroom clouds form as a result of the sudden formation of a large mass of hot, low-density gases near the ground creating a Rayleigh–Taylor instability. Origin of the term[edit] Although the term itself appears to have been coined at the start of the 1950s, mushroom clouds generated by explosions were being described before the atomic era. The atomic bomb cloud over Nagasaki, Japan was described in The Times of London of 13 August 1945 as a "huge mushroom of smoke and dust."