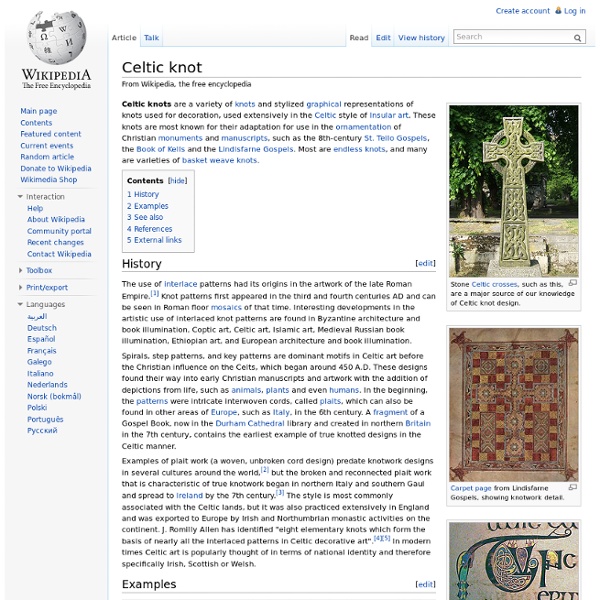 Stone Celtic crosses, such as this, are a major source of our knowledge of Celtic knot design. Carpet page from Lindisfarne Gospels, showing knotwork detail. Almost all of the folios of the Book of Kells contain small illuminations like this decorated initial. History[edit] Examples of plait work (a woven, unbroken cord design) predate knotwork designs in several cultures around the world,[2] but the broken and reconnected plait work that is characteristic of true knotwork began in northern Italy and southern Gaul and spread to Ireland by the 7th century.[3] The style is most commonly associated with the Celtic lands, but it was also practiced extensively in England and was exported to Europe by Irish and Northumbrian monastic activities on the continent. Examples[edit] See also[edit] References[edit] External links[edit]

Making Celtic Knots Here are some examples of Celtic knots and how to draw them yourself. I have written a Kindle book: How to design Celtic Knots - a guide for beginners - Buy UK - USA (or look up Jo Edkins in Amazon) Celtic knots are patterns representing ropes or threads tied in a knot. They are really mis-named. They appear in Roman mosaics, and were made by Vikings and Saxons as well as Celts.Many knots are continuous, with no loose ends, and these are also called Gordian knots or Gordic knots. This refers to the myth of the knot of Gordias. Outside links "Program to assist the creation, design and editing of 'celtic' style braids" - free OpenSource softwareSoftware for creating Celtic knots as a fontCeltic knot typeface - free to download, image, and Celtic knot generator.Hypknotix - Celtic knots website, software, artwork and resources My links You may also be interested in my website on mazes or mosaics or Greek keys or any of my other websites. © Jo Edkins 2003

Celtic knotwork, the ultimate tutorial vasarely Interlace (art) Intricate braided and interlaced patterns, called plaits in British usage, are found in late Roman art in many parts of Europe, in mosaic floors and other media. Coptic manuscripts and textiles of 5th- and 6th-century Christian Egypt are decorated with broad-strand ribbon interlace ornament bearing a "striking resemblance" to the earliest types of knotwork found in the Insular art manuscripts of the British Isles.[1] This new style featured elongated beasts intertwined into symmetrical shapes, and can be dated to the mid-7th century based on the accepted dating of examples in the Sutton Hoo treasure.[1] The most elaborate interlaced zoomorphics occur in Viking Age art of the Urnes style (arising before 1050), where tendrils of foliate designs intertwine with the stylized animals.[4] Illustrated article by Peter Hubert on the origins of interlace sculpture.

Timeless Myths Celtic art The reverse side of a British bronze mirror, 50 BC - 50 AD, showing the spiral and trumpet decorative theme of the late "Insular" La Tène style Celtic art is the art associated with the peoples known as Celts; those who spoke the Celtic languages in Europe from pre-history through to the modern period, as well as the art of ancient peoples whose language is uncertain, but have cultural and stylistic similarities with speakers of Celtic languages. Celtic art is a difficult term to define, covering a huge expanse of time, geography and cultures. Both styles absorbed considerable influences from non-Celtic sources, but retained a preference for geometrical decoration over figurative subjects, which are often extremely stylised when they do appear; narrative scenes only appear under outside influence.[4] Energetic circular forms, triskeles and spirals are characteristic. Background[edit] Carved stone ball from Towie in Aberdeenshire, dated from 3200–2500 BC[7] Pre-Celtic periods[edit]

Celtic mythology Overview[edit] Though the Celtic world at its apex covered much of western and central Europe, it was not politically unified nor was there any substantial central source of cultural influence or homogeneity; as a result, there was a great deal of variation in local practices of Celtic religion (although certain motifs, for example the god Lugh, appear to have diffused throughout the Celtic world). Inscriptions of more than three hundred deities, often equated with their Roman counterparts, have survived, but of these most appear to have been genii locorum, local or tribal gods, and few were widely worshipped. However, from what has survived of Celtic mythology, it is possible to discern commonalities which hint at a more unified pantheon than is often given credit. Celtic mythology is found in a number of distinct, if related, subgroups, largely corresponding to the branches of the Celtic languages: Historical sources[edit] Irish mythology[edit] Cuchulainn carries Ferdiad across the river