Eight ways of projecting the world 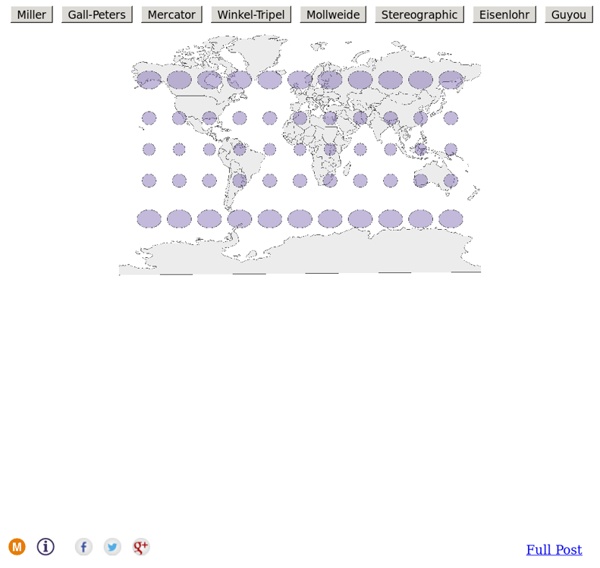 The problem with maps. Mandatory Accompanying Playlist The World The world is round. Google says so. Block by Block, Brooklyn’s Past and Present On my weekly walk to get groceries, I pass a row of brownstones — some well-kempt and majestic, some fossil-like and crumbling — bookended by a gleaming, square-windowed silver tower. It’s an architectural contrast of a kind that’s commonplace throughout Brooklyn. The borough’s a patchwork of the old and new, but traces of its history aren’t spread evenly. There are 320,000-odd buildings in Brooklyn, and I’ve plotted and shaded each of them according to its year of construction. The result is a snapshot of Brooklyn’s evolution, revealing how development has rippled across certain neighborhoods while leaving some pockets unchanged for decades, even centuries. Take a look

Manhattan Skyscraper Explorer Loading... Manhattan Skyscraper Explorer ArcGIS API for JavaScript Disclaimer The Agas Map Our new (as of the beginning of 2015) implementation of the Agas Map is based on the OpenLayers 3.0 library. It presents the map as a zoomable, rotatable tiled image with several hundred locations plotted on it. In the default view, the locations are initially hidden; you can show them by checking checkboxes in the navigation panel which appears at the top right of the map. Locations in the navigation panel are sorted into categories; click on a category name to expand it and see all the locations. Some locations appear in more than one category. Medieval and Tudor Ships of England Origins and destinations of voyages in the database. The voyages shown here largely cover the period c.1565-c.1580. There are a few documents that record voyage details for the period before 1565 (a few Bristol accounts, a few ships leaving Hull for Calais loaded with wool, and a few east coast coastal records), but most pre-1565 documents only reveal if a ship entered or left a particular port, not where it came from or where it was going to. The Bordeaux wine trade voyages are equally difficult to map. While we know the ships left Bordeaux we can never be sure of where they sailed from to get to Bordeaux or where they sailed to after leaving Bordeaux. A Southampton ship, for example, may have left Bordeaux with wine but sailed straight to London.

Mapping the Flow of International Trade According the UN’s Comtrade database, the global market for imported goods totaled $15.6 trillion in 2015. This map shows where those goods came from and where they went, each dot representing $1 billion in value. Select a country to see the flow of goods in and out of that country. The Flow of International Trade (full screen) Education Available languages — Using OpenStreetMap in an Educational Context For information about academic research related to OpenStreetMap, see Research.

Medieval Fantasy City Generator by watabou This application generates a random medieval city layout of a requested size. The generation method is rather arbitrary, the goal is to produce a nice looking map, not an accurate model of a city. All the actions and options are accessible via the context menu. Hot keys: