CoSpaces: Make your own VR experience 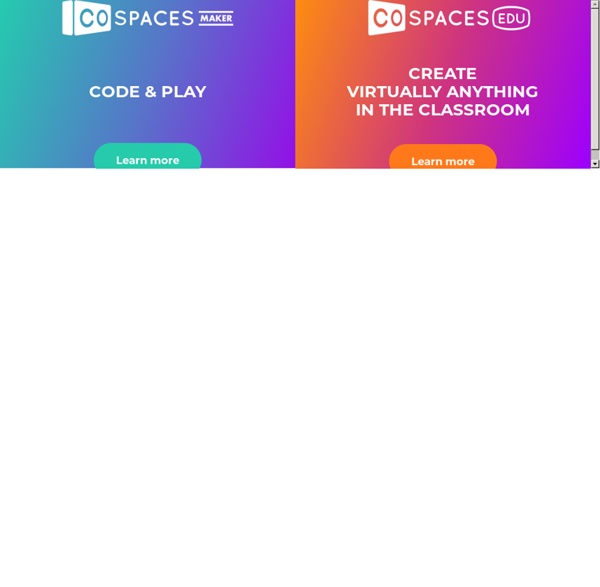 Floors — Pixel Press Bring your video game ideas to life, simply by drawing! Pixel Press Floors is changing the way we experience mobile games by letting anyone be the creator, publisher and player of their own video game. With our creator platform, you can literally draw your own video game – no coding required. By recognizing the shapes (“glyphs”) you draw on paper or in the app using our “Draw-in-App” tools, we instantly turn your level blueprint into a game that can be tested, designed, played – and most importantly, published to the “Arcade” where others can enjoy your level and you can track how many times it’s played. Is this a good fit for parents & teachers?

Will Virtual Reality Drive Deeper Learning? Though no hard numbers are available yet on how many K–12 classrooms are using virtual or augmented reality, new estimates suggest the technology could reach 15 million students by 2025. But without research to show the impact, experiences like landing on the moon or the sinking of the Titanic could be closer to entertainment than education, argue critics, who say much of what’s being marketed as virtual reality is not groundbreaking—or even new. Computer scientists first began experimenting with “virtual experiences” in the 1950s, and by the 1980s goggles and gloves had been developed to simulate immersion in a virtual world. “My question is always: How is virtual reality different from educational film?”

15 Games To Teach Kids About Social Issues - EasyBib Blog Incorporating games into the classroom is a great way to engage students and increase motivation. But how can social studies and history teachers use games to help students better understand social issues? Our guest contributor and expert on game-based learning, Dr. Matthew Farber, shares his favorite tools: Social impact games are a genre that seek to effect positive changes in society through play. 5 ways to boost VR-content creation When it comes to virtual reality (VR) in the classroom, consuming the content is only half of the learning magic, said Michael Fricano and Gabriel Yanagihara, teachers at Iolani School in Hawaii. Fricano and Yanagihara spoke to educators about developing students to be content creators during their presentation, “Changing the (Virtual) Reality of Education,” at ISTE 2017 in San Antonio. “[Virtual reality] experiences provide a high level of engagement when consumed, but creating VR offers an entirely different experience,” Fricano said in an email interview. When students create virtual content, they exercise creativity and hone critical skills, including research, planning, team collaboration, and video production and editing, among others, Fricano said. “It’s not just about the VR,” he said, “but what can be included inside the VR experience.” Taking your students from consumers to creators does not have to be a monumental feat -- or cost.

30 Immersive Storytelling platforms, apps, resources & tools The following list was compiled by an amazing group of storytellers from around the world. Last semester, while I was teaching Building Storyworlds: the art, craft & biz of storytelling in 21c at Columbia University, I reached out via a facebook post for immersive storytelling platform, app, resource and tool recommendations. Each semester my students design, prototype and present an immersive adaption of Sherlock Holmes. I shared some of the following list with the class in an effort to provide a sandbox for their experimentation. Since the semester ended, I’ve discovered a few additional resources that I’ve included below. Big thanks to everyone who contributed (see list at the end of the post). Students Create VR Field Trips in Charlottesville, VA Setting up a shoot at the Jefferson School.Photos courtesy of IdaMae Craddock My sister gave me a Google Daydream for Christmas and suggested that my students would love using it to explore VR in the library. They do. While VR can transport students to a place where they can see things from a new perspective, it also has the powerful capacity to let them look at themselves in a new way.

DiscoVR Beyond Expeditions: Virtual Reality Creation in Libraries In her fantastic session at AASL 2017 in Phoenix, Arizona, Katie McNamara laid out how to utilize virtual reality as a tool for creation with our students. She shared tools and ideas and led participants through creating their own 360-degree images (with their phones!) that they could then manipulate. Katie generously shared her slides with links and images to projects her students have created. First off, why VR? Katie explained that VR can create shared experiences for our students. Virtually There: Kids are using VR to explore worlds and create new ones Illustrations by Joe Magee Students who don’t struggle in social situations might never understand what it’s like for those who do. Junior and senior photography students at Parkville High School (PHS) in Baltimore, however, are using a new medium to give others a glimpse into emotions that accompany social anxiety. Using a Ricoh Theta-S 360 camera, the students created a short virtual reality (VR) movie about social anxiety called “Breaking Barriers”.

The Educational Potential of Augmented Reality I’m not sure about you, but watching my neighborhood—OK, the entire world—become obsessed with the augmented reality (AR) game Pokémon Go, I knew I had better do some serious research into AR’s implications and applications. Virtual vs. augmented Sportvision Unlike virtual reality, which offers the user a 360-degree view of an artificial world, augmented reality superimposes an image, video or some other digital overlay onto our view of the real world in real time. For example, AR has long been used in Sportvision to project the first down marker in football. It’s not actually on the field, but it is on viewers’ screens.

On the Bright Side: Science teacher's sandbox sheds light on topography Cory Raner's eighth-grade earth science class in Oneonta Middle School on Thursday was filled with the hum of excited students using an augmented reality sandbox. With the room lights on and the machine off, the sandbox looked like a large overhead projector with a box of sand where the glass plate should be. Raner then flipped the light switch and powered up the machine. Instantly, the sandbox became a three-dimensional topographical map, the curvature of the sand displaying mountains, rivers and valleys in bright reds and yellows, low points became deeper blues.