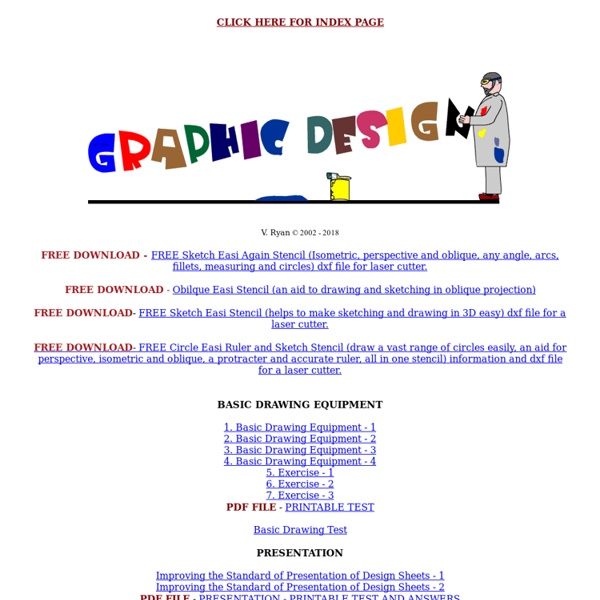 DIY Instructions for Beginners As a beginner to pop-ups, the V-fold and box fold techniques are likely to be the ones you will be using most. Here is a list of the most common mechanisms used in pop-up creation: - V-Folds: These can be cut and folded directly into the main piece of card, or can be created by adding an additional section of card for the pop-up shape.

Origamic Architecture Kirigami Cards for Free ! At the beginning Origamic Architecture is a paper folding and cutting art created in the early 80's by Masahiro Chatani (a Japanese architect). It consists of a simple sheet of paper that the artist cuts and folds to create a pop-up shape as the card is opened. The OA cards frequently represent famous buildings or geometrical figures but there are many other possibilities. Drawing Guide/ BS8888 details Projections First angle and third angle projection methods are acceptable. The symbol identifying the type of projection used should be placed in a space provided in the drawing block

Pop Up Card Tutorial Lesson 2 Level of Difficulty: Medium Box Variation In Lesson 1 we cut rectangular boxes on the card fold. The pop out piece created by this cut has two identical faces. wundes.com To download this script: right-click and select "Save Link As" When Adobe came out with the new CS text engine, the text fields in documents saved in an older format were often broken into "sub" fields. This script is a rudimentary tool to help rejoin the broken text fields. It works best on individual lines of horizontal text. It collects text from any number of selected (non-grouped) textframes and aggrigates them into a single text frame. the order is based on relative x,y coordinates.

Creativity on the Run: 18 Apps that Support the Creative Process "The intuitive mind is a sacred gift, the rational mind is a faithful servant. We have created a society that honors the servant and has forgotten the gift." - Albert Einstein We do not need to teach creativity, but rather inspire its daily practice. Somewhere along the way, we simply forgot to honor this innate gift and how to access its power. Engineering Drawing and Sketching by Ernesto E. Blanco, David Gordon Wilson, Sherondalyn Johnson, and LaTaunynia Flemings Engineering Drawing Index Introduction One of the best ways to communicate one's ideas is through some form of picture or drawing. Seven Flower Pop Up Card I know I say "amazing" a lot, but this really is the Amazing Seven Flower Pop Up! It's not hard to make. Really, truly. But it takes some time. Impressive results!

wind-up paper butterflies are my fave (guest post from amelia) I had a baby so I’ve invited some fave guests to take over for me while I spend time with the little guy. Today’s post is from super crafter and cute mom, Amelia of The Homebook. Growing up, I had an aunt who lived in Canada. Every year for my birthday she’d send me a card and a fancy little gift. She always found the neatest things! One year, when I was maybe 10 or 11, she sent me another card—and when I opened it up, a paper butterfly fluttered out of the card.