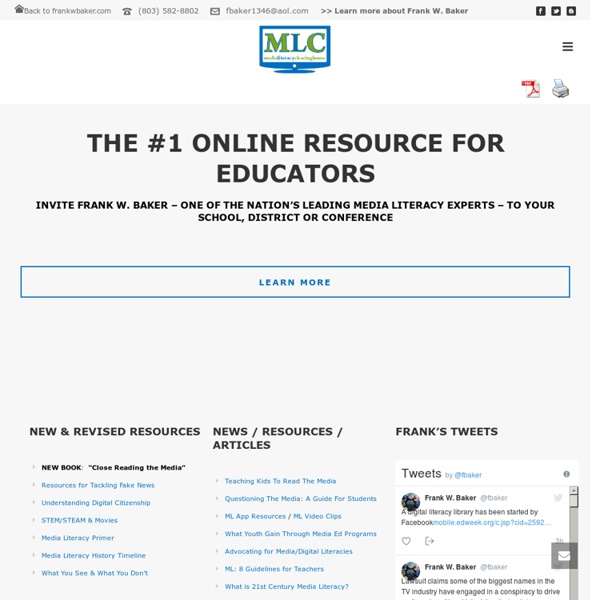 School Librarians Are Teaching Digital Citizenship April Wathen photo: Jill Springer April Wathen, Kathy Lester, and Steven Yates. As technology and social media play an increasingly big role in the classroom, educators are faced with challenges of teaching students how to use technologies in appropriate ways, and how to be safe and responsible online—the basic tenets of what is known as digital citizenship, a close relative of digital literacy. Fortunately, classroom teachers often have an expert ally to assist them in getting the job done: their school librarian or media specialist.

Special Report: The Changing Face of Literacy There has never been a generation of young people more immersed in digital media than this one, many of whom learned to use a mobile device before they even started school. This special report examines how literacy instruction is changing in the digital age, from learning to sound out words in elementary school to grappling with “Macbeth” in high school. It finds that, while experts quibble over what it means to be digitally literate, they agree on one thing: even the youngest children should be learning literacy with a mix of print and digital texts. Is the digital revolution transforming literacy instruction in the nation’s schools?

Beers & Probst: Responsible Reading and Fake News By Kylene Beers & Robert Probst How do we teach kids across the grades to read responsibly? Close attention to an author’s words – the responsibility a reader shows to the text – implies and requires a responsibility to oneself as well as the words on the page. Reading Across a Dozen Literacies This article will define each literacy while giving examples of "reading" within each category. It takes special skills to read a swamp or a beach or a desert area. These skills also differ from region to region as the flora and fauna shift. Most of us have heard of swimmers caught in rip tides because they did not know how to read the signs or of visitors enjoying tidal flats suddenly swept up in an incoming tide much larger than anything they knew back home.

Critical readers in the (mis)information age Did you know that Chicago was the most dangerous city in the US in 2014? I didn’t. I would have thought it was some bigger city, but according to this set of FBI statistics of total murders, I was wrong. But actually, was I? Bias already exists in search engine results, and it’s only going to get worse The internet might seem like a level playing field, but it isn’t. Safiya Umoja Noble came face to face with that fact one day when she used Google’s search engine to look for subjects her nieces might find interesting. She entered the term “black girls” and came back with pages dominated by pornography. Noble, a USC Annenberg communications professor, was horrified but not surprised.

Fake News: Recommendations - Media Literacy Clearinghouse If you read any news story about “fake news” in the past 18 months, you no doubt came across the phrase “media literacy.” From the various news stories and blog posts, I have compiled the following recommendations and advice. (NOTE: lesson plans, handouts and related videos are posted near the bottom of this list) Newest materials are posted last. Do you have suggestions for content that could be added here?

Media Literacy Skip to contentSkip to navigation National Council for the Social Studies Search form Howard Rheingold: Check Facts With Crap Detection Resources - DML Central Want to know if someone plagiarizes a speech? Is the content on a website copied from another website? Do those song lyrics sound familiar? What about those statements? Have they been stolen from books, articles or other public documents? The End of Reality In a dank corner of the internet, it is possible to find actresses from Game of Thrones or Harry Potter engaged in all manner of sex acts. Or at least to the world the carnal figures look like those actresses, and the faces in the videos are indeed their own. Everything south of the neck, however, belongs to different women.

To Test Your Fake News Judgment, Play This Game : NPR Ed Fake news has been on Maggie Farley's mind further back than 2016 when President Trump brought the term into the vernacular. Farley, a veteran journalist, says we've had fake news forever and that "people have always been trying to manipulate information for their own ends," but she calls what we're seeing now "Fake news with a capital F." In other words, extreme in its ambition for financial gain or political power. "Before, the biggest concern was, 'Are people being confused by opinion; are people being tricked by spin?' More Thoughts on 21st Century Literacies Extended interviews with educators on the meaning of "21st century literacies," recommendations for using new technologies, and ideas for updating lesson plans to support 21st century learning. How do you define 21st century literacies, and how are they different from 20th century literacies? "One of the problems when talking about 21st century skills or 21st century literacy skills is that this is a nice buzzword, but nobody really defines it very well," says Karl Fisch. As for what's different: "When I was growing up in the 1970s and 1980s, our conception of what literacy was very, very different. For the most part, it was being able to read at a certain level, and certainly there was some writing in there, but so much of the focus at that point was on reading to acquire information."

MediaLit Moments Friday, 19 May 2017 11:06 Beth Thornton In the “olden days,” people primarily relied upon newspapers for their news, and the papers were clearly labeled by section -- “News” “Features” “Opinion.” Through everyday use, newspapers trained their readers to expect the international and national news on the front page, and state and local news in following pages, and to flip through the pages for articles about local heroes or topics of interest like Home and Garden, Sports, or their favorite columnists and Editorials.

Determining the real from the fake health news - Philly The American Dialect Society voted “fake news” its Word of the Year for 2017, saluting the phrase for its double meanings as “disinformation or falsehoods presented as real news” and “actual news that is claimed to be untrue.” Fake news of either kind is a problem in politics, to be sure. But misleading or erroneous medical news is potentially even worse.