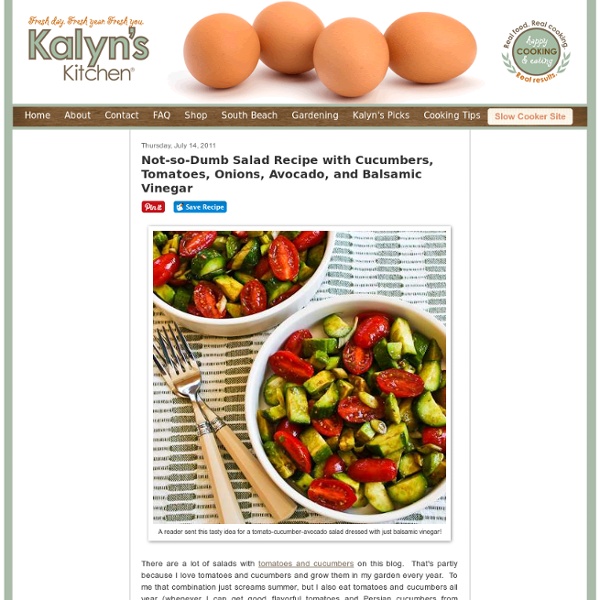 There are a lot of salads with tomatoes and cucumbers on this blog. That's partly because I love tomatoes and cucumbers and grow them in my garden every year. To me that combination just screams summer, but I also eat tomatoes and cucumbers all year (whenever I can get good flavorful tomatoes and Persian cucumbers from Costco.) So when a reader from Hawaii named Lisa sent me her recipe for "dumb salad" and said it was something she made often, I was interested. Lisa discovered this combination when she was going out of town and needed to use what was on hand, and I promise you, this salad idea that combines cucumbers, tomatoes, onion, avocado, and balsamic vinegar is not dumb at all! Of course, only make this when you have fresh flavorful tomatoes, but I loved the combination of flavors, accented with just a little good sea salt and some coarse ground black pepper. I used my first garden cucumber (on the right) which I combined with two Persian cucumbers. Instructions:

Beef & Beer Stew with Cheese Dumplings aka The Marriage Maker ![Beef & Beer Stew with Cheese Dumplings ( It doesn't take much to figure out men. Vegan Miso Soup Recipe - Made Just Right Photo courtesy of Adactio[/caption] It used to be that chicken soup was the prescribed go-to meal for anyone feeling under the weather. There are however healthier plant-based options that not only help ease one through the transition from illness back to health, but also contribute to an overall sense of well-being.

Crispy Baked Spicy Pumpkin Wontons Sadly, I haven’t always been kind to pumpkins. Quickly dismissed as something to be decorated and displayed, while other squashes make the cut and are happily cooked and eaten. That all changed last year when I tried pumpkin curry for the first time at a Thai restaurant. I had an epiphany; pumpkin is yummy in a savory dish. No longer shunned, I grabbed a couple cans from Trader Joe’s mountain of canned organic pumpkin puree before they’re all gone (15 oz can for $1.99). Skinny Spaghetti There is no denying that a delicious bowl of pasta is satisfying and delicious...but did you know that you can still have "pasta" without the carb overload? Spaghetti squash is a delicious and healthy alternative that is high in fiber and low in calories. Once cooked the inside of a spaghetti squash looks just like pasta and you can make it however you would normally make a pasta dish. There are several ways to cook a spaghetti squash. You can microwave it, bake it, boil it or crock pot it. I pierced it with a knife several times (if you don't pierce it you will end up with a squash explosion..yes this happened to me one time when I tried to microwave it) and boiled it whole for about an hour.

Chipotle Guacamole & Grilled Tortilla Chips. I’m such an avocado freak. It ends up in nearly everything I eat, without even trying. And when it comes to guacamole, I’m all over it. baked chicken-less taquito — the tolerant vegan - StumbleUpon As you know, I am not a huge fan of the faux cheeses. They usually gross me out. I’ve tried several vegan cheese pizzas, cheese dogs, cheese sauces, etc that people claimed were THE BEST EVER, only to find myself disappointed and sometimes disgusted. So I gave up. Hasselback Garlic Cheesy Bread Hasselback Garlic Cheesy Bread First thing: this Calphalon Giveaway ends on Friday! Enter enter enter! Second thing: this bread is the bomb. Last week, I got some evil Kerrygold Samples in the mail. Basically, it was a box filled with cheese and butter.

Super dooper veggie bowl! (Spaghetti Squash) I’m not nearly as sore as I thought I would be after my run in VFFs yesterday. The only thing that is sore is the Achilles tendon on my right leg. But even that isn’t all that bad. I’m hesitant to say I’m out of the woods because it tends to take me 24-48 hours to feel the full soreness after a workout.