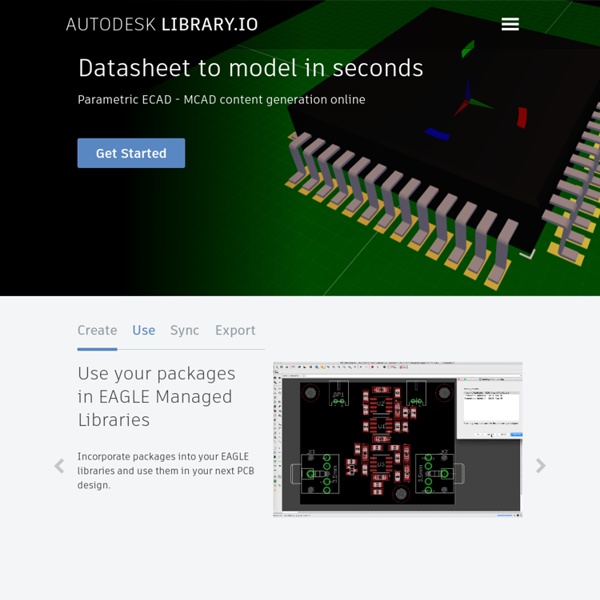 Burning a bootloader to an Arduino Nano using another Arduino Recently I have bought a cheap clone of Arduino Nano from the Chinese site Deal Extreme. Unfortunately, that product (SKU 81877) comes without a bootloader. The main sign that indicates you that the Arduino doesn’t have a bootloader is that the “L” LED, next to the Power LED, doesn’t blink when the Arduino is connected to the power source or when the Reset button is pressed. It is possible to use your Arduino without a bootloader, but it won’t work with the Arduino IDE and you will need an external AVR Programmer like this one in order to upload sketches.

Mert Arduino: Arduino Tutorial 05 - Stepper Motor Control with Motor Shield Stepper motors are great for semi-precise control, perfect for many robot and CNC projects. This motor shield supports up to 2 stepper motors. The library works identically for bi-polar and uni-polar motors For unipolar motors: to connect up the stepper, first figure out which pins connected to which coil, and which pins are the center taps. If its a 5-wire motor then there will be 1 that is the center tap for both coils. Theres plenty of tutorials online on how to reverse engineer the coils pinout. What Makers Bring To Education What does the Maker movement have to offer education? One compelling idea is what some many consider to be an upside-down way to learn. Larry Rosenstock, founder of High Tech High, started me thinking about this idea in a conversation we had on project-based learning. He pointed out that most programs teach kids in advance the skills they will need to succeed at the project, but Larry believes that the students should learn the skills as part of the project - just at the moment they need them. For example, if one were to teach skills in advance for, say, scientific data collection, a teacher might show students pictures of the equipment they will use, test them on their ability to describe the function, demonstrate how to organize their data and warn them to label their axes--a somewhat mind-numbing approach. Consider instead the opposite approach--laying out the objective of the lesson, and then helping students discover what tools will help them reach their goal.

40 websites that will make you cleverer right now The indexed web contains an incredible 14 billion pages. But only a tiny fraction help you improve your brain power. Here are 40 of the best. whizzpast.com – Learn about our awe inspiring past all in one wonderful place. khanacademy.org – Watch thousands of micro-lectures on topics ranging from history and medicine to chemistry and computer science. freerice.com – Help end world hunger by correctly answering multiple-choice quizzes on a wide variety of subjects.

CFD for Building Air Quality Sustainable building design has been adopting new design tools at an impressive pace over the last 10 years. BIM workflows and technology deployments are as unique as the number of firms I've worked with. As I promoter of CFD for building design I've witnessed firms benefit from CFD in many design stages of the BIM process: conceptual, HVAC optimization, external wind and solar studies for energy analysis to selling services and customizing proposals for client presentations. CFD is in the early stages and out of reach by many smaller companies but the adoption is happening and im excited to be a part of it. I'm often asked how CFD is used in Building Design?

Pocket AVR Programmer - PGM-09825 Works very well for the ATmega328P and I’m sure it works well with others too. Note that just as the description says, it does include an AVR programming cable. I ordered one separately because apparently I just can’t read well. Also note that it worked fine for me on Linux. I installed avrdude and used the following line:

DIY Arduino Bluetooth Programming Shield If you’ve ever wished you could program your Arduino without lugging a USB cable around, wanted to put an Arduino project somewhere out-of-reach but still be able to easily upload changes to it, thought about building a project that interfaces with an Android phone, or contemplated a way to get remote sensor data streamed to your computer — this project is for you. It uses a common, low-cost Bluetooth module mounted onto a prototyping shield for durable and reliable use. Along with the module is a circuit that allows the Arduino IDE to automatically reset the Arduino when uploading a new sketch. This project also uses the latest version of the Arduino IDE which eliminates the need to hack in modified DLL files to get the serial programming to work.

How to Build Your Makerspace Learning by making has been around since long before edtech—just think about what the adventurous explorers or intrepid settlers of yore would have thought of "Do-It-Yourself." But with thousands of kid-friendly tech tools and a whole World Wide Web of resources out there, creative, interesting opportunities for learning-by-making abound for everyone. Okay, so with all those resources, where should you start to build a makerspace? Here at EdSurge, we've rolled up our sleeves, put on our protective goggles, and built a Maker Guide from scratch, just for you. Read on for ideas from the educators and entrepreneurs who think making 24/7, including what is involved with project-based learning and making in the classroom and tried-and-true lessons from the field on starting your makerspace. Making on a budget?