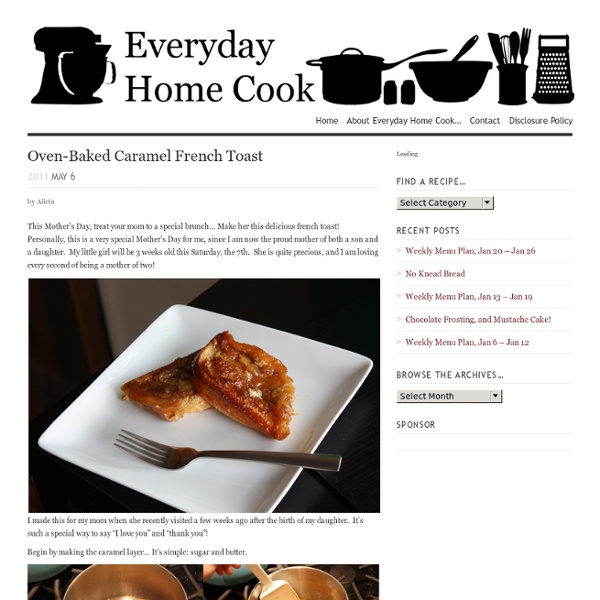 This Mother’s Day, treat your mom to a special brunch… Make her this delicious french toast! Personally, this is a very special Mother’s Day for me, since I am now the proud mother of both a son and a daughter. My little girl will be 3 weeks old this Saturday, the 7th. She is quite precious, and I am loving every second of being a mother of two! I made this for my mom when she recently visited a few weeks ago after the birth of my daughter. It’s such a special way to say “I love you” and “thank you”! Begin by making the caramel layer… It’s simple: sugar and butter. Next, slice up your french bread. Now that you know how many slices will fit, pour the caramel into the dish. The egg mixture can be combined by hand with a whisk, but it’s so simple to put everything in a blender. Chill the bread in the refrigerator overnight. Let it sit on the counter while you preheat the oven, and then bake until the bread gets to be light golden brown. Oven-Baked Caramel French Toast Caramel Sauce 6 eggs

fashion <br /><h3>This site is much cooler with JavaScript enabled. Please turn it on! <a href=" target="_blank">Here's how &rarr;</a></h3> — Below are all the messages tagged fashion — Dad: Got a haircut today! Coconut Milk Chocolate Cake I've finally moved into my amazing little flat in London. Today my mum left after helping me out and going on holiday - we've been on the move for weeks. It feels so good that I can finally settle down into my new home. Cinnamon Roll Pancakes Updated 9/22/11 to Add: If you’re coming here to sample these delicious Cinnamon Roll Pancakes, you just might like the latest recipe that I’ve posted for Pumpkin Cinnamon Roll Pancakes too. And Gingerbread- Cinnamon Roll Pancakes too. Enjoy! Here’s a short video sharing how to make these delicious pancakes: If you’ve ever thought you needed a reason to eat pancakes, today is the day: National Pancake Day!

Baked Egg Boat recipe Breakfast is my favorite meal. I like to drink iced coffee and watch the cream climb its way down the chunky ice cubes in a dazy before the caffeine hits. I like to order bacon with whatever I’m eating. I like eating potatoes with ketchup. I like eggs over easy, and fluffy scrambled eggs. Sticky Lemon Rolls with Lemon Cream Cheese Glaze They are modeled after the classic cinnamon roll, and partially inspired by this bread, with a buttery yeast dough flecked with nutmeg and lemon. But inside each roll is a rich filling of sugar and lemon that bakes into gooey, oozey sweet-tart deliciousness. The cream cheese glaze puts it over the top, with more lemon tartness and not too much sweetness.

12 must-have Dashboard widgets for the average Mac user Most Dashboard widgets are useless pieces of crap. With that said, a good widget can be both fun and useful. Our list of 12 must-have widgets covers a wide range of categories, which should appeal to pretty much everyone looking to get the most out of their Mac experience. alexandra's kitchen — seasonal recipes for everyone I swear buttermilk is magic. I’ve dwelled on this before. Buttermilk seems to turn everything to gold. Fruit “Caviar” – Adventures in Molecular Cooking [3] “Fruit Caviar” Last week I received the elBulli Texturas MiniKit that I ordered from the UK. Not only did it include the groovy Texturas ingredients, but also the tools and guidebook that I needed to really jump into this brave new world.

Make-Ahead Muffin Melts This is another recipe from my mother’s recipe collection. It’s a make-ahead concoction meant to be spread on English muffins and broiled. And it’s just…it’s just… It’s divine. And here’s what you need.