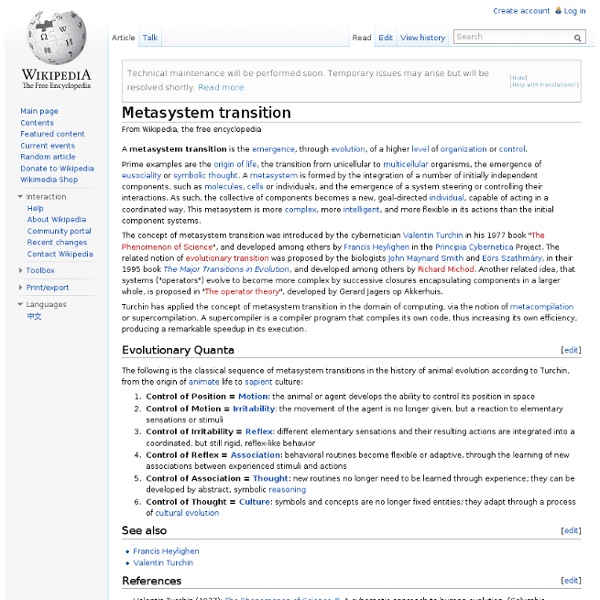 A metasystem transition is the emergence, through evolution, of a higher level of organization or control. The concept of metasystem transition was introduced by the cybernetician Valentin Turchin in his 1970 book "The Phenomenon of Science", and developed among others by Francis Heylighen in the Principia Cybernetica Project. The related notion of evolutionary transition was proposed by the biologists John Maynard Smith and Eörs Szathmáry, in their 1995 book The Major Transitions in Evolution. Another related idea, that systems ("operators") evolve to become more complex by successive closures encapsulating components in a larger whole, is proposed in "The operator theory", developed by Gerard Jagers op Akkerhuis. Turchin has applied the concept of metasystem transition in the domain of computing, via the notion of metacompilation or supercompilation. Evolutionary Quanta[edit] See also[edit] References[edit]

The Major Transitions in Evolution The Major Transitions in Evolution is a book written by John Maynard Smith and Eörs Szathmáry (Oxford University Press, 1995).[1] This was a seminal publication that continues to contribute to ongoing issues in evolutionary biology.[2][3] Maynard Smith and Szathmáry identified several properties common to the transitions: As stated by the authors,[4] this book was aimed at professional biologists and assumes considerable prior knowledge. See also[edit] References[edit] Paradigm shift A paradigm shift (or revolutionary science) is, according to Thomas Kuhn, in his influential book The Structure of Scientific Revolutions (1962), a change in the basic assumptions, or paradigms, within the ruling theory of science. It is in contrast to his idea of normal science. According to Kuhn, "A paradigm is what members of a scientific community, and they alone, share" (The Essential Tension, 1977). Unlike a normal scientist, Kuhn held, "a student in the humanities has constantly before him a number of competing and incommensurable solutions to these problems, solutions that he must ultimately examine for himself" (The Structure of Scientific Revolutions). Kuhnian paradigm shifts[edit] Kuhn used the duck-rabbit optical illusion to demonstrate the way in which a paradigm shift could cause one to see the same information in an entirely different way. Science and paradigm shift[edit] Examples of paradigm shifts[edit] Natural sciences[edit] Social sciences[edit] Marketing[edit] M.

Emergentism In philosophy, emergentism is the belief in emergence, particularly as it involves consciousness and the philosophy of mind, and as it contrasts (or not) with reductionism. A property of a system is said to be emergent if it is in some sense more than the "sum" of the properties of the system's parts. An emergent property is said to be dependent on some more basic properties (and their relationships and configuration), so that it can have no separate existence. However, a degree of independence is also asserted of emergent properties, so that they are not identical to, or reducible to, or predictable from, or deducible from their bases. The different ways in which the independence requirement can be satisfied lead to variant types of emergence. Forms of emergentism[edit] Other varieties see mind or consciousness as specifically and anomalously requiring emergentist explanation, and therefore constitute a family of positions in the philosophy of mind. Relationship to vitalism[edit] C. C.

Main Page - Metagovernment - Government of, by, and for all the people The Emergence of Collective Intelligence | Ledface Blog ~Aristotle When we observe large schools of fish swimming, we might wonder who is choreographing that complex and sophisticated dance, in which thousands of individuals move in harmony as if they knew exactly what to do to produce the collective spectacle. So, what is “Emergence”? School of fishes dancing is an example of “emergence”, a process where new properties, behaviors, or complex patterns results of relatively simple rules and interactions. One can see emergence as some magic phenomena or just as a surprising result caused by the current inability of our reductionist mind to understand complex patterns. Humans can do it too We humans have even built artificial environments that allow for collective intelligence to express itself. Each and every actor in the financial markets has no significant control over or awareness of its inputs. Can we transpose it to other domains? Nobody can single-handedly create “collective intelligence”. Too remote of a possibility?

Noocracy Noocracy (/noʊˈɒkrəsi/ or /ˈnoʊ.əkrəsi/), or "aristocracy of the wise", as defined by Plato, is a social and political system that is "based on the priority of human mind", according to Vladimir Vernadsky.[citation needed] It was also further developed in the writings of Pierre Teilhard de Chardin.[citation needed] Etymology[edit] Development[edit] One of the first attempts to implement such a political system was perhaps Pythagoras' "city of the wise" that he planned to build in Italy together with his followers, the order of "mathematikoi." As defined by Plato, Noocracy is considered to be the future political system for the entire human race, replacing Democracy ("the authority of the crowd") and other forms of government. Publications[edit] In the European Commission Community Research publication, Art & Scientific Research are Free: Towards a Culture of Life, it states several commentaries by Hans Jonas and especially Ladislav Kovác about Noocracy.[1] See also[edit] References[edit]

Open-source governance Open-source governance is a political philosophy which advocates the application of the philosophies of the open source and open content movements to democratic principles in order to enable any interested citizen to add to the creation of policy, as with a wiki document. Legislation is democratically opened to the general citizenry, employing their collective wisdom to benefit the decision-making process and improve democracy.[1] Theories on how to constrain, limit or enable this participation vary however as much as any other political philosophy or ideology. Accordingly there is no one dominant theory of how to go about authoring legislation with this approach. There are a wide array of projects and movements which are working on building open-source governance systems.[2] Applications of the principles[edit] In practice, several applications have evolved and been used by actual democratic institutions in the developed world:[3] Common and simultaneous policy[edit] History[edit]

Institute for Ethics and Emerging Technologies Sociocracy Sociocracy is a system of governance, using consent-based decision making among equivalent individuals and an organizational structure based on cybernetic principles.[1] The most recent implementation of sociocracy by Gerard Endenburg,[2] also known as Circular Organizing, was developed as a new tool for governance of private enterprise, but has been adopted in many different kinds of organizations including public, private, non-profit and community organizations as well as professional associations. Origins[edit] The word sociocracy is derived from the Latin and Greek words socius (companion) and kratein (to govern). It is English for the word sociocratie, coined in 1851 by Auguste Comte, a French positivist philosopher (who also derived the word sociology from social physics) and later used by the U.S. sociologist Lester Frank Ward in a paper he wrote for the Penn Monthly in 1881 and later still by Dutchman Kees Boeke, who applied the concept to education. Essential principles[edit]