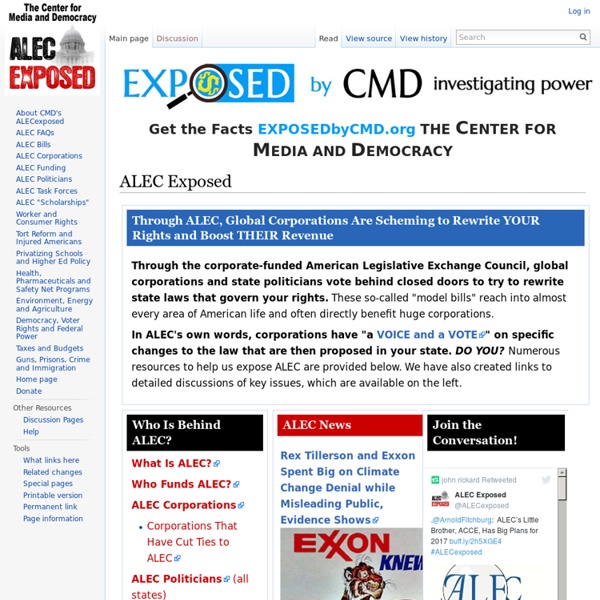 Progressive Policies Win at the Ballot Box Ballot measures across the country passed on November 8th highlighting the fact that progressive values still resonate with the U.S. electorate. Gains were made even in the face of industry deception and big dollar ad campaigns. In a victory for climate activists and solar energy, Floridians voted down Amendment 1, a constitutional amendment which would have made it hard for people with solar panels to sell energy back to the grid. Read the rest of this item here. Kochs Battle Dark Money Disclosure in South Dakota The Koch network mobilized in South Dakota to defeat the "South Dakota Accountability and Anti-Corruption Act," a state-wide initiative on the ballot November 8. The anti-corruption measure, Initiated Measure 22 or IM-22, was launched by a bipartisan group called the South Dakotans for Integrity and put on the ballot with signatures from over 20,000 state residents. Related:  corruption | government • Koch Brothers Manipulating Policy for Profit

Judge Asks for More Information About NSA Spying Evidence Destruction After Emergency Hearing San Francisco - A federal judge asked for more briefing today after an emergency court hearing over destruction in a case challenging NSA spying from the Electronic Frontier Foundation (EFF). Andrew Crocker, Rick Wiebe, and Cindy Cohn "We are pleased the court is receptive to our arguments – that this is the information that court ordered the government to retain, and is an important element of our litigation," said EFF Legal Director Cindy Cohn. "It's unfortunate that the court's order today allows the government to continue destroying evidence that the government itself insists we need, but we are looking forward to giving the judge all the information he needs to come to a final decision." U.S. EFF has been litigating against illegal NSA surveillance for more than eight years. For more on Jewel v. Contact: Rebecca Jeschke Media Relations Director Electronic Frontier Foundation press@eff.org

United States of ALEC BILL MOYERS: Welcome, to a story that's been unfolding for more than 30 years but has gone largely untold. That's the way the central characters wanted it. They were smart and understood something very important: that they might more easily get what they wanted from state capitals than from Washington, DC. Politicians and lobbyists at the core of this clever enterprise figured out how to pull it off in an organized, camouflaged way -- covering their tracks while they put one over on an unsuspecting public. ARIZONA DEM. JOHN NICHOLS: If you really want to influence the politics of this country you don’t just give money to presidential campaigns, you don’t just give money to congressional campaign committees. FORMER PRESIDENT RONALD REAGAN: ALEC has forged a unique partnership between state legislators and leaders from the corporate and business community. HOUSE SPEAKER JOHN BOEHNER: ALEC, has been I think a wonderful organization. BILL MOYERS: But ALEC is partisan. WISCONSIN DEM.

Science and Public Policy The “War on Terror” is a Criminal Fraud TEHRAN (FNA)- Canadian scholar Prof. Michael Keefer believes that the US-engineered project of War on Terror is a “criminal fraud” that has virtually extinguished the American democracy and the civil liberties of the American people. “The so-called War on Terror is a criminal fraud, designed to frighten Americans and the citizens of its allies into supporting systematic violations of international law. On the US special relationship with Israel and Washington’s unconditional support for the Tel Aviv regime, Prof. “The powerful and well-funded Israel lobby supports these policies—though there is evidence of a growing alienation among young Jews both from this lobby and from the state of Israel,” he added. Michael Keefer is a professor emeritus at the University of Guelph’s School of English and Theater Studies. He has published widely on English Renaissance literature and early modern philosophy, and has also written widely on issues of contemporary politics and cultural politics.

'Dark Cloud' of ALEC Converges at Annual Corporate-Political Lovefest This post was first published Common Dreams. We’re reprinting it here as part of our continuing coverage of the American Legislative Exchange Council, or ALEC. In 2012, Moyers & Company produced a documentary that revealed how corporations and state legislators are colluding to write laws and remake America, one statehouse at a time. Protesters carried signs and chanted “ALEC, go home” during an afternoon demonstration outside the Manchester Grand Hyatt Hotel on Wednesday. (Photo: Chris Stone/Times of San Diego) Fighting to protect dark money. These are just some of the “hot topics” on the agenda this week as conservative lawmakers, corporate lobbyists, and top GOP candidates from around the country gather in San Diego for the American Legislative Exchange Council (ALEC)’s annual meeting. ALEC, Busby explained, “is a ‘bill mill’ funded by corporations and billionaires. “This is a no ALEC zone. The United States of ALEC Deirdre Fulton is a staff writer for Common Dreams.

About The Sleuth Journal is an independent alternative media organization comprised of individuals and groups working to expose true news and corruption worldwide. We shed the light on truth in government, politics, world and local news, civil rights, natural health & organics and other important topics that the mainstream media fails or refuses to expose. This information is being presented to you in an effort for advancement in the understanding of our economic and political corruption, our Nation and World’s true news, social justice, human rights and the New World Order. It is our intent to connect, educate, motivate and inspire those who are interested in alerting the public to the pertinent issues that are affecting our lives and future, each and every day. We are a community of truth-seekers and peacemakers who share a commitment to nonviolent action and resistance- to push back against those who wish to suppress and control our lives, and take away our freedoms and civil rights.

​China v America’s cyber-hegemony — RT Op-Edge Eric Draitser is an independent geopolitical analyst based in New York City and the founder of StopImperialism.com. Published time: May 23, 2014 09:26 Reuters / Pichi Chuang This week’s indictment by a US grand jury of five Chinese military officials on charges of cyber espionage is both revealing and hypocritical. Moreover, these latest charges should be understood against the broader backdrop of Washington’s ‘pivot to Asia’, including the much-touted corporate monopoly ‘free trade’ of the Trans-Pacific Partnership. Seen in this context, the charges brought against Chinese military officials are more about protecting corporate interests and US hegemony than about protecting national security. Emperor has no clothes The indictment against the Chinese military officials is particularly noteworthy for the fact that it is the first time hacking and ‘cyber espionage’ charges have been brought against a state in this manner. National Security Agency. Making war in cyberspace

Koch's Dark Money and what it funds Smart Meter Health Alert Newly Released Documents Show Outgrowth of ‘Homeland Security’ Is Corrupted Federal and Local Law Enforcement By Pam Martens and Russ Martens: May 27, 2014 Washington, DC Police Pose Next to High Tech Equipment Provided by the U.S. Navy's Naval Research Laboratory to Monitor Protestors on September 27, 2002. Last week, the Partnership for Civil Justice Fund (PCJF) released a trove of some 4,000 documents it obtained under the Freedom of Information Act showing that the movements of the mostly peaceful participants in the Occupy Wall Street protests were subjected to an “enormous spying and monitoring apparatus” that included coordination between the Pentagon, FBI, Department of Homeland Security, local police, private security contractors and corporate interests. Increasingly, Americans’ time-honored First Amendment rights to peacefully assemble and dissent are playing out as open-season on protesters and mass arrests, followed by years of evidence destruction or tampering in court cases. As Wall Street On Parade perused the new documents from PCJF, one in particular raised red flags.

Money Men Say, Voters Move Over, It's Not Your Election! - BillMoyers.com David Koch gives a thumbs-up to Republican presidential candidate and former Godfather's Pizza CEO Herman Cain during the Defending the American Dream Summit at the Washington Convention Center November 4, 2011 in Washington, DC. (Photo by Chip Somodevilla/Getty Images) David Brooks is a worried man. Like many establishment Republicans, the conservative columnist for The New York Times sees the barbarians pouring through the gates and fears for both his party and the republic. There was Brooks on a recent edition of the PBS NewsHour, his angst spilling out across the airwaves like fog from a nightmare: “I wish we had gray men in suits,” he told Judy Woodruff, conjuring in some nostalgia-minded the courtly cabal of well-heeled businessmen who drafted war hero Dwight D. “We don’t have that,” Brooks continued. Ah, yes. How best to do this? Game’s over, voters: The oligarchs will decide this election. Count billionaire Charles Koch among them. Especially tax policy.

DHS Emails Reveal U.S. May Have Terrorist “Hands Off” List The Obama administration appears to have a terrorist “hands off” list that permits individuals with extremist ties to enter the country, according to internal Department of Homeland Security (DHS) documents obtained by a United States Senator. It’s unimaginable that any government would do this, but it seems like the Obama administration is constantly breaking new ground. The disturbing details of this secret initiative were made public this week by Iowa Senator Chuck Grassley, who has obtained DHS electronic mail discussing what could be a terrorist “hands off” list. The person was believed to be a member of the Muslim Brotherhood and a close associate and supporter Hamas, Hezbollah, and the Palestinian Islamic Jihad, according to the mail exchange obtained by Grassley’s office. It gets better. This is pure insanity and the senator has tried for months to get answers from DHS. He goes on to pass the buck to another agency, the Department of Justice (DOJ).