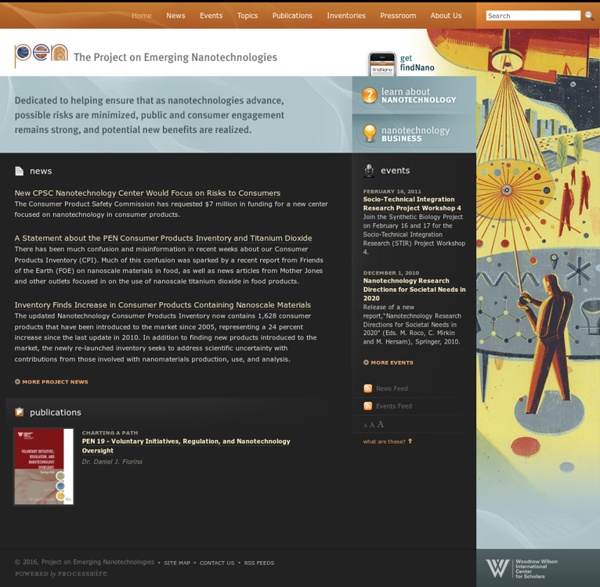 Nanoneural Upgrade You've always been told that you can "improve your mind" by learning, but a group of European scientists have decided to be more direct about it. They've learned that neural activity can be increased by grafting brain cells onto nano-tubes, thereby creating something that's half brain, half ultra-tech, all awesome. The work clamps a bunch of hippocampus cells to a fullerene nanotube. Trials have shown that the brain cells grow very effectively on the nanomaterial, indicating that this junction could be a biocompatible link between mind and machine. Even better, the single-walled nanotubes can actually accelerate signaling between neural cells.

Nanotechnology Aging is a cellular process, so the only way to stop it (or reverse it) may be on the cellular level. That’s where nanotechnology comes in. The term describes microscopic devices, materials, or even robots, that can revive cells, attack viruses, repair organs, even deliver precision drug or gene therapies. Nanorobots would also destroy cancer cells more effectively than any current treatment. For example, in 2004, researchers at Rice University sent gold “nanoshells” after tumors in mice. The shells bonded to the cancers and, when heated by a laser, were destroyed — taking the cancer cells with them.

History of PSYOP Psychological Operations or PSYOP are planned operations to convey selected information and indicators to audiences to influence their emotions, motives, objective reasoning, and ultimately the behavior of organizations, groups, and individuals. Used in all aspects of war, it is a weapon whose effectiveness is limited only by the ingenuity of the commander using it. A proven winner in combat and peacetime, PSYOP is one of the oldest weapons in the arsenal of man. The Most Interesting Developments in Nanotechnologies Nanomachine, nanogenerator, nanoelectronics – but most of all, the innovations relate to the field of nanomedicine. The most interesting developments (till now) in nanotechnologies in are: Nanomachine Researchers from the University of Groningen in the Netherlands and the Swiss Research Laboratory of Materials Science and Technology created a prototype of nano-sized car. It is a large molecule with four symmetrical elements that play a role of the wheels.

Nanotech ‘paints’ teeny tiny Mona Lisa GEORGIA TECH (US) — Scientists have “painted” the world’s most famous painting on a substrate surface approximately 30 microns in width—or one-third the width of a human hair. The “Mini Lisa” demonstrates a technique that could potentially be used to achieve nanomanufacturing of devices, researchers say, because they were able to vary the surface concentration of molecules on such short-length scales. The image was created with an atomic force microscope and a process called ThermoChemical NanoLithography (TCNL). Going pixel by pixel, the team positioned a heated cantilever at the substrate surface to create a series of confined nanoscale chemical reactions.

Alien-Like Skulls Unearthed In Mexico December 27, 2012 Image Caption: 300 Meters from the village of Onavas, archaeologists discovered a site with 25 human burials, 13 of whom have cranial deformation. This image shows cranial deformation in one of the human skulls. Credit: Cristina Garcia / INAH [Watch Video: Alien-Like Skulls Unearthed In Mexican Cemetery] Combining Nanowires and Memristors Could Lead to Brain-like Computing For decades now, researchers have been trying to get computers to behave like artificial brains instead of merely binary data crunchers. One of the obstacles in creating this capability has been that computers are based on silicon CMOS chips rather than the dendrites and synapses found in the human brain. One of the drawbacks with silicon chips is that they lack what is known as "plasticity" in which the brain's neurons adapt in order to learn and remember. To overcome such limitations, nanotechnology has been offering alternatives to silicon chip architecture that will more closely resemble the human brain. DARPA’s SyNAPSE project is one example.

For Autodesk, a Step Into a Nanoscale World “Project Cyborg” offers services like molecular modeling and simulation. Autodesk, a quirky software start-up in Marin County, north of San Francisco, rose to prominence in the early 1980s because of AutoCAD, its computer-aided design program that was intended for use on personal computers. Over the next decade, AutoCAD became the standard design tool for architects and engineers. This week at the TED conference in Long Beach, Calif., the company will take the first public step toward translating its computer design approach, which has since spilled over from Hollywood to the Maker movement, into the emerging nanoscale world of synthetic biology and materials. For the last two years, a small group of software engineers and molecular biologists have been developing a software system for designing at the molecular level at the company’s research laboratory in downtown San Francisco. The company has quietly begun working with a small group of molecular biologists in the last year.

Water, Oil and Gas, resource wars: the Stans of Central Asia « Law in Action Tajikistan's president, Emomali Rakhmon, likes things big. He has built the world’s tallest flagpole. Last year he opened the region’s largest library (with few books in it so far). But one gigantic project is proving contentious with the neighbours: building the world’s tallest hydroelectric dam.

Nanotechnology and DNA Sequencing for Cancer Treatment Cancer is still Canada’s number one killer. “Cancer affects everybody,” says Laura Syron, VP of Community Programs at the Princess Margaret Cancer Foundation. “Here at the Princess Margaret we’re doing everything we can to conquer cancer. We need everyone’s support to make that dream a reality.”

Repair DNA and Cells using Nanotech Home > Press > Nanobotmodels Company offer vision of future DNA and cell-repair techniques Abstract: Five decades of research and practical application of computers in biomedicine has given rise to the discipline of medical informatics, which has made many advances in genomic and translational medicine possible. Ukraine | Posted on March 15th, 2010 Nuclear waste: the 270-tonne legacy that won’t go away Rebecca Harms was 18 when she started campaigning for solutions to nuclear waste-storage in Germany. The Green Party MEP is now nearing her 56th birthday, but the country isn’t any closer to burying its radioactive waste. Last year – after decades of on-off drilling at the site of an old salt dome in north Germany and more than a billion euros of public money spent – the federal government announced it was starting from scratch with its search for a suitable site for a “deep geological repository” in which to store spent fuel.

Fine-tuning Nanotech to Target Cancer Programmable particle: Bind’s drug-delivery nanoparticle (artist’s rendering). The results of the human trials are startling. Even at a lower-than-usual dose, multiple lung metastases shrank or even disappeared after one patient received only two-hour-long intravenous infusions of an experimental cancer drug. Another patient saw her cervical tumor reduce by nearly 60 percent after six months of treatment. Though the drug trial—by Bind Biosciences in Cambridge, Massachusetts—of an experimental nanotechnology-based technique was designed simply to show whether the technology is safe, the encouraging results revive hopes that nanomedicine could realize its elusive promise.