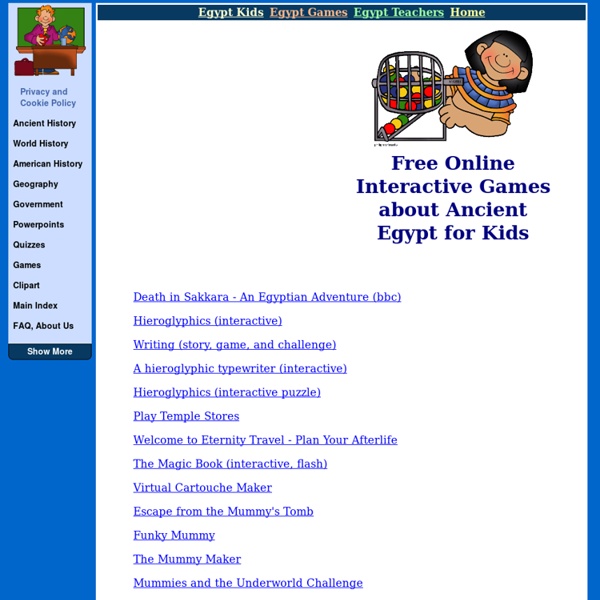 Using Games in the Classroom This article is taken from the introduction to "Geometry Games", a photocopiable resource published by The Association of Teachers of Mathematics . When I first started to work on the use of games in the classroom, I was amazed that so little justification existed for their use. The assumption seems to be that games are fun and so they are a good thing to do. Setting up games in the classroom is time consuming in terms of preparation of equipment and demanding from an organisational point of view. Also, in some ways, it leads to a loss of teacher control of pupil learning, as well as the loss of the volume of recorded pupil activity produced by more formal activities. World History: Ancient Egypt for Kids Back to History Ancient Egypt was one of the greatest and most powerful civilizations in the history of the world. It lasted for over 3000 years from 3150 BC to 30 BC. The Nile River The civilization of Ancient Egypt was located along the Nile River in northeast Africa. The Nile was the source of much of the Ancient Egypt's wealth.

The Egyptian Number System Learn about the Egyptian Number System © 2012 This website is produced by the Student Recruitment, Admissions and International Development Division at The University of Manchester Ancient Times This lesson plan may be used to address the academic standards listed below. These standards are drawn from Content Knowledge: A Compendium of Standards and Benchmarks for K-12 Education: 2nd Edition and have been provided courtesy of theMid-continent Research for Education and Learningin Aurora, Colorado. Grade level: 3-5Subject area: historyStandard: Understands selected attributes and historical developments of societies in Africa, the Americas, Asia, and Europe.Benchmarks: Knows about life in urban areas and communities of various cultures of the world at various times in their history. Knows significant historical achievements of various cultures of the world.

Games to Learn Spanish - Qué Onda Qué Onda Spanish Log In | Sign Up Games to Learn Spanish Who says learning Spanish can't be all fun and games? With these games you can continue studying all the lessons we offer while having fun. Ancient Egypt Activities for Kids BBC Pyramid challenge Journey back four and a half thousand years to Egypt's Old Kingdom, to the Pyramid Age. As the vizier, or head of state, you undertake the most important project of your career - the building of the king’s pyramid. Make a paper model of a Pharaoh's Death Mask This site has links to the instruction to make a paper model of a Pharaoh's Death Mask. Wheel Of Pharaoh This lesson plan may be used to address the academic standards listed below. These standards are drawn from Content Knowledge: A Compendium of Standards and Benchmarks for K-12 Education: 2nd Edition and have been provided courtesy of theMid-continent Research for Education and Learningin Aurora, Colorado. Grade level: K-4Subject area: HistoryStandard: Understands selected attributes and historical developments of societies in Africa, the Americas, Asia, and Europe.Benchmarks: Knows significant historical achievements of various cultures of the world (e.g., the Hanging Gardens of Babylon, the Taj Mahal in India, the pyramids in Egypt, the temples in ancient Greece, the bridges and aqueducts in ancient Rome). Grade level: 5-6Subject area: Historical understandingStandard: Understands the historical perspective.Benchmarks: Understands that specific individuals had a great impact on history.

Quest to Learn - insideschools.org Quest to Learn offers a new approach to education based on the principles that make video games enjoyable. It's a radical experiment that may sound flaky, but Q2L is not an oasis for students looking to play video games all day. It's a place where kids learn traditional subjects like history, algebra and chemistry—albeit in an untraditional way. "It's a common misconception about this school that you're going to come here and you're going to play video games to learn," explained one of the school's founders and co-directors, Arana Shapiro. "When we talk about games, we're talking about game-like learning--not about playing games but about looking at what makes games engaging for learning." For example, students pretend they are spies in ancient Greece and re-enact the Peloponnesian War, learning about Athens and Sparta and the difference between oligarchy and democracy in the process.

Key stage 2 (age 7-11) Teachers' notes: Ancient Egypt, week 1: what do we know? A new history In September 2002, it was reported that British archaeologists had discovered a new pyramid tomb and a surrounding necropolis (city of the dead). The intended excavations could tell us still more. A remotely operated robot camera is being used to explore small passageways in the pyramids to see if there are further chambers. Organisation Children should be shown where Egypt is on a world map or atlas.