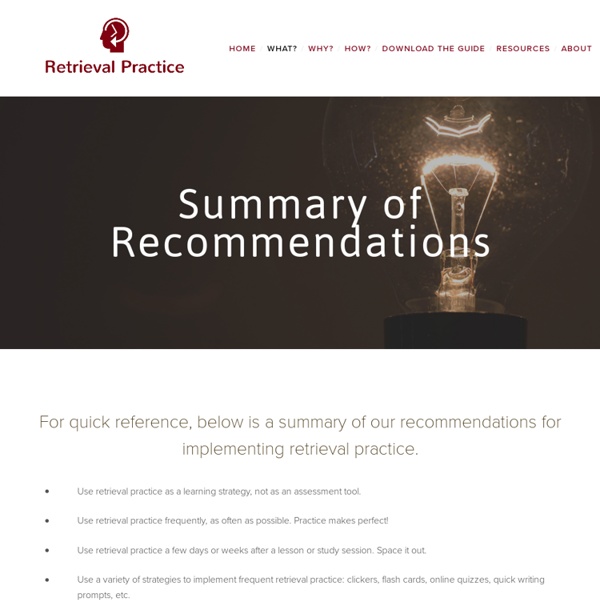 Use retrieval practice as a learning strategy, not as an assessment tool.Use retrieval practice frequently, as often as possible. Practice makes perfect!Use retrieval practice a few days or weeks after a lesson or study session. Space it out.Use a variety of strategies to implement frequent retrieval practice: clickers, flash cards, online quizzes, quick writing prompts, etc.Use a variety of question types: fact-based, conceptual, and higher order/transfer.Encourage metacognition by including feedback (right/wrong feedback, explanation feedback, etc.).Remain confident that challenging learning (via retrieval practice) is a good thing!Examine your teaching and studying strategies: Do they focus on getting information “in” or “out?" For more information, please browse additional sections of this website, including Strategies for Educators, FAQs, and Download the Guide. Related:  michaelcrabtree1 • realeye5ed

Character Day Character Day is an annual global day devoted to developing who we are and who we want to be in the world. Character Day 2016 is set for September 22! Sign up your school, classroom, organization, company, congregation, or family to participate. It's completely free! Watch 1 min trailer that explains what Character Day is: - Free award-winning short films about character from different perspectives - Hands-on Discussion Kits with conversation cards and poster - Robust hub of online resources for building character strengths - A global online Q&A to unify all the conversations Create an event that works for you. These films premiered as part of Character Day 2015 at 6,784 events in 41 countries. The films are available with subtitles in Arabic, Chinese, English Captions, French, German, Hebrew, Hindi, Russian, Spanish, and Swahili. Participants of Character Day also receive hands-on discussion kits (for free!). HIGHLIGHTS FROM CHARACTER DAYS 2014 and 2015:

Michael Jackson, George Michael, Prince and more: readers share their favourite albums turning 30 | Music This week marks 30 years since Michael Jackson’s Bad album confirmed the King of Pop as one of the most successful artists of all time. But Jackson was not the only artist to produce a classic 1987 album. Both the Beastie Boys and Public Enemy enjoyed successful hip-hop breakthroughs, Bruce Springsteen released his ultimate break-up album, and the Morrissey/Marr partnership managed one last hurrah before consigning the Smiths to history. To celebrate these releases, we asked readers to name their favourite albums from 1987 and explain why they still matter 30 years on. Michael Jackson – Bad It was an album worthy of breaking all records. Prince – Sign o’ the Times This album has got it all – synth-drums, funk, psychedelia, rock and mainstream pop, combined and curated in the idiosyncratic, slick and multifaceted style that only Prince had. Fleetwod Mac – Tango in the Night Nothing was going to reach the heights of Rumours, but I believe this album is underrated. Whitney Houston – Whitney

How to Get Past Negativity Bias in Order to Hardwire Positive Experiences It’s helpful to know that the brain is plastic and can adapt to challenges. And when it comes to learning new things, we can build up mental resources through intentional effort. People can get better at realizing self-regulation, executive functions, a sense of perspective or meaning, positive emotions like gratitude, a sense of strength and the feeling of being cared about. “Any kind of mental activity, including experiences, entails underlying neural activity,” said Rick Hanson, a psychologist and senior fellow at the Greater Good Science Center at UC Berkeley, at a Learning & the Brain conference. He has developed practices to help people build up their mental capacity for happiness by creating patterns of neural activity that with time and repetition become neural pathways. Hanson calls this process “self-directed neuroplasticity.” “We evolved a brain that routinely scans for bad news, both internally and externally,” Hanson said. “We overreact to unpleasant stimulus,” Hanson said.

The Choice Explosion Lansing, W.Va. — A few years ago, the social psychologist Sheena Iyengar asked 100 American and Japanese college students to take a piece of paper. On one side, she had them write down the decisions in life they would like to make for themselves. On the other, they wrote the decisions they would like to pass on to others. The Americans filled up the side for decisions they want to decide for themselves. The Japanese filled up the back side of the sheet with things they wanted others to decide: what they wore; what time they woke up; what they did at their job. Americans have always put great emphasis on individual choice. This opening has produced much that is wonderful. It’s becoming incredibly important to learn to decide well, to develop the techniques of self-distancing to counteract the flaws in our own mental machinery. For example, they mention the maxim, assume positive intent. They highlight Suzy Welch’s 10-10-10 rule. The Heaths recommend making deliberate mistakes.

Why Straight Rural Men Have Gay 'Bud-Sex' With Each Other -- Science of Us A lot of men have sex with other men but don’t identify as gay or bisexual. A subset of these men who have sex with men, or MSM, live lives that are, in all respects other than their occasional homosexual encounters, quite straight and traditionally masculine — they have wives and families, they embrace various masculine norms, and so on. They are able to, in effect, compartmentalize an aspect of their sex lives in a way that prevents it from blurring into or complicating their more public identities. Sociologists are quite interested in this phenomenon because it can tell us a lot about how humans interpret thorny questions of identity and sexual desire and cultural expectations. Last year, NYU Press published the fascinating book Not Gay: Sex Between Straight White Men by the University of California, Riverside, gender and sexuality professor Jane Ward. In other words: It’s not gay if the guy you’re having sex with doesn’t seem gay at all.

Drawing a Mind Map from Start to Finish As the subject matter for this Mind Map I decide to investigate what a “Curious Brain” is and how it could impact continual learning and development Starting with a central image that best represents the subject being explored; in this case I have used an illustration of a brain and have started to add main branches (initially I work in pencil so that adjustments can be made if necessary before adding ink and colour) To avoid the Mind Map becoming crowded and particularly if you are using it as a memory aid, it is preferable to have no more than 11 main branches I start to consider what a Curious Brain is. The easiest way to investigate this is simply to start adding keywords and branching out without too much contemplation or the mind starts to think in a linear fashion. The beauty and diversity of using Mind Maps is that it encourages radial thinking which uncovers wider and more interesting ideas. Look comes to mind, so I then add that keyword and branch out further And positive

How to Turn on the Part of Your Brain That Controls Motivation We know we should put the cigarettes away or make use of that gym membership, but in the moment, we just don’t do it. There is a cluster of neurons in our brain critical for motivation, though. What if you could hack them to motivate yourself? The researchers stuck 73 people into an fMRI, a scanner that can detect what part of the brain is most active, and focused on that area associated with motivation. “They weren’t that reliable when we said, ‘Go! That changed when the participants were allowed to watch a neurofeedback meter that displayed activity in their ventral tegmental area. “Your whole mind is allowed to speak to a specific part of your brain in a way you never imagined before. Using an fMRI for this kind of brain feedback is more effective than other, older tools like placing electrodes on the skull or EEG, Gabrieli says. Two of the researchers, Kathryn Dickerson and Jeff MacInnes, tried the system out on themselves. It was also exhausting, MacInnes says. Copyright 2016 NPR.

Want to be More Productive? Here are 60 Keyboard Shortcuts You Need to Know! Seconds add up. If you can find ways to shave off a few seconds here and there, you’ll be well on your way to being faster and more efficient at your job. That’s what’s so great about keyboard shortcuts. Every day your work probably requires you to navigate lots of different operating systems, browsers, and software. Think about it. Where the heck is that thing you’re always looking for? This way of doing things is for the donkeys. Wouldn’t it be great if there were a “cheat sheet” that compiled the most essential keyboard shortcuts? Lucky for you, someone has done just that. Whether it’s Windows, Mac, popular Microsoft programs (including Word, Excel, and PowerPoint), Google Chrome, or Gmail, this infographic has you covered. Check out all these invaluable keyboard shortcuts that will boost your productivity, including how to: Create a new folder in Windows.Take a screenshot on a Mac.Insert a new slide in PowerPoint.Find something in Chrome.Add bolding, italics, or underlines in Gmail.

Understanding by Design Part 2: Designing the Essential Questions - Learning Bird Value and benefits of questions Since Socrates, asking questions has been a hallmark of the teaching profession. Whether used to guide students through a lecture or to check for understanding on exams, questions are the primary mode of encouraging information transfer from instructor to student and from topic to topic. What is a “good” question? The best questions, then, create connections. Types of Questions Although we want to focus on building “essential questions”, let’s take a moment and look at the different types of questioning used in classrooms. 1) Knowledge/Comprehension Questions Knowledge questions are useful to help teachers determine a student’s grasp of a piece of content knowledge, according to Crowe & Stanford, but both knowledge questions and comprehension questions are limited to recall of knowledge. 2) Socratic Questioning 3) Big Idea or Essential Questions Synthesis questions and evaluation questions require higher level thought from students. Writing Essential Questions