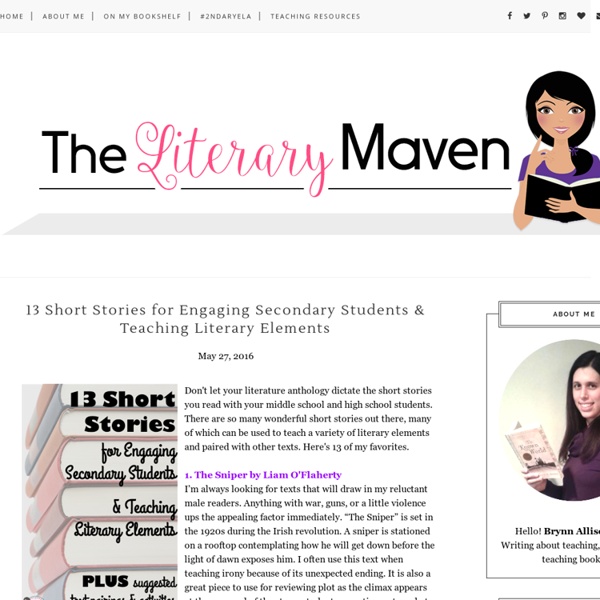 Don't let your literature anthology dictate the short stories you read with your middle school and high school students. There are so many wonderful short stories out there, many of which can be used to teach a variety of literary elements and paired with other texts. Here's 13 of my favorites.1. The Sniper by Liam O'Flaherty I’m always looking for texts that will draw in my reluctant male readers. This short story is one that I like to read just before the holidays because of its message about giving and thinking of others. “The Interlopers” is a short story that is sure to hook reluctant readers. 4. This is one of my absolute favorite short stories to dig into. Literary criticism can be a complex idea to introduce to students. This short story is full of imagery and symbolism, and also great for teaching the different types of conflict. “Geraldo No Name” is one vignette from The House on Mango Street by Sandra Cisneros. The idea behind this short story has always fascinated me. 12. Related:  Short Stories • Reading 2 • Reading

The Sniper--Liam O'Flaherty (1897-1984) The Sniper by Liam O'Flaherty (1897-1984) Approximate Word Count: 1619 The long June twilight faded into night. On a rooftop near O'Connell Bridge, a Republican sniper lay watching. He was eating a sandwich hungrily. Placing a cigarette between his lips, he struck a match, inhaled the smoke hurriedly and put out the light. Cautiously he raised himself and peered over the parapet. He rolled over the roof to a chimney stack in the rear, and slowly drew himself up behind it, until his eyes were level with the top of the parapet. Just then an armored car came across the bridge and advanced slowly up the street. Then round the corner of a side street came an old woman, her head covered by a tattered shawl. The turret opened. Suddenly from the opposite roof a shot rang out and the sniper dropped his rifle with a curse. Dropping flat onto the roof, he crawled back to the parapet. Quickly he drew his knife from his pocket, opened it on the breastwork of the parapet, and ripped open the sleeve.

English 214 Discussion Questions On this page, you will find links to the discussion questions that go along with the readings. Please answer all the questions as thoughtfully as possible, after reading the lectures. Then submit your answers by the deadline (the due dates are on the DQ pages and on the Class Schedule). Each set of discussion questions is worth a possible 20 points. Other online students will be submitting their answers to the group as well; you should read them. Respond thoughtfully to several other postings. We will be using the ETUDES Discussion Board for this class. Discussion Board NOTE: try the Message Board ASAP! Discussion question answers are due BEFORE MIDNIGHT on the dates when they are scheduled. Late answers and responses will receive 0 points, so be sure to get them in on time. Points will be assigned according to the thoughtfulness of your answers and responses, not by whether they are "right" or not, since sometimes there is no "right" answer.

The Interlopers by Saki He strayed away by himself from the watchers whom he had placed in ambush on the crest of the hill, and wandered far down the steep slopes amid the wild tangle of undergrowth, peering through the tree trunks and listening through the whistling and skirling of the wind and the restless beating of the branches for sight and sound of the marauders. If only on this wild night, in this dark, lone spot, he might come across Georg Znaeym, man to man, with none to witness - that was the wish that was uppermost in his thoughts. And as he stepped round the trunk of a huge beech he came face to face with the man he sought. The two enemies stood glaring at one another for a long silent moment. Relief at being alive and exasperation at his captive plight brought a strange medley of pious thank-offerings and sharp curses to Ulrich's lips. "So you're not killed, as you ought to be, but you're caught, anyway," he cried; "caught fast. And he laughed again, mockingly and savagely. "They hear us!

Meet Google Drive – One place for all your files One account. All of Google. Sign in to continue to Google Drive Find my account Forgot password? Sign in with a different account Create account One Google Account for everything Google short stories at east of the web A game of Scrabble has serious consequences. - Length: 4 pages - Age Rating: PG - Genre: Crime, Humor A semi-barbaric king devises a semi-barabaric (but entirely fair) method of criminal trial involving two doors, a beautiful lady and a very hungry tiger. - Length: 7 pages - Genre: Fiction, Humor ‘Bloody hell!’ - Genre: Humor Looking round he saw an old woman dragging a bucket across the floor and holding a mop. - Length: 3 pages Henry pours more coal onto the hearth as a gust of wind rattles through the cracked window frame. - Length: 14 pages - Genre: Horror ulissa Ye relished all the comfortable little routines and quietude defining her part-time job at The Bookery, downtown’s last small, locally-owned bookstore. - Length: 8 pages - Age Rating: U The forest looked ethereal in the light from the moon overhead. - Length: 15 pages - Age Rating: 18 Corporal Earnest Goodheart is crouched in a ditch on the edge of an orchard between Dunkirk and De Panne. - Genre: Fiction - Length: 20 pages

The Gift of the Magi by O. Henry There was a pier-glass between the windows of the room. Perhaps you have seen a pier-glass in an $8 Bat. A very thin and very agile person may, by observing his reflection in a rapid sequence of longitudinal strips, obtain a fairly accurate conception of his looks. Della, being slender, had mastered the art. Suddenly she whirled from the window and stood before the glass. Now, there were two possessions of the James Dillingham Youngs in which they both took a mighty pride. So now Della's beautiful hair fell about her, rippling and shining like a cascade of brown waters. On went her old brown jacket; on went her old brown hat. Where she stopped the sign read: 'Mme Sofronie. "Will you buy my hair?" "I buy hair," said Madame. Down rippled the brown cascade. "Twenty dollars," said Madame, lifting the mass with a practised hand. "Give it to me quick" said Della. Oh, and the next two hours tripped by on rosy wings. She found it at last. Jim was never late. "You've cut off your hair?"

CurriConnects Book List Other listsIdeas for using this list More on LexilesMore on ESL levels Immigrants and ImmigrationDiscover fiction about life as an immigrant in America. Use this list as you study any of several time periods when the U.S. experienced waves of immigrants or for literature circles about multiculturalism and the immigrant experience in the U.S. Preschool and Picture Books The Castle on Hester Street - Linda Heller, (978-0689874345) , FictionInterest level: 0-4, Lexile: 520, ESL level: 2Julie enjoys her grandfather's tales about their journey from Russia to New York City, but she also enjoys her grandmother's contradictory reactions to her husband's wild tales. In the Small, Small Night - Jane Kurtz, (978-0066238142) , FictionInterest level: 0-12, Lexile: 560, ESL level: 2 - 3Older sister Abena helps Kofi sleep by sharing with him two stories from their native Ghana after they move to the U.S. Early Elementary Books Good-bye, Havana! When This World Was New - D.H. A Difficult Boy - M.P.

The Lady Or The Tiger? by Frank Stockton When all the people had assembled in the galleries, and the king, surrounded by his court, sat high up on his throne of royal state on one side of the arena, he gave a signal, a door beneath him opened, and the accused subject stepped out into the amphitheater. Directly opposite him, on the other side of the enclosed space, were two doors, exactly alike and side by side. It was the duty and the privilege of the person on trial to walk directly to these doors and open one of them. But, if the accused person opened the other door, there came forth from it a lady, the most suitable to his years and station that his majesty could select among his fair subjects, and to this lady he was immediately married, as a reward of his innocence. This was the king's semi-barbaric method of administering justice. The institution was a very popular one. This semi-barbaric king had a daughter as blooming as his most florid fancies, and with a soul as fervent and imperious as his own. All was ready.

Essential Elements of Guided Reading There are three essential elements in Guided Reading, they are before reading, during reading, and after reading. Here we will take a look at teacher and student roles during each element, along with a few activities for each, as well compare the traditional reading group with a dynamic guided reading group. Element 1: Before Reading This when the teacher introduces the text and takes the opportunity to teach students before the reading begins. Teacher's Role To select an appropriate text for the group.Prepare an introduction to the story they are going to read.Briefly introduce the story to the students.To leave a few questions unanswered that can be answered throughout the story. Student's Role To engage in a conversion with the group about the story.Raise questions about the story to be read.Build expectations about the text.To notice information in the text. Activity to Try: Word Sort. Element 2: During Reading Read the text to themselves quietly or softly.To request help if needed.

short stories amazon The Black Cat by Edgar Allan Poe by Edgar Allan Poe(published 1845) FOR the most wild, yet most homely narrative which I am about to pen, I neither expect nor solicit belief. Mad indeed would I be to expect it, in a case where my very senses reject their own evidence. Yet, mad am I not -- and very surely do I not dream. But to-morrow I die, and to-day I would unburthen my soul. My immediate purpose is to place before the world, plainly, succinctly, and without comment, a series of mere household events. From my infancy I was noted for the docility and humanity of my disposition. I married early, and was happy to find in my wife a disposition not uncongenial with my own. This latter was a remarkably large and beautiful animal, entirely black, and sagacious to an astonishing degree. Pluto -- this was the cat's name -- was my favorite pet and playmate. One night, returning home, much intoxicated, from one of my haunts about town, I fancied that the cat avoided my presence. In the meantime the cat slowly recovered.