Stanford on iTunes U 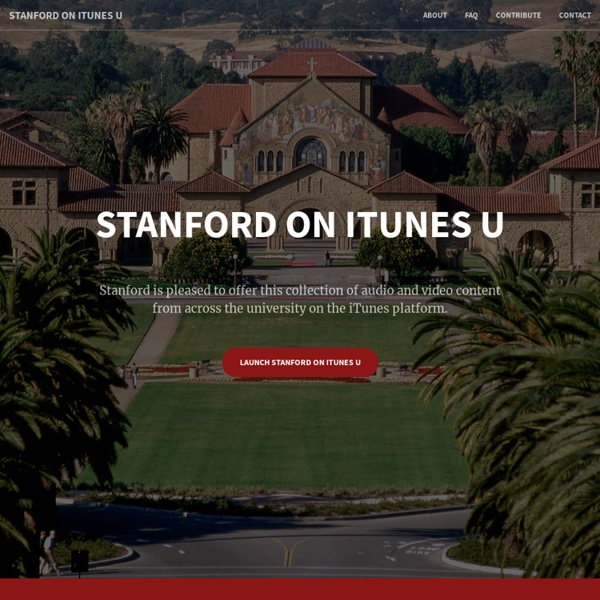 Brains in Silicon Welcome to Brains in Silicon. Learn about the lab, get to know the brains that work here, and find out about new projects that you could join. We have crafted two complementary objectives: To use existing knowledge of brain function in designing an affordable supercomputer—one that can itself serve as a tool to investigate brain function—feeding back and contributing to a fundamental, biological understanding of how the brain works. Media & Values CML's most recent work is contained in the CML MediaLit Kit, but all of CML's work has its roots in Media&Values magazine. As Media&Values evolved over its 15-year history during the 70's, 80's and 90's, it documented many issues still important and relevant today, and grew from a potpourri of interesting tidbits to a publication with extensive editorial crafting as an educational resource. Media&Values is a direct reflection of the early days of media literacy in the United States, and it provided a foundation for a national movement.

250 Free Online Courses from Top Universities Get 1200 free online courses from the world's leading universities -- Stanford, Yale, MIT, Harvard, Berkeley, Oxford and more. You can download these audio & video courses (often from iTunes, YouTube, or university web sites) straight to your computer or mp3 player. Over 30,000 hours of free audio & video lectures, await you now. Humanities & Social Sciences Art & Art History Courses Oxford Internet Institute Here you will find webcasts of the Internet pioneers, scholars and regulators who have spoken at the Oxford Internet Institute, covering areas such as: social media, internet regulation, safety and security online, e-government and democracy, civil society, open access, e-learning, citizen journalism, and the future of the Internet itself. You can browse all webcasts, search, or browse by category. To view the embedded webcasts you will need Adobe Flash Player and Javascript enabled in your browser, but we also offer downloadable formats such as MP4, for which we recommend QuickTime 7 or VLC Player.

Recruiting programmers to your startup Here are some things I’ve learned over the years about recruiting programmers* to startups. This is a big topic: many of the points I make briefly here could warrant their own blog posts, and I’m sure I’ve omitted a lot. - The most important thing to understand is what motivates programmers. This is where having been a programmer yourself can be very helpful. In my experience programmers care about 1) working on interesting technical problems, 2) working with other talented people, 3) working in a friendly, creative environment, 4) working on software that ends up getting used by lots of people. Like everyone, compensation matters, but for programmers it is often a “threshold variable”.

Stanford University Stanford University (officially Leland Stanford Junior University) is a private research university in Stanford, California, and one of the world's most prestigious institutions,[8][9][10][11] with the top position in numerous surveys and measures in the United States.[12][13][14][15][16][17][18] Stanford was founded in 1885 by Leland Stanford, former governor of and U.S. senator from California and leading railroad tycoon, and his wife, Jane Lathrop Stanford, in memory of their only child, Leland Stanford, Jr., who had died of typhoid fever at age 15 the previous year. Stanford was opened on October 1, 1891[2][3] as a coeducational and non-denominational institution. Stanford is located in northern Silicon Valley near Palo Alto, California.

100 Websites You Should Know and Use Entertainment Meet David Peterson, who developed Dothraki for Game of Thrones There are seven different words in Dothraki for striking another person with a sword. Among them: “hliziﬁkh,” a wild but powerful strike; “hrakkarikh,”a quick and accurate strike; and “gezrikh,” a fake-out or decoy strike. 100 Incredible Lectures from the World’s Top Scientists Posted on Thursday June 18, 2009 by Staff Writers By Sarah Russel Unless you’re enrolled at one of the best online colleges or are an elite member of the science and engineering inner circle, you’re probably left out of most of the exciting research explored by the world’s greatest scientists. But thanks to the Internet and the generosity of many universities and online colleges, you’ve now got access to the cutting edge theories and projects that are changing the world in this list below. If you’re looking for even more amazing lectures, check out our updated list for 2012 with more talks from great minds. General

Top 10 Universities With Free Courses Online #1 UC Berkeley Ranked as the #1 public school in the United States, Berkeley offers podcasts and webcasts of amazing professors lecturing. Each course has an RSS feed so you can track each new lecture. Top 10 Developer and Engineering Skills Employers Will Look for Going into 2012 Job listings give a view into company strategy and the direction of the overall market. Indeed is a job listing service that provides excellent analysis of top job skills. For our purposes, we looked at Indeed’s top 10 listings to give a glimpse into the top 10 developer and engineering skills that employers are looking for going into the new year. HTML5

Virtue Ethics 1. Preliminaries Virtue ethics' founding fathers are Plato and, more particularly Aristotle (its roots in Chinese philosophy are even more ancient) and it persisted as the dominant approach in Western moral philosophy until at least the Enlightenment. It suffered a momentary eclipse during the nineteenth century but re-emerged in the late 1950's in Anglo-American philosophy. It was heralded by Anscombe's famous article “Modern Moral Philosophy” (Anscombe 1958) which crystallized an increasing dissatisfaction with the forms of deontology and utilitarianism then prevailing. Its re-emergence had an invigorating effect on the other two approaches, many of whose proponents then began to address these topics in the terms of their favoured theory.

Free Online MIT Course Materials Comparative Media Studies is the examination of media technologies and their cultural, social, aesthetic, political, ethical, legal, and economic implications. At MIT, students are trained to think critically about properties of all media and about the shared properties of different media, as well as the shared properties and functions of media more generally, both within one period of time and across generations. MIT Comparative Media Studies offers both undergraduate degree opportunities, as well as a two-year course of study leading to an SM degree.