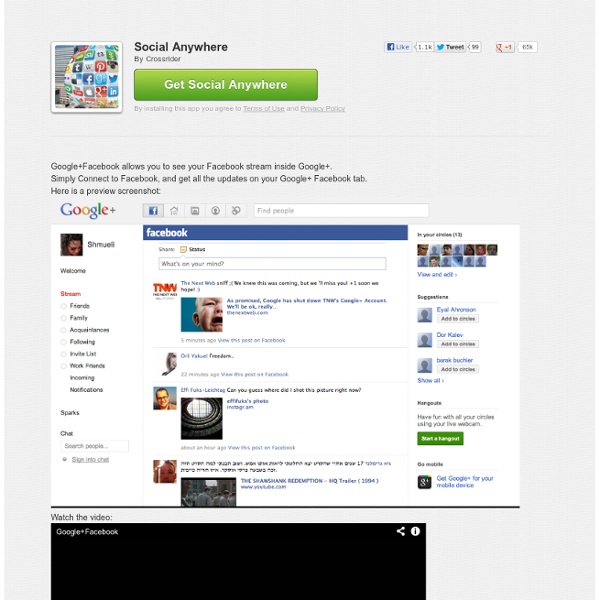 How can I become a member? New ucardo members get the first 30 days free of charge for testing all functions. Registration is also free of charge, there are no registrations fees to expect. If ucardo does not sit well with you, at every time you have the possibility to delete the account on your own. Creating your personal ucardo user account is done in a few steps. The layout of your personal online businesscard is done very easy with a simple drag & drop editor. The generated QR Code is unique and redirects immediately to your personal ucardo online businesscard. Now you have the possibility to field your code as flexible and creative as you want.

Google Plus Business Profiles Are Coming Q3, Analytics and All Companies clamoring to build a presence on Google's new social network have a few more months to wait. Business profiles are coming to Google Plus around the third quarter of this year, according to a story on VentureBeat. While Google hasn't revealed many details about what the brand profiles will include, a Google representative told VentureBeat that users should expect "a level of analytics and measurement that you'd typically find in Google products," hinting at the inclusion of analytics in business accounts. Google is urging brands to wait for these official business profiles rather than set up their own, which the company said would not be able to be automatically migrated once the brand profiles launch. The absence of business profiles on Google Plus has been a point of contention for some brands and media outlets, a handful of which decided to set up their own profiles, despite Google's wishes.

BTProximity : Dave Amenta .com BTProximity is an application for Windows Vista and Windows 7 that can detect when your bluetooth-enabled phone has come into range, and unlock your computer. When the device moves out of range, the computer is automatically locked. This isn’t a fake lock window, the desktop is actually locked the same as if you pressed Win+L. BTProximity is donationware, if you like it, please donate! Download (Windows 7/8 – x86 and x64) BTPrximity is no longer for download. Notes - The device needs to be paired with Windows first, then it will show up in the devices list. - Be sure to install the unlock component if you’d like to automatically unlock. - Be sure to set the credentials to unlock. - Setting the check interval too high may lead to poor battery life. - “Faster Unlock” will unlock as soon as the device has been seen, without an additional check. - Domain logon is not supported, only a local user account may be authenticated.

Google+ Designer: The 4 Problems In Social Networking That We Fixed | Co. Design Google+! Everyone's doing it! No seriously: it went from zero users to zillions in a matter of days. Not bad for a me-too social network entering a space already inhabited by two 900-pound gorillas. Granted, just because of its sheer size and ubiquity, Google would have had no trouble populating its new social network even if it totally sucked. 1. Between Foursquare, Quora, Color, Stellar, and the rest, the only sane answer to "hey, we're launching a new social network!" "We wanted to make a delightful experience that feels addicting." "We wanted to make a delightful experience that rewards people -- we wanted to make it feel addicting," says Hertzfeld, who took the lead on designing the Circles interface. 2. Videochatting may be everywhere now, but it still freaks a lot of people out because it's unnervingly intimate and the social norms for initiating contact still haven't been worked out. 3. The videochat feature replaces a phone-call-like experience with a much more passive model. 4.

Instantbird Twitter's Biggest Rival Thinks Google Plus Could Become Fastest Growing Network in History Bill Gross is the founder of prolific business incubator Idealab and its Twitter app builder and buyer Ubermedia; he's wrangled with Twitter headquarters over access to the Twitter API and reportedly tried (unsuccessfully) to outbid Twitter to acquire leading desktop Twitter client Tweetdeck. But can you guess what Gross is hot on now? Google Plus - the new Google social network launched late last month that's been stealing the hearts, minds and time of many Twitter power players. Gross's prediction also makes me wonder what he's going to do about it. How to Make Friends & Influence People There are currently 15 social networks around the world that have more than 100 million users. One question this list begs, though, is why another 100 million member network would disrupt Facebook when these other 14 haven't. "I predict that Google Plus will go from 0 to 100,000,000 users faster than any other service in history," Gross wrote this morning on his Plus page. "The service is great.

File Repair - easily repair corrupted files. Marshall Kirkpatrick, Technology Journalist » Google Plus’s Real Goal is Not to Kill Facebook, but to Force it to Open I’ve been so focused on the user experience of Google’s new social network Plus that I haven’t thought very much about the big picture, I must admit. Listening tonight to an interview with Plus designer Joseph Smarr on the IEEE Podcast it became clear to me that for at least some of Plus’s leadership the goal is not to win social networking outright, or to kill any competitors, but to disrupt the social networking economy with a big enough, good enough and popular enough service that the walled gardens (Facebook in particular) are forced to open up interoperability enough that their users can communicate with the significant enough number of people in their lives that use a different social network. Back in the bad old days, customers of one phone network couldn’t call customers of other phone networks, then people couldn’t email out-of-network. Today people can’t be social across networks, but few people mind because everyone they care about is on Facebook.