Why are white people expats when the rest of us are immigrants? 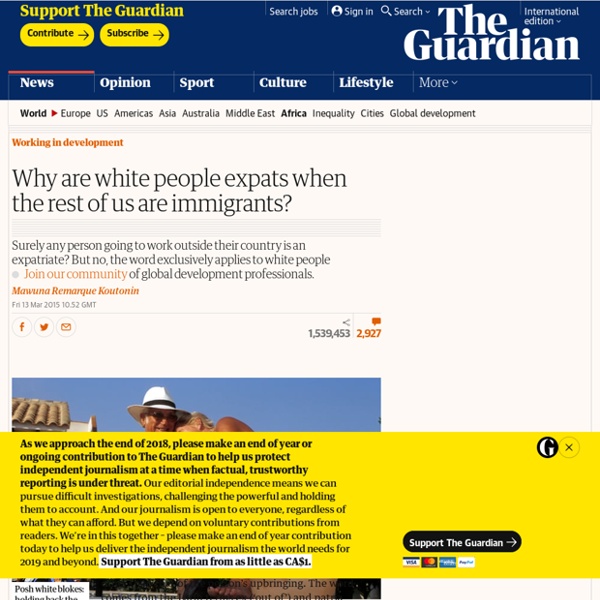 In the lexicon of human migration there are still hierarchical words, created with the purpose of putting white people above everyone else. One of those remnants is the word “expat”. What is an expat? And who is an expat? According to Wikipedia, “an expatriate (often shortened to expat) is a person temporarily or permanently residing in a country other than that of the person’s upbringing. The word comes from the Latin terms ex (‘out of’) and patria (‘country, fatherland’)”. Defined that way, you should expect that any person going to work outside of his or her country for a period of time would be an expat, regardless of his skin colour or country. Africans are immigrants. Don’t take my word for it. The reality is the same in Africa and Europe. Most white people deny that they enjoy the privileges of a racist system.

The battle over the words used to describe migrants - BBC News Images of people scrambling over barbed wire fences in Calais or crossing the Mediterranean in fishing boats have dominated the media over the last few months. And a debate has even emerged about the very words used to describe people. The word migrant is defined in Oxford English Dictionary as "one who moves, either temporarily or permanently, from one place, area, or country of residence to another". It is used as a neutral term by many media organisations - including the BBC - but there has been criticism of that use. News website al-Jazeera has decided it will not use migrant and "will instead, where appropriate, say refugee". An online editor for the network wrote: "It has evolved from its dictionary definitions into a tool that dehumanises and distances, a blunt pejorative."

Writer Creates “Color Thesaurus” To Help You Correctly Name Any Color Imaginable Ingrid Sundberg, a writer and children’s book illustrator, created a very useful infographic chart for anyone struggling with color names. The writer says that she loves to collect words that can help give her stories variety and depth. “I’ve learned that we all have different associations with color words,” Sundberg told Bored Panda. “For example the color sapphire is a light blue to me (since that’s the color of the sapphire on my engagement ring), but a sapphire can also be a very dark blue. I doubt there can be an ‘official color guide,’ as color is so subjective.” This is what would happen if Australia halted immigration Crowds thin in international airport arrival halls. Visa processing offices fall silent. Refugees must seek a new safe haven.

Why do politicians speak the way they do? 13 February 2015Last updated at 23:00 ET Election mania is just around the corner, with politicians making their pitches for the public's votes. What are the techniques they use to try and snare people's attention, asks David Stenhouse. Rhyme and Repeat Guide for Writers: Latin Phrases It’s a matter of taste and style, but not long ago American writers attempted to demonstrate their credentials to the world by including Latin and French phrases within works. A dash of Latin was expected of the moderately educated throughout the Western world. annus mirabilis - wonderful year arbiter elegantiae - judge of the elegant; one who knows the good things in life bona fides - good faith; credentials

Immigrants don't harm economies. In fact, the opposite may be true Immigrants have become a major scapegoat in recent years for sputtering Western economies. From the U.K.’s jarring “Brexit” from the European Union to Donald Trump’s infamous wall and more recent proposal to apply “extreme vetting” to those wishing to enter the U.S., many politicians have found success by casting immigrants as a threat to the physical, social and economic welfare of natives. In short, Americans (and our European brethren) are unhappy, and many are convinced immigration brings harm. A recent poll found that almost two-thirds of Americans think immigration, including the legal kind, “jeopardizes the United States.” While it has become a popular notion in the West that immigrants jeopardize the job prospects of natives, over 30 years of economic research (including my own) gives strong reason to believe otherwise.

Department of Linguistics Some general features of spoken English Backchannels Listeners may show the speaker that they are listening and understanding by saying mmm or little words like yeah, usually skilfully placed at the end of a clause. These are called backchannels or, sometimes, minimal responses. ******A map of the world according to second languages Language remains an inescapable leftover of conquest and empire. Algeria's second language is French - a remnant of France's occupation - and much of Africa speaks English, Italian or French as a result of their colonialism alongside their many countries' native tongues. MoveHub, an online resource for people looking to move abroad, created an infographic to demonstrate the second languages of countries around the world. Europe The countries which once belonged to the former Soviet Union – Estonia, Latvia, Lithuania and Ukraine – still hold Russian as their second language. Romania, Serbia and Slovakia’s collective second language is Hungarian, from their membership in the Austro-Hungarian Empire.

Linguistics Research Digest: "Uh-huh. Mhm. Wow": How Backchannels influence the Story When we hear someone telling a story or narrating an event, it is not uncommon to hear listeners responding with mhm, uh-huh, wow, oh, and the like. At face value, these words or short phrases may not seem to contribute to the conversation. Sure, they indicate attention and agreement, but how much do they actually influence the story being told? In a recent study on such responses, researchers Jackson Tolin and Jean E. Fox Tree argue that these backchannels, as they are called, actually do influence the narrative.

30 Incorrectly Used Words That Can Make You Look Bad While I like to think I know a little about business writing, I often fall into a few word traps. For example, "who" and "whom." I rarely use "whom" when I should. Even when spell check suggests "whom," I think it sounds pretentious. So I don't use it. And I'm sure some people then think, "What a bozo." 1914-1918: How charities helped to win WW1 As the First World War began in the early days of August 1914, a stream of wealthy and well-connected people visited Whitehall and volunteered to put their substantial resources at the disposal of the War Office. Typical among them were Almeric Paget, Conservative MP for Cambridge, and his wife Pauline, who proposed funding a corps of 50 trained volunteer masseuses or "medical rubbers" - the forerunners of today's physiotherapists - to treat injured men. Paget's Massage Corps was established within days and run from his London home.

*****Museum shows migration is 'everyone's' story Image copyright Sir Stephen Sedley From this week London gets a new Migration Museum. It's starting out in a temporary home but the hope is that within a couple of years it will move to a permanent base.