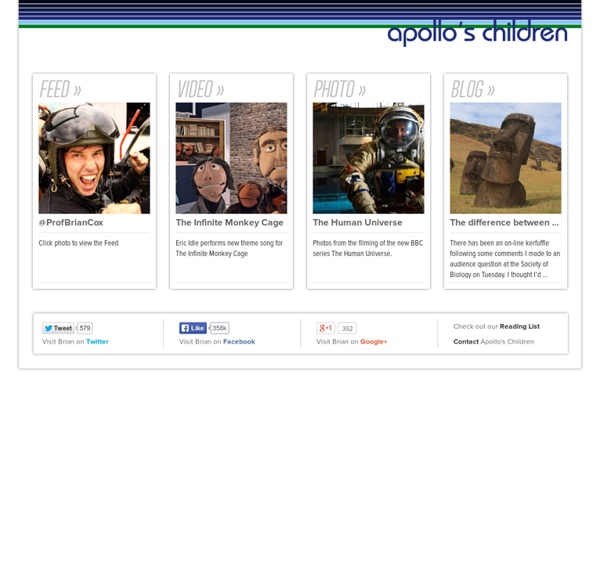 The Official Website Of Joshua P Warren Paranormal Investigator Broadcaster and Author Оптические приборы - От линзы до телескопа - Томск Tue, 07/05/2011 | Co.Design Art Bell | Dark Matter Podcasts and Downloads - The Infinite Monkey Cage What the papers won’t say Let’s try a thought experiment. Let’s imagine that BP threw an extravagant party, with oysters and expensive champagne. Let’s imagine that Britain’s most senior politicians were there — including the Prime Minister and his chief spin doctor. And now let’s imagine that BP was the subject of two separate police investigations, that key BP executives had already been arrested, that further such arrests were likely, and that the chief executive was heavily implicated. Let’s take this mental experiment a stage further: BP’s chief executive had refused to appear before a Commons enquiry, while MPs who sought to call the company to account were claiming to have been threatened. Meanwhile, BP was paying what looked like hush money to silence people it had wronged, thereby preventing embarrassing information entering the public domain. And now let’s stretch probability way beyond breaking point. Instead, until this week there has been almost nothing, save for a lonely campaign by the Guardian.

Earthfiles.com Headline News Brian Cox and Robin Ince: Politicians must not elevate mere opinion over science The story of the past hundred years is one of unparalleled human advances, medically, technologically and intellectually. The foundation for these changes is the scientific method. In every room in your house, there are innovations that in 1912 would have been considered on the cusp of magic. The problem with a hundred years of unabated progress, however, is that its continual nature has made us blasé. We expect immediate hot water, 200 channels of television 24 hours a day, and the ability to speak directly to anyone anywhere in the world any time via an orbiting network of spacecraft. Any less is tantamount to penury. With each new generation, the memory of appallingly high child mortality rates, tuberculosis and vast slums grows fainter and fainter. Against this rather depressing introductory backdrop, however, there are faint glimmers of hope, because science, rational think-ing and evidence-based policy-making are enjoying a revival. Robin Ince is a writer and comedian.