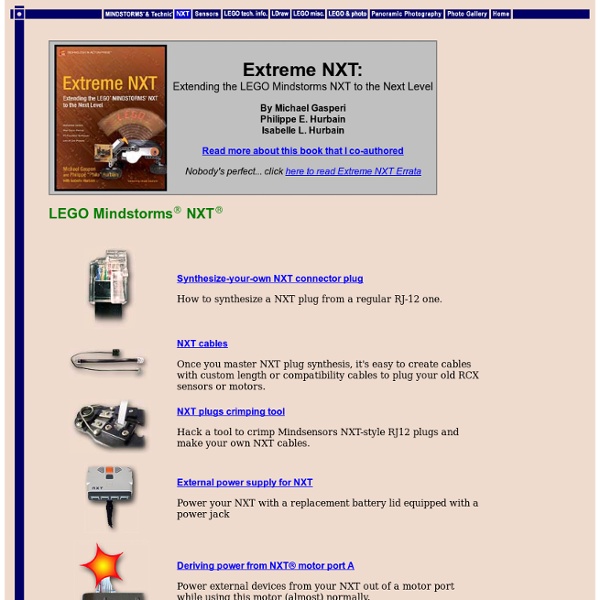 Hacking the LEGO NXT If you are a millionaire and able to buy a LEGO Mindstorms NXT, you may find kind of difficult to hack it or create homemade sensors. I believe you already noticed the particular jack that comes with the NXT. It looks like a telephone jack, but the latch is located in one side, making difficult to connect any other cable. That is not a big problem; filling off the latch from a 6-wires telephone connector (RJ-12) may do the job. Once I was able to connect a telephone cable to the NXT, I started to test the signals. Tutorial: Most Useless Machine EV3R Most Useless LEGO MINDSTORMS Machine EV3 This useless machine is inspired by the “Most Useless Machine EVER” by “SaskView”. Now you can build one too, using the instructions below. All you need is one LEGO MINDSTORMS EV3 kit (#31313).

Article archive Volume Number: 23 (2007) Issue Number: 04 Column Tag: Geek Toys By Rich Warren I admit it. I have had a long-term love/hate affair with the Lego Mindstorm line. Free Lego NXT MindStorms NXT-G Robotics Challenges Tutorials At the request of Tasmanian teachers Miss Clare Neilson and recently retired Mrs. Juanita Airey, activities using Lego's NXT 1 MindStorms Robots have been developed for use in School-based 2-hour sessions. Some, but not all, will work with the new NXT 2 kit (click here for more information). The tutorials are presented as a series of Challenges, which are gradually being converted for Web use. Challenges with an "M" after the challenge number include mentor notes. Challenge numbers greater than 100 use components that are not in the NXT 1.0 Retail or Educational Lego kits, but are available for separate purchase.