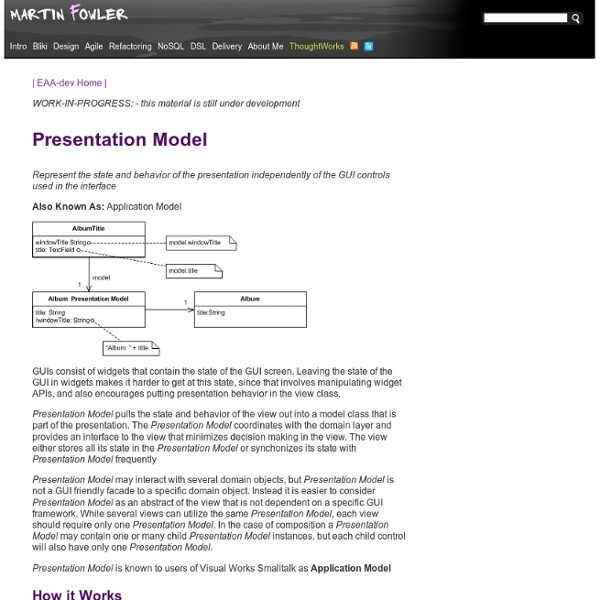 Model View ViewModel MVVM facilitates a clear separation of the development of the graphical user interface (either as markup language or GUI code) from the development of the business logic or back end logic known as the model (also known as the data model to distinguish it from the view model). The view model of MVVM is a value converter[4] meaning that the view model is responsible for exposing the data objects from the model in such a way that those objects are easily managed and consumed. In this respect, the view model is more model than view, and handles most if not all of the view’s display logic (though the demarcation between what functions are handled by which layer is a subject of ongoing discussion[5] and exploration). The view model may also implement a mediator pattern organising access to the backend logic around the set of use cases supported by the view. History[edit] Microsoft MVP Josh Smith reported[6] that A notable Javascript implementation of this pattern is Knockout.js. Timeline[edit]

visionmedia/jade Passive View A screen and components with all application specific behavior extracted into a controller so that the widgets have their state controlled entirely by controller. A perennial problem with building rich client systems is the complication of testing them. Most rich client frameworks were not built with automated testing in mind. Controlling these frameworks programaticly is often very difficult. A Passive View handles this by reducing the behavior of the UI components to the absolute minimum by using a controller that not just handles responses to user events, but also does all the updating of the view. How it Works This pattern is yet another variation on model-view-controller and model-view-presenter. Figure 1: Unlike most MVC-style configurations, Passive View results in no dependencies between view and model. Figure 2: When the actual text is edited, all the UI response is handled by the controller. Figure 3: Classes for the assessment example. When to use it Significant Revisions

Design Patterns Quick Reference So every time I am designing something new I find myself either searching Google or opening up a gang of four (GoF) book to aid me. I searched for a bit trying to find a handy-dandy flash card showing class diagrams and purposes for the basic GoF patterns but was unable to locate a good one (for free). So I made my own.If you see any mistakes or improvements please post here and I will update the docs. If you find this useful, please consider making a donation, even if it is just a few dollars. The ad revenue for this site doesn’t quite cover rent… There are multiple formats you can download in: PDF Cards: Get it! Poster: Get it! Page 1: Page 2: Enjoy!

MVP In Silverlight/WPF Series Nederlandstalig? U woont in Vlaanderen? Bezoek Vlakbij.me en kom in contact met de beste handelaars in je buurt I recently criticized the MVVM pattern which pretty much every Silverlight and WPF developer has probably used by now. And that's why I decided to write this series instead of simply trying to back up my statements with a post that showed some code. These are the posts the series consists of: Welcome to Core J2EE Patterns! Oracle Technology Network > Java Software Downloads View All Downloads Top Downloads New Downloads What's New Java in the Cloud: Rapidly develop and deploy Java business applications in the cloud. Essential Links Developer Spotlight Java EE—the Most Lightweight Enterprise Framework? Blogs Technologies Contact Us About Oracle Cloud Events Top Actions News Key Topics Oracle Integrated Cloud Applications & Platform Services

Design Patterns | Object Oriented Design Using Model View Presenter in WPF - Paul Stovell I have owned a copy of Sams Teach Yourself WPF in 24 Hours for about a year, and I still find it an interesting book. One thing I like about this book is that doesn't just show off WPF features - it shows how to use the Model-View-Presenter pattern in doing so. The book was written by Rob Eisenberg and Christopher Bennage from BlueSpire, who are also the guys behind the Caliburn WPF framework, so they know a thing or two about the Model-View-Presenter pattern. Like the Model-View-ViewModel pattern, we can mostly agree upon what the MVP pattern is, but in practice nearly every implementation looks different. As in the Teach Yourself WPF in 24 Hours book, my sample application is a contact manager. The application has a shell, and a docking panel like Visual Studio. You can download the code to follow along. First let's highlight some differences in terms of approaches to the MVP pattern between the two. View->Presenter Communication Some considerations to keep in mind here are: Is it MVVM?