Why global water shortages pose threat of terror and war 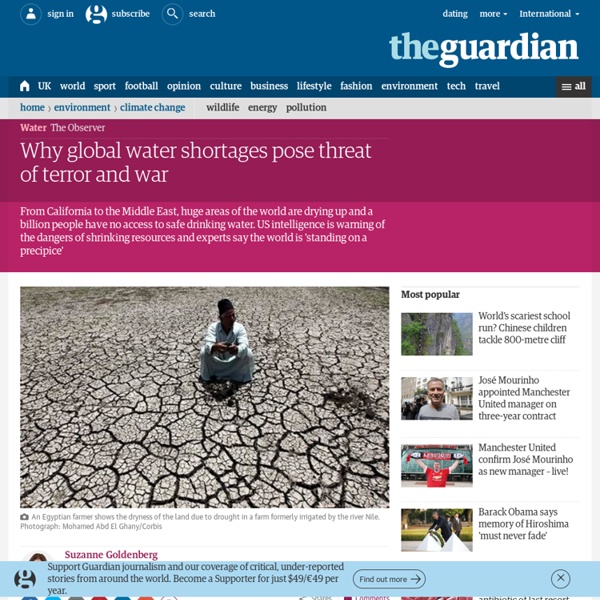 On 17 January, scientists downloaded fresh data from a pair of Nasa satellites and distributed the findings among the small group of researchers who track the world's water reserves. At the University of California, Irvine, hydrologist James Famiglietti looked over the data from the gravity-sensing Grace satellites with a rising sense of dread. The data, released last week, showed California on the verge of an epic drought, with its backup systems of groundwater reserves so run down that the losses could be picked up by satellites orbiting 400km above the Earth's surface. "It was definitely an 'oh my gosh moment'," Famiglietti said. "The groundwater is our strategic reserve. That same day, the state governor, Jerry Brown, declared a drought emergency and appealed to Californians to cut their water use by 20%. Already a billion people, or one in seven people on the planet, lack access to safe drinking water. "Almost all of those red hotspots correspond to major aquifers of the world.

James Lovelock: 'enjoy life while you can: in 20 years global warming will hit the fan' | Environment In 1965 executives at Shell wanted to know what the world would look like in the year 2000. They consulted a range of experts, who speculated about fusion-powered hovercrafts and "all sorts of fanciful technological stuff". When the oil company asked the scientist James Lovelock, he predicted that the main problem in 2000 would be the environment. "It will be worsening then to such an extent that it will seriously affect their business," he said. "And of course," Lovelock says, with a smile 43 years later, "that's almost exactly what's happened." Lovelock has been dispensing predictions from his one-man laboratory in an old mill in Cornwall since the mid-1960s, the consistent accuracy of which have earned him a reputation as one of Britain's most respected - if maverick - independent scientists. For decades, his advocacy of nuclear power appalled fellow environmentalists - but recently increasing numbers of them have come around to his way of thinking. "Not a bit!

Sustainability is destroying the Earth | stories of creative ecology Don’t talk to me about sustainability. You want to question my lifestyle, my impact, my ecological footprint? There is a monster standing over us, with a footprint so large it can trample a whole planet underfoot, without noticing or caring. This monster is Industrial Civilization. I refuse to sustain the monster. What is it we are trying to sustain? Somewhere along the way the environmental movement – based on a desire to protect the Earth, was largely eaten by the sustainability movement – based on a desire to maintain our comfortable lifestyles. The sustainability movement says that our capacity to endure is the responsibility of individuals, who must make lifestyle choices within the existing structures of civilization. Sustainability advocates tell us that reducing our impact, causing less harm to the Earth, is a good thing to do, and we should feel good about our actions. Only one-quarter of all consumption is by individuals. Electricity Water conservation Shorter showers.

Considering Extinction: Are We Falling Off the Climate Precipice? Jamail explores what climate scientists just beyond the mainstream are thinking about how climate change will affect life on this planet. What, in other words, is the worst that we could possibly face in the decades to come? The answer: a nightmare scenario.I grew up planning for my future, wondering which college I would attend, what to study, and later on, where to work, which articles to write, what my next book might be, how to pay a mortgage, and which mountaineering trip I might like to take next. Now, I wonder about the future of our planet. During a recent visit with my eight-year-old niece and 10- and 12-year-old nephews, I stopped myself from asking them what they wanted to do when they grew up, or any of the future-oriented questions I used to ask myself. I did so because the reality of their generation may be that questions like where they will work could be replaced by: Where will they get their fresh water? The route had changed dramatically enough to stun me.

Climate Change 2013: Where We Are Now - Not What You Think The flats on Padre Island National Seashore, Texas, are only inches above sea level. This year, sea level rise could have taken these flats, forever, in time frames that matter.Click here to support news free of corporate influence by donating to Truthout. Help us reach our fundraising goal so we can continue doing this work in 2014! We are in the midst of an era of frightening contradictions, when it comes to public understandings of climate change. While climate changes are occurring more quickly than scientists have ever predicted, most people’s knowledge of these realities remains hazy and clouded by political overtones. In 1976, Wallace Broeker was one of the first to suggest climate change could alter our planet harmfully within our lifetimes. One of his first jobs was under Willard Libby, who was awarded the Nobel Prize in 1949 for discovering carbon-14 dating. There are many other ways that we know for sure. Intergovernmental Panel on Climate Change 2013 A Brave New Proclamation

What bike helmets can teach about climate change — Howie Chong : Howie Chong My previous post on bike helmets seems to have garnered a lot of interest. My little blog went from a handful of visits a day to several hundred visits an hour. According to my web host, my week to week page views are up a projected 62,000%. Someone even linked my post on Reddit. I'm not sure if this counts as going viral (33,000 viewers is far short of millions of viewers), but for some reason my post seems to have struck a chord. Many have found my reasoning to be counter-intuitive. If having a helmet reduces the chance of getting a serious head injury, how can biking without a helmet increase my safety? If we zoom out and look at this problem from a bird's eye view, we'd see this as what economists, sociologists, environmentalists, and political scientists call a collective action problem. This dynamic of individual benefit producing a collective cost was identified in 1968 by Garrett Hardin, a biologist at UC Santa Barbara. You can see the same kinds of dynamics in other problems.

Nuclear Fusion and the Great Global Gamble | A\J – Canada's Environmental Voice Isaac Newton was pondering how to test the hypothesis that colour is created through pressure on the optical nerves when, suddenly, he had an epiphany. With startling confidence ­­– or perhaps simply unnerving indifference – he stuck a needle into the back of his eye. Newton calmly noted the effect it had on his vision. Thus was another scientific advance made by the father of classical mechanics. Newton risked his physical well-being through the needle experiment, but not much else. Today scientists at MIT face a different kind of risk. Nuclear fusion is the poster child of a new permutation of scientific risk: one in which global financial wagers are placed against the probability of success. Clean, cheap and unlimited, nuclear fusion is the reaction that powers stars. Big scientific leaps are now rarely made via small-scale experiments with few resources. In the face of climate change, nuclear fusion is the big gamble. Reputational risk is something Newton knew all about.

The truth about climate change? A recent article by Naomi Klein raises all kinds of disturbing questions. Things are so bad from the perspective of climate change, she claims, that climate scientists are beginning to sound alarm bells. This in itself speaks volumes. Global food production may be adversely affected by climate change and global warming in the near future, raising the specter of geopolitical chaos and genocidal wars over land and access to resources. Such an analysis is frightening for obvious (and not so obvious) reasons. Ultimately, we are dealing with what social psychologists call "cognitive dissonance". In cognitively discordant situations, the organism decide to 1- accept discordant info and reorganize its way of perceiving the world or 2- to actively reject the discordant data.

Geoengineering: Can We Save the Planet by Messing with Nature? Guests Clive Hamilton professor of public ethics at Charles Sturt University in Canberra, Australia. This is viewer supported news Donate As the carbon dioxide in the air hits 400 parts per million for the first time in human history, some are arguing that the best way address climate change is to use the controversial practice of geoengineering — the deliberate altering of the Earth’s ecological and climate systems to counter the effects of global warming. This is a rush transcript. AMY GOODMAN: We turn now to look at the issue of climate change, the growing concern about climate change and what to do about it. Some are arguing the best way to address climate change is to use the controversial practice of geoengineering—the deliberate altering of the Earth to decrease the level of greenhouse gas emissions. DAVID KEITH: This geoengineering idea, in its simplest form, is basically the following. Clive Hamilton, welcome to Democracy Now! CLIVE HAMILTON: Thanks, Amy. CLIVE HAMILTON: I have.

We are deluding ourselves: The apocalypse is coming — and technology can’t save us Last week, Salon ran an article, “Thanks for killing the planet, boomers!,” where I argued that it’s wholly unrealistic to assume humanity will undertake the massive, world-changing, economy-disrupting policy solutions needed for us to even stand a chance of long-term survival. Given that our local political and economic systems are as fragile, stalled and polarized as they’ve been in most of American history, these predictions only seem more dire, and the problem only more intractable. Which is why I’m constantly amazed by the notion that our technology will somehow save us, what I’ve come to consider the deus ex machina defense. I’ve never considered myself much of an “environmentalist”: Growing up in Boston, I’d often playfully argue with friends in favor of littering. Still, I was always receptive to the idea of global warming: I’m no climatologist, but serious scientists with academic and professional bona fides have been voicing their extreme, sober concerns for my entire life.