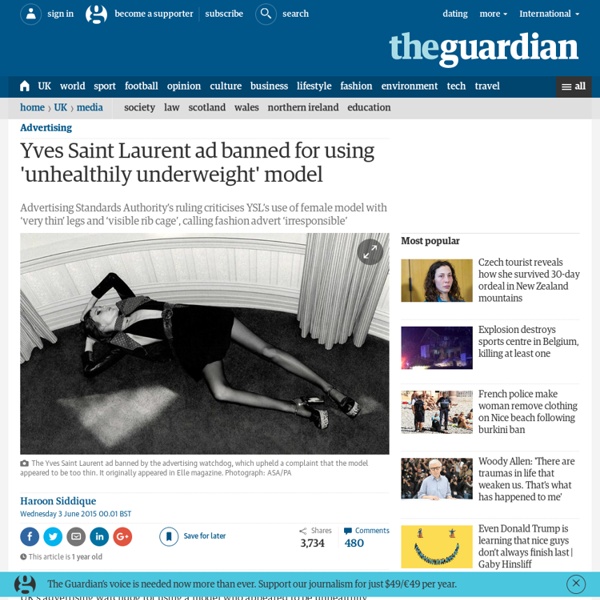 An advert by the fashion company Yves Saint Laurent has been banned by the UK’s advertising watchdog for using a model who appeared to be unhealthily underweight. Upholding a complaint that the model looked too thin, the Advertising Standards Authority (ASA) censured the advert, which appeared in Elle magazine, as irresponsible. In its ruling, published on Wednesday, it said: “The ASA considered that the model’s pose and the particular lighting effect in the ad drew particular focus to the model’s chest, where her rib cage was visible and appeared prominent, and to her legs, where her thighs and knees appeared a similar width, and which looked very thin, particularly in light of her positioning and the contrast between the narrowness of her legs and her platform shoes. “We therefore considered that the model appeared unhealthily underweight in the image and concluded that the ad was irresponsible.” YSL and Elle declined to comment on the ruling.

ASAP Rocky is the New Face of Dior I Highsnobiety It’s an accepted fact that A$AP Rocky is among the most (if not the most) fashionable men in hip-hop. His personal aesthetic is proof enough, but lately A$AP has embedded himself further and further into the fashion industry, most recently with the unveiling of his collection with acclaimed designer J.W.Anderson. But lest we forget, the man’s a model too, as he has just been announced as one of the faces for Dior’s FW16 campaign. Rocky is one of four creatives highlighted for Dior’s latest campaign, the others being film director Larry Clark of Kids fame, actor Rod Paradot and model Dylan Roques. Stay tuned for further information regarding Dior’s FW16 collection. In case you missed it, here’s Rihanna’s incredibly clever collaboration with the fabled French house.

Luxury brands get tougher with counterfeiters — and Alibaba Shutterstock/Everett Collection Luxury brands are getting more aggressive about taking suspected counterfeiters to court. After years of debate in the luxury industry about how to publicly tackle counterfeit goods, a growing number of high-end names from Gucci to Moncler and Alexander Wang are suing sellers of fakes, both in China and the West. The legal action comes as brands grapple with an explosion of fake goods on e-commerce and social-media platforms. Fashion brand Alexander Wang, which sued the owners of 459 websites believed to be selling counterfeit handbags, footwear and clothing last year, won a $90 million judgement this month in a New York district court. The court froze the websites and transferred their domain names — many of which are believed to originate in China — to the designer. It can be hard to find out who is selling the counterfeit goods, and therefore who to sue, so the brands sometimes hire investigators and lawyers. A version of this article appeared on wsj.com.

Luxury Brands Focus On “Instagram Generation” Ultra Rich Customers It’s a brave new world out there, though not the one Aldus Huxley envisioned. Technology is all-pervading in more ways than we actually realize. While browsing the web you always come across headlines with celebs touting the latest and greatest. Whether it’s a reality star, a Hollywood A-lister or a singer, everyone knows what they’re doing, where they are, what they’re wearing – oh, and what they are driving. The paparazzi will soon be a thing of the past. To automotive company executives, it sounds like a golden opportunity. Give them what they want, that’s the answer. Everyone is getting on the game. Of course they do; the restrained options remind them of their parents’ or grandparents’ cars. A chrome Bentley or Rolls may cause loyal customers a heart attack, but in the end it’s only business. Eric Lawrence, director of specialty products for Black Book, oversees publication of its Collectible Vehicle Value Guide. He calls it “The Instagram Effect”. Story Reference: Autonews

Christian Louboutin: The World’s Most Fabulous Shoes, Channel 4 - TV review - Reviews - TV & Radio - The Independent These objects of desire are not designed with commerce or comfort in mind, but they are supposed to make the wearer happy. Louboutin revealed that a picture of Princess Diana looking sadly at her feet was the inspiration for the very first pair of shoes he designed under his own name. “It would be nice to have something to make her smile, when she looked at her feet.” Luckily, you didn’t have to be overawed by Louboutin’s creative process to find this year-in-the-life snapshot amusing. Toast of London’s Tracy-Ann Oberman delivered the need-to-know info in a voiceover as arch as the angle of those famous red soles: he goes everywhere on a Vespa accompanied by Safquat, his Bangladeshi butler. Not that Louboutin’s customers are complaining.