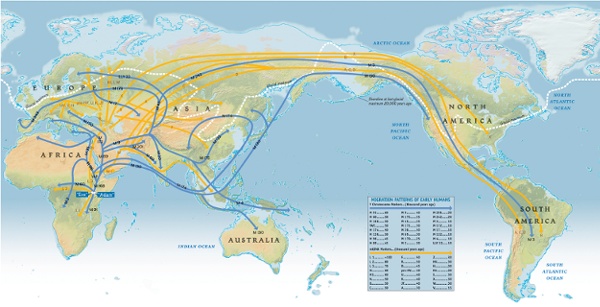 Historical Maps home page Down to: 6th to 15th Centuries | 16th and 19th Centuries | 1901 to World War Two | 1946 to 21st Century The Ancient World ... index of places Aegean Region, to 300 BCE Blow to multiple human species idea 17 October 2013Last updated at 14:03 ET By Melissa Hogenboom Science reporter, BBC News The 1.8 million-year-old skull is the most complete hominid skull ever found The idea that there were several different human species walking the Earth two million years ago has been dealt a blow. Segmenting the Tourism Market by Paul Williams Nov 2008 Browse this article:

The invasion of Australia - official at last The invasion of Australia - official at last 1 July 2011 The City of Sydney has voted to replace the words “European arrival” in the official record with “invasion”. The deputy lord mayor, Marcelle Hoff, says it is intellectually dishonest to use any other word in describing how Aboriginal Australia was dispossessed by the British. “We were invaded,” said Paul Morris, an Aboriginal adviser to the council. Animated Historical Maps The first Christian communities (1st century) This map is part of a series of 17 animated maps showing History of Christianity. 4 are currently available online Independence for India and Pakistan Clement Attlee, the Labour Prime Minister who replaced Winston Churchill in July 1945, soon realised that independence for India was inevitable, but disagreements among the Indian politicians made the negotiations very difficult.

New human species identified from Kenya fossils 8 August 2012Last updated at 13:06 ET By Pallab Ghosh Science correspondent, BBC News A new species of human: One of several co-existing in Africa two million years ago Researchers studying fossils from northern Kenya have identified a new species of human that lived two million years ago. The discoveries suggests that at least three distinct species of humans co-existed in Africa. Zen and the Art of Divebombing, or The Dark Side of the Tao I felt a great disturbance in the Force, as if millions of voices suddenly cried out in terror, and were suddenly silenced. I fear something terrible has happened. Alec Guiness, as Obi-Wan Kenobi, Star Wars, 1977

Page Title Entering Coolgardie. There's a row of houses that look like they have been literally carried up from Perth and placed in a row. The were built for miners and their families. My parents rented one in the middle. Wind Map An invisible, ancient source of energy surrounds us—energy that powered the first explorations of the world, and that may be a key to the future. This map shows you the delicate tracery of wind flowing over the US. The wind map is a personal art project, not associated with any company.

Skull of Homo erectus throws story of human evolution into disarray The spectacular fossilised skull of an ancient human ancestor that died nearly two million years ago has forced scientists to rethink the story of early human evolution. Anthropologists unearthed the skull at a site in Dmanisi, a small town in southern Georgia, where other remains of human ancestors, simple stone tools and long-extinct animals have been dated to 1.8m years old. Experts believe the skull is one of the most important fossil finds to date, but it has proved as controversial as it is stunning.

Why anthropologists should become journalists We need courses and programs in “Anthropology & Journalism” to help create the critical public intellectuals of the 21st century, Brian McKenna writes in Counterpunch. Such programs will help equip students with skills to popularize critical knowledge: One thing is certain. We need a new wave of writers and journalists, unafraid to do the most radical thing imaginable: simply describe reality. Their ranks will largely come from freethinkers, dissenting academics and bored mainstream journalists who rediscover what got them interested in anthropology in the first place, telling the truth. Anthropologists have no choice.

Images of the social and economic world Here is an ordinary map of the world: Click on image for a larger version Roughly speaking, on a map like this, the sizes of the countries of the world are in proportion to their actual sizes on the surface of the planet and their shapes are the same as their actual shapes. (This is only approximate though, since some distortion is inevitable when you go from a spherical planet to a flat map.) Is this the stomach-turning truth about what the Neanderthals ate? It was the tell-tale tartar on the teeth that told the truth. Or at least, that is what it appeared to do. Researchers – after studying calcified plaque on Neanderthal fossil teeth found in El Sidrón cave in Spain – last year concluded that members of this extinct human species cooked vegetables and consumed bitter-tasting medicinal plants such as chamomile and yarrow. These were not brainless carnivores, in other words.

Salary and Career Info for a Sociology PhD Degree Sociology is the study of human behavior as it relates to the basics of human interaction within the guidelines and norms of a society or culture. Doctoral-level sociology programs place heavy emphasis on the study of advanced sociological theory and on the practice of research-based applications and statistical analysis. Graduates of doctoral degree programs can pursue many careers, including positions as college professors, sociologists and political scientists. College Professor A professor of sociology in a collegiate setting requires a doctoral degree, and he or she may instruct undergraduate or graduate students. Like many other teaching positions, sociology professors create lesson plans, present class material to students and perform academic evaluations.