Wikkelhouse - A HOUSE FOR YOU 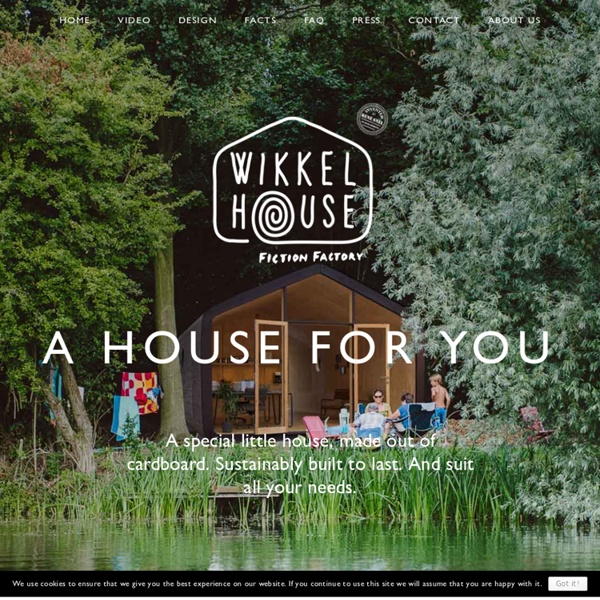 Raumhochrosen's woodland cabin in Austria provides respite for life coach Austrian architecture studio Raumhochrosen designed this compact timber cabin as a wilderness retreat for a life coach and songwriter. Tom's Hut is located in a patch of woodland in Austria's Wienerwald municipality, where it provides its owner respite from his busy urban life. Raumhochrosen prefabricated the angular, timber structure offsite before slotting it into its sloping, tree-covered plot. "If a mental coach is also an Austrian songwriter, living his life between extremes, he needs a woodland wilderness hut as a balance to his life in the middle of the town," said the architects. "This simple house refers intensively to its environment, follows the contour of a previous, decaying building and was really drafted around a man and his passions." Vertical lengths of timber clad the walls of the hut, while metal sheeting covers its mono-pitched roof and chimney.

10 Modern Prefabs We'd Love To Call Home posted Categories: Homes / Dwellings Over the years, the prefab movement has been gradually gathering steam as a great option for a new home. Built in much less time than a traditionally-built home, prefabs offer great, modern digs in smartly designed, often compact, packages. Let’s take a look at ten of our favorites. m2 is a custom prefab designed by Balance Associates Architects, which is made up of 2 Medium modules from their S-M-L series. The cabin-like retreat focuses on the wooded view.

Kombinat designs kitchen-style workplace for Vienna apartment This Vienna apartment, renovated by Slovenian architects Kombinat, features a hybrid living space with room for both cooking and working. The firm demolished a partition wall to create the space in the 96-square-metre apartment, which overlooks a street in the Austrian capital. To enable this area to serve as a kitchen, office and meeting place, Kombinat installed a long counter that functions as a dining table but also a workstation when required. Wooden storage adjacent to the front window forms both a kitchen counter and a place for readers to perch. "This is the place to cook, eat, read and write, but first and foremost, it is a place to gather and meet," said the studio, which previously converted an Alpine chalet into a house with timber shutters like a sliding puzzle.

Impressive 380 sq. ft. tiny home has extra-tall bedroom built over gooseneck trailer (Video) Smaller homes run a whole gamut of creativity: from hand-built earthen geodesic domes to the current plethora of interesting tiny homes that are emerging beyond the early Tumbleweed days. Nelson Tiny Houses, a builder based in British Columbia, created this impressive 380-square-foot dwelling using a fifth-wheel utility trailer as a base. The resulting design boasts a great layout: a comfortable sitting area, guest loft and a loft-less bedroom that feels like a room in its own right. Seth Reidy of Nelson Tiny Houses gives a tour of this home, now nestled in the mountains somewhere:

Tiny Houses From MUJI - TINY HOUSE TOWN If you're a fan of the Japanese retailer MUJI, get ready for an exciting addition to the company's list of products- tiny houses! Starting in 2017, the company will begin selling pre-fab tiny homes. Called "MUJI HUT", the homes were done in collaboration with designers Naoto Fukaswaka, Jasper Morrison, and Konstantin Grcic, who each produced their own hut. The home-, named Wooden Hut, Cork Hut, and Aluminum Hut- each have their own unique features. The Wooden Hut features a loft space for sleeping, while the other two are single level.

Welcome To "Bestie Row": Lifelong Friends Build Row Of Tiny Houses In The Middle Of Nowhere. Some friendships last forever. You hear of lifelong friends often living in the same towns just so they can socialize whenever they wish, be a part of each other’s family lives, and finally grow to be the grey-haired besties who rock on the porch and talk about the “good ol’ days”. Four couples who had been best friends for 20 years decided they were going to trump living in the same town. No way were they going to let the business of life keep them from enjoying that special connection that they’d grown to love. A Little Design creates 22m2 apartment in Taiwan Taiwanese studio A Little Design has renovated a 22-metre-square micro apartment to serve every need of its occupant (+ slideshow). A bath, floor-to-ceiling storage and space for exercise are included in the compact flat, located in Taipei City, where property prices are driving young buyers into smaller homes. A Little Design described the client as a young woman who travels frequently for work, and when she gets home "all she needs is a hot bath and a good sleep".

Willem Dudok: Meet the Father of Dutch Modernism Willem Marinus Dudok (6 July 1884 - 6 July 1974) was one of The Netherlands' most influential Modernist architects. Formally trained as an engineer, Dudok spent his formative years designing military barracks for the Dutch forces, and his time with the military has been credited with the development of his early linear style, though he was known to borrow elements from Frank Lloyd Wright's prairie school of architecture. Dudok's architectural legacy is undeniable: with a career spanning several decades, his portfolio encompasses nearly all civic buildings in Hilversum, along with a series of projects in Rotterdam, Utrecht, and Paris, among others.

Constructing a Dream World out of Ordinary Architecture Welcome to a world governed by line, form, and color. Enter one of Serge Najjar’s square frames and end up in an isolated dreamscape—high above the ground, outside of time, and punctuated by the suspended motion of a stranger. I stumbled into this world myself through the Instagram rabbit hole and have been curious about these images ever since. Extending Window Extending Window November 2nd, 2015 | Tech | Innovative window designed by Aldana Ferrer Garcia allows people to lean over the edge and look at the sky. VULCAN: the world's largest 3D-printed architectural pavilion oct 07, 2015 VULCAN: the world's largest 3D-printed architectural pavilion VULCAN, the world’s largest 3D-printed architectural pavilion, opens at BJDW 2015image by laboratory for creative design beijing design week 2015 makes history with the reveal of VULCAN, the world’s largest 3D-printed architectural pavilion. within the central atrium of the high-tech commercial/office complex of parkview green, the guinness world record award winning design spans overhead visitors in an arched configuration. laboratory for creative design (LCD) has developed a radical way of using the technology with the support of novel design techniques and construction methods applied on an architectural scale. top view of the pavilion from the second level of parkview greenimage by laboratory for creative design detail of the geometric units that make up the design of the pavilion image by laboratory for creative design

20 of the World's Best Building Images Shortlisted for Arcaid Awards 2015 Arcaid has shortlisted 20 of the year's best architectural images for their 2015 awards - the annual Arcaid Images Architectural Photography Awards. The images will be presented in four categories - Exteriors, Interiors, Sense of Place, and Building in Use - and judged by an esteemed panel on their atmospheric quality, composition, use of scale and more. The winners will be considered for the Photographer of the Year Award, won last year by Hufton + Crow who now serves as a judge. The photographs will be showcased at World Architecture Festival 4-6 November at Marina Bay Sands, Singapore, where the overall winner will be announced. All 20 images include: