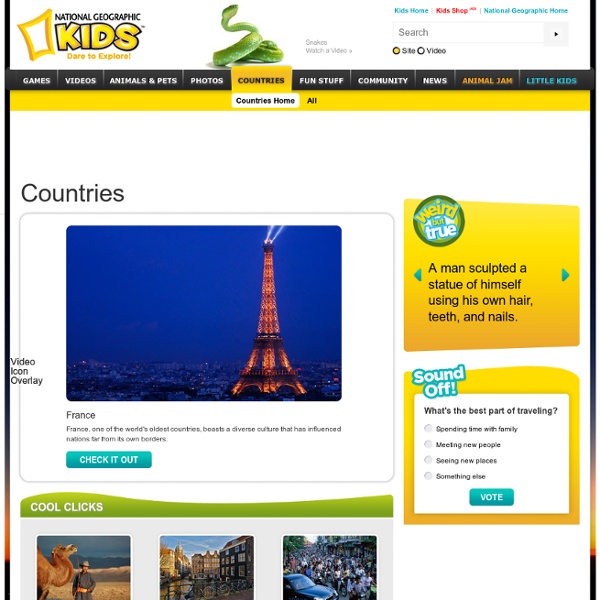 Pictorial Facts of the Day Online Calendar January 2012 Jan | Feb | Mar | Apr | May | Jun | Jul | Aug | Sept | Oct | Nov | Dec Follow projectbritain on Twitter | :Follow Mandy Barrow on Twitter © Copyright Mandy Barrow 2013 Mandy is the creator of the Woodlands Resources section of the Woodlands Junior website. The two websites projectbritain.com and primaryhomeworkhelp.co.uk are the new homes for the Woodlands Resources. “My Place in the World” Project This is an easy kids geography project that helps teach how we- and our community- fit into the wider world. Gather your art supplies and let’s get started. This post contains affiliate links. Thank you for your support! This project is fun to pair with the book “Me on the Map Kids Geography Project:

A mixtape love letter to the parks that birthed hip hop Hip hop was born in an apartment building in the Bronx, but it grew up in New York City’s parks. In the 1970s and ’80s, DJs would steal electricity from street lamps to power their speakers, plug in two turntables and a microphone, and throw a jam. Amateur rappers gathered for freestyle sessions in parks, most famously Manhattan’s Union Square. The essence of living in a dense urban area is trading private space for public space.

Exploring Nature Educational Resource When you think of deserts, do you think of a dry, hot endless sea of sand, with no life? It is true that deserts are dry, and during the day it can be 100 degrees. Sometimes the ground can be too hot to walk on, even with shoes. At midday the scorching sunburns over head making a shimmer of heat rise from the rocks and sand. But at night the desert can be cold! The temperature can drop well below freezing. Tales from an Elementary Classroom If you don’t ask the right questions, every answer seems wrong. - Ani DiFranco There are no stupid questions. But, there are definitely some questions that are better than others. Nelson Mandela Biography - Birthday, Facts, Life Story, Quotes, Timeline, Video Nelson Mandela became the first black president of South Africa in 1994, serving until 1999. A symbol of global peacemaking, he won the Nobel Peace Prize in 1993. Synopsis Nelson Mandela was born on July 18, 1918, in Mvezo, Transkei, South Africa.

Mandela memorial sign language interpreter 'was making it up' The translation of speeches into sign language at Nelson Mandela's memorial service was seen as a sign of inclusiveness, but it appears the sign language interpreter was a fake, according to several expert organisations. Braam Jordaan, a deaf South African and board member of the World Deaf Federation, said the interpreter was making up signs as he went along. "The structure of his hand, facial expressions and the body movements did not follow what the speaker was saying," Jordaan said. The man who signed for a section of the ceremony, including Barack Obama's speech, was simply making up his own signs, he said. "I was really upset and humiliated," Jordaan told the SBS news website.

28 of history's most fascinating photos The Statue of Liberty surrounded by scaffolding as workers complete the final stages in Paris. Circa 1885. An Royal Air Force pilot getting a haircut during a break between missions, Britain, 1942 Bob Marley on the beach with Miss World 1976 Cindy Breakspeare, mother of Damien Marley. Ethnomusicologist Frances Densmore recording the music of a Blackfoot chief onto a phonograph, 1916. Cromoart photoshop tutuorials In this category we want to give you an advice to other great sites, where you can get a lot of very useful information, inspirations and materials. Here I collected 10 great Photoshop tutorials, which can help you to expand your skills. Create a Devastating Tidal Wave in Photoshop Create Quick Particle Effect on Photo via Custom Brush Options in Photoshop Create a Surreal Upside Down Mountain Painting in Photoshop

Maps That Help You Understand The World 1. This map shows the world divided into 7 sections (each with a distinct color) with each section containing 1 billion people. 2. This map shows (in white) where 98 percent of Australia’s population lives. 3. It may not come as a surprise but more people live inside the circle than outside of it. Google Expands Underwater Street View To New Locations Google today added a couple of new locations to its underwater Street View imagery collection, including a number spots around Monaco, Cancun and Isla Mujeres. Google unveiled underwater Street View back in 2012 and has been expanding it (very) slowly ever since. The company has partnered with the Catalin Seaview Survey on this project and uses a number of special underwater cameras to capture the panoramic images its uses for this project.

Séries d'exercices - Astuces pour apprendre Jump to navigation Formulaire de recherche recherche avancée Conseils pour mieux apprendre Voir tous nos trucs et astuces Séries d'exercices - Astuces pour apprendre How many days old are you? Your Age in Days Please enter your birth date or try a random one.LanguagesBETA: Deutsch, English, Français About This page tells you how many days old you are and on which day you were born. Watch the world's ships sail Earth's oceans in REAL TIME: Interactive map reveals crowded routes taken by planet's vessels Marine Traffic map lets anyone trace a vessel that has a position ‘transponder’ similar to those used by aircraftTransponder broadcasts the ships’ position, name, course and speed allowing other vessels to avoid collisionsVessel tracks are coloured according to type and users can zoom in to see which ships are moving in that areaClicking on a placemark allows users to find picture of the ship as well as its speed, vessel type and destination By Ellie Zolfagharifard Published: 11:16 GMT, 22 May 2014 | Updated: 14:29 GMT, 22 May 2014 All over the world, majestic shipping vessels are navigating through vast oceans as they bring their valuable cargoes to port. While their routes may seem far-flung, anyone can track their progress in real-time from the comfort of their desk using this addictive interactive map. Developed by a group of global academics, the Marine Traffic map lets users trace a shipping vessel with a position ‘transponder’ similar to those used by aircraft.