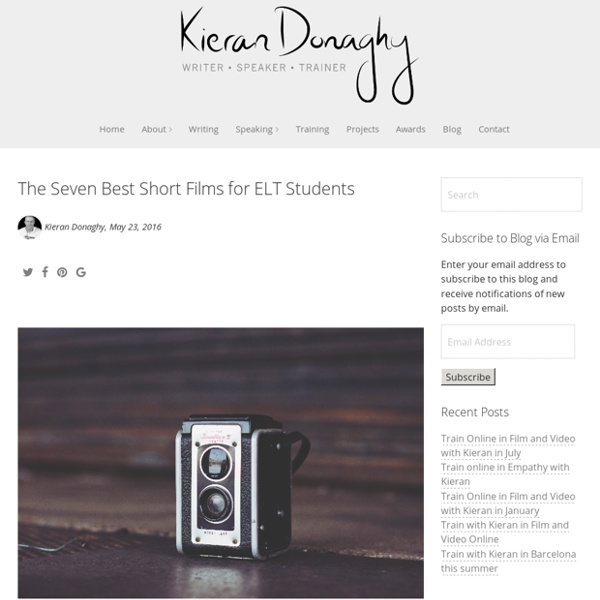 I’ve been writing lesson plans designed around short films for my website Film English for six years. Teachers often ask me how I find the short films I use in my lesson plans. The answer is quite simple: I’ve watched literally thousands of short films and developed an instinct for the type of engaging and simple short films which will work in the ELT classroom. In this article I’d like to share what for me are the seven best short films for the language classroom. The Mirror The Mirror is a short film by Ramon and Pedro which tells the story of a boy’s journey from childhood to old age. The Notebook The notebook is a moving short film by Greg Gray and is wonderful for introducing the theme of empathy. The Present The Present is a gripping short film with a wonderful twist by Jacob Frey which deals with the themes of empathy, teenagers and disability. Soar Soar is a delightful short film by Alyce Tzue which can be used to get students to predict and write a narrative. I Forgot My Phone

The Boy Who Learned To Fly This ELT lesson plan is designed around the theme of the Olympic Games and a short film based on the life of Usain Bolt film created by Moonbot Studios and commissioned by Gatorade. In the lesson students speak about sports and the Olympic games, watch a short film, retell a story and write a summary of a story. I would ask all teachers who use Film English to consider buying my book Film in Action as the royalties which I receive from sales help to keep the website completely free. Language level: Intermediate (B1) – Upper Intermediate (B2) An ESL Reading lesson plan template I Had No Idea, too I’m always surprised when I get reader questions or talk to people preparing for their upcoming ESL job interviews that they don’t know how to make a basic lesson plan. But, it’s not so crazy I guess and I actually had no system of any sort until I took the CELTA course a few years back.

The Seven Best Film and Video Resource Sites - Kieran Donaghy As part of the launch of the website I’m organising a prize draw for my new book Film in Action. Everybody who subscribes to the website in February and March will be entered into the draw. This is the first in a series of posts in which I will look at what I think are some of the best websites, resources, books, short films, and videos for English language teachers and their students. All of the posts will be titled ‘The Seven Best …‘ There is now a wealth of online video and film resources for both language teachers and their students. Here I’m going to recommend the seven sites that I have found most useful and engaging.

The Present This ELT lesson plan is designed around a moving short film by Jacob Frey titled The Present and the theme of teenagers. Students practice adjectives related to character and teenagers, watch the start of a short films, write a narrative and discuss the film. Language level: Pre-intermediate (A2) –Intermediate (B1) Learner type: All ages Free Bingo Board Maker, bingo board templates with images or text, customizable bingo boards to print for preschool, kindergarten teachers, elementary school teachers and language teachers to make resources for lessons, lesson plans and K-6 printable materials for classes. The 3x3 bingo board maker and 4x4 bingo board generators are a bingo game makers that allows you to create bingo boards for vocabulary practice using images. You can select the image you want to use and type in any text you'd like. So, you can choose from 1,000s of images to create the perfect bingo game board. It's super simple, easy to use, but very powerful. You can make up to 16 bingo boards per sheet. 4 boards will print on one sheet of paper for the 3x3 boards. 2 boards will print on one sheet of paper for the 4x4 boards.

The Other Pair This ELT lesson plan is designed around a short film by Sarah Zorik titled The Other Pair and the themes of altruism and empathy. Students watch a short film, write a story, and speak about a story. I would ask all teachers who use Film English to consider buying my book Film in Action as the royalties which I receive from sales help to keep the website completely free. Language level: Pre-intermediate (A2) –Intermediate (B1) Learner type: All ages

Nik's QuickShout: Create Vocabulary Activities from Authentic Text in Minutes Pages Friday, 11 August 2017 Create Vocabulary Activities from Authentic Text in Minutes WordBooster is a real time saver for anyone creating courses using authentic materials. The site generates word lists and vocabulary quizzes from authentic texts and includes definitions of the words and a range of activities to help students understand and remember the words. 10 Modern-Day Heroes Actively Changing The World Miscellaneous As children we all had our favorite superheroes. We loved them, worshipped them, pretended to be them, dressed like them and even talked like them. Now that we’re adults, we are all too well aware that heroes are in high demand but can rarely be found.

Oliver Twist (ESL/EFL Version) by Qiliang Feng This book is Volume III-1 of the series of readers of Million-Word Reading Project (MWRP). It is suitable for readers with a basic vocabulary of 1,500 words.Million-Word Reading Project (MWRP) is a project in which ESL/EFL learners at elementary level (with a basic vocabulary of 1,500 words) are expected to read one million words within two or three years, and reach upper-intermediate level (with a vocabulary of about 3,500 words). This project contains about 40 simplified readers, enough for an ESL/EFL learner to read for two years, and this list is growing.[Text Information]Readability || 87.8Total word count || 25613Words beyond 1500 || 952Headwords beyond 1500 || 340Unknown word percentage (%) || 3.72Unknown headword percentage (%) || 1.33Unknown headword occurrence || 2.8Unknown words that occur 5 times or more || 40Unknown words that occur 2 times or more || 169[Synopsis]The story is set in England in the 19th century.

The Ultimate YA Bookshelf YALSA's Ultimate Teen Bookshelf (PDF) highlights must-have teen materials for libraries. The Ultimate Teen Bookshelf, with titles listed on this webpage and as a PDF download, was developed in conjunction with the United We Serve initiative. The list includes 50 books, five magazines and five audio books. Subscribers to the YALSA-BK electronic discussion list suggested titles for the Ultimate Teen Bookshelf, which were vetted by Pam Spencer Holley, former YALSA president and author of Quick and Popular Reads for Teens (ALA Editions, 2009), and Judy Sasges, district manager for Sno-Isle Libraries in Marysville, Wash., a 2002 Printz Award committee member and a 2010 YALSA Nonfiction Award committee member. Librarians can use this collection to ensure they have quality materials to attract teens; parents and teens can use it to find interesting books and materials to keep reading skills sharp between school years. Download the full list (PDF)!

Lost Property by Åsa Lucander Ever since I saw the opening sequence of Pixar’s Up (you know the part I’m talking about), it seems like I’ve noticed a shift in animation—less hijinks, more sentimentality. The cynic in me wants to reject this trend—it feels like so many animators (especially those hoping to work for Disney’s animated behemoth) are crafting shorts that are aren’t just aiming for your heartstrings, but are figuratively trying to rip them out of your chest. It can all come across as a bit manipulative—feeling sad for the sake of feeling sad. But, occasionally, a short comes my way that manages to warm my cold, black heart. Lost Property from director Åsa Lucander is such a film.

Nik's QuickShout: Make Your Worksheets Digital in Minutes Pages Wednesday, 16 August 2017 Make Your Worksheets Digital in Minutes Telegra.ph is a simple to use tool that can enable you to turn your Word worksheets into online multimedia documents in just a few moments. Go to the site and add a title, your name and the text of your worksheet. Tragic Consequences of Bullying in School Authorities say a planned massacre at a New Bedford, Mass., high school could have been another Columbine — or perhaps even worse — if police hadn't gotten wind of a group of students' alleged plot to detonate explosives, shoot classmates, and then kill themselves. The students have pleaded not guilty, but according to police reports, the five teens who allegedly planned the attack had complained of being picked on and called names. A note found by a janitor at the school spoke of "getting everyone back for calling us names and beating us with ugly sticks."

Six Blind Men and the Elephant In The Blind Men and the Elephant, by American poet John Godfrey Saxe (1816-1887), six blind men meet an elephant for the first time and each man touches a different part of the elephant and makes predictions about what the elephant is like. The sequence and activities suggested below could be spread over two or three lessons depending on the amount of detail you wish to go into. Begin and end each subsequent lesson with a retelling of the story. Aims To learn elephant and story-related vocabularyTo listen and respond to instructionsTo learn adjectives to describe objectsTo listen and understand the general meaning of a story and make predictionsTo learn an elephant rhyme to practise rhythm and rhymeTo help children understand the importance of using all evidence and listening to other people before coming to a conclusionTo ask simple yes/no questions using adjectives