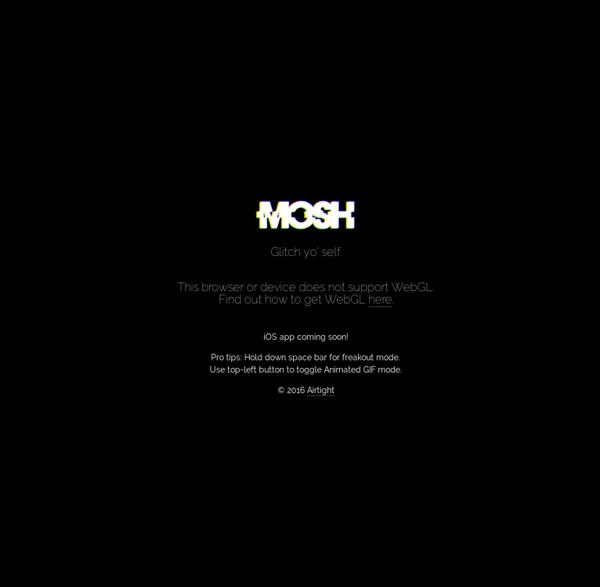 Typatone PICTOMAT – Passport photos like those days in the photo booth. lab Sticky Thing Touch Sticky Thing iPhone Experiments Space Noodles Liquid Particles 3D The particles trapped in a wormhole discoball. Takes some practice to control. Launch06-2010 Comparison Technical study, comparing rendering performance. Overview04-2010 Liquid Particles Hello, Just a quick note, since you seem to be using a mobile device: Not all projects here are actually optimised for mobiles. SpaceLamb Play - Create / We are all made of stars Project: We are all made of stars WebGL demo using HTML5 and webcam. Note this piece requires a modern browser that supports native webcam access, such as Chrome or Firefox, and WebGL. This is a piece that I've wanted to do in WebGL for a long time. Over the last 18 months I have done a lot of work with hardware accelerated 3D but mostly in Adobe's Stage3D. In the process I became aware of the very subtle differences between them. (It requires texture sampling in the vertex shader - not just the fragment shader) I knocked this up over the past week, and given that it is almost fireworks-night (November 5th) here in the UK, I thought it an apt time to post it. I would imagine this piece would look fantastic projected in a large format, so if any of my museum/gallery friends fancy it, let me know... I have left the source un-minified, so if you are interested you can see exactly how it works. See www.brown-and-son.com for up-to-date news and comment on digital art and design.

Typography Ireland Face Forward is an international peer-reviewed conference focused on typography that seeks to examine design and typographic practice, and to make explicit existing connections between craft, research, theory, history, criticism and pedagogy. This conference aims to provoke informed, rigorous and critical debate on aspects of typographic research and practice that relate to current discourse and contexts. It is the inaugural event in what will become an annual international conference. In the field of visual communication and typographic practice, a great deal of epistemological uncertainty still exists. The conference will provide a forum for research into typographic production, representation, dissemination and use. Suggested themes for papers include (but are not limited to): contemporary thinking about typography; the role and relationship of typography to cultural memory; the materiality of typography; type and language; endangered practice; post-digital typography. Page by BONG.