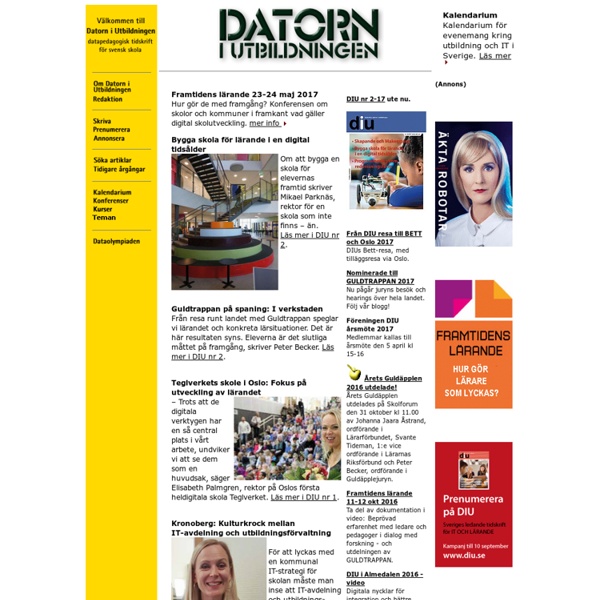 Teaching Kids to Code Every era demands--and rewards--different skills. In different times and different places, we have taught our children to grow vegetables, build a house, forge a sword or blow a delicate glass, bake bread, create a soufflé, write a story or shoot hoops. Now we are teaching them to code. We are teaching them to code, however, not so much as an end in itself but because our world has morphed: so many of the things we once did with elements such as fire and iron, or tools such as pencil and paper, are now wrought in code. We are teaching coding to help our kids craft their future. In this collection we share many different perspectives on coding, from a university professor's vantage point (MIT's Mitch Resnick describes why learning to code is like learning to learn) to an entrepreneur's reflections from his cross-country roadtrip to bring coding--and his stuffed dog--to classrooms across the U.S.

Time to level up the use of ICT in your classroom? Most schools and teachers make the same journey when the move from an analogue classroom to a more digital one. ITL Teacher Survey from 2011 contains a chart (page 20) showing this journey in one picture: Most teachers that are new to using computers in the classroom starts by using Internet as a source of information, using the computer to share content (from teacher to student, the other way around or both ways) and as a substitute for pen and paper, just as is shown in the chart above. There is nothing wrong with using computers this way, but this is not what computers excel at. Todays computers are really, really good at calculating huge amounts of data almost instantly as well as creating simulations, animations and multimedia.

Great ePortfolio Resources for Teachers July 28, 2014 With the massive uptake of web 2.0 technologies, the concept of portfolios has migrated to the cloud giving rise to what is now termed electronic portfolios or ePortfolios for short. An ePortfolio is similar in essence to the traditional pen and paper portfolio but with a set of added advantages. For instance , ePortfolios are accessible anywhere anytime with internet connection. Also ePortfolios allows for a wider inclusion of different multimedia items such as videos, podcasts, audio recordings, slides, text, images and many more. Why Use ePortfolios ? According to Cornell University, there are different learning purposes and benefits behind using ePortfolios. You Need To See This 17-Minute Film Set Entirely On A Teen's Computer Screen These words are probably unfurling inside one of many open tabs on your computer screen. Perhaps one tab is for work, one is for chatting, and another is for Twitter. You probably even have some others open for no particular reason. This is the way we receive information and the way we communicate now: constantly, simultaneously, compulsively, endlessly, and more and more often, solitarily. This strange new mode of living—and its indelible effect on our humanity—is perfectly captured in a new short film that debuted this week at the Toronto International Film Festival. The 17-minute, mildly NSFW Noah is unlike anything you've seen before in a movie—only because it is exactly like what many of us see on our computers all the time.

Creative Computing 7 units44 activitiesremixing encouraged download the guide> help learnerscreate new worldswith computing Code Monster from Crunchzilla <h2>Code Monster gets kids excited about programming. It is a combination of a game and tutorial where kids experiment with learning to code. <p> Code Monster use Javascript. 15+ Ways of Teaching Every Student to Code (Even Without a Computer) According to Code.org, 90 percent of parents in the U.S. want their children to learn computer science—it will be crucial for many jobs in the near future—but only 40 percent of schools teach it. Critics claim that it is mainly the more affluent schools that offer computer science courses, thus denying those who attend poorer schools the chance to learn necessary skills. A focus on STEM is not enough: Code.org also reports that while 70 percent of new STEM jobs are in computing, only 7 percent of STEM graduates are in computer science. It is imperative that savvy schools begin to focus some STEM resources on computer science and programming. In my opinion, parents of every student in every school at every level should demand that all students be taught how to code. They need this skill not because they’ll all go into it as a career—that isn’t realistic—but because it impacts every career in the 21st-century world.

50 Activities To Promote Digital Media Literacy In Students Literacy is changing–not at its core necessarily, but certainly at its edges as it expands to include new kinds of “reading.” Digital media is quickly replacing traditional media forms as those most accessible to most 21st century learners. The impact of this change is extraordinarily broad, but for now we’ll narrow it down to changes in how learners respond to the media they consume. My First Slice of Raspberry Pi - Easy Mono Setup Guide This is a step by step guide to get Mono (Open Source implementation of .Net) running on the Raspberry Pi. All the way from the beginning. You will at least need a Pi, a memory card and a micro USB power supply. This is what I bought: