Jump back In Time 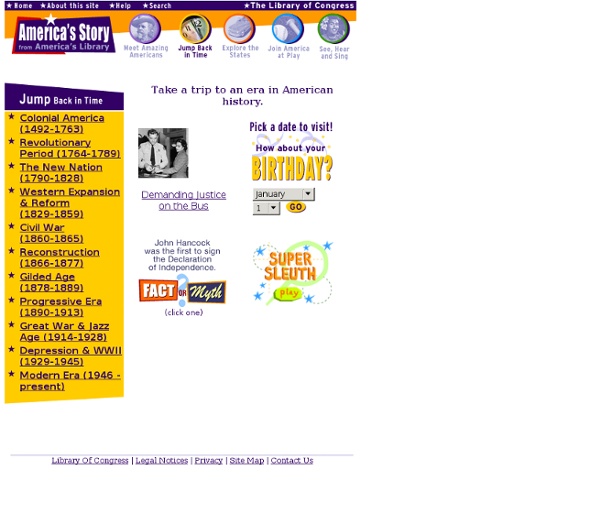 1945 to 21st Century home | 6th-15th centuries | 16-17th centuries | 18-19th centuries | 1901 to World War II Victors, Independence Movements and Cold War The United Nations – the founding, Roosevelt's hopes denied and the veto Victors against the Defeated – retributions, expropriations, occupations The Media and Tokyo Rose – aroused passions against a fictitious enemy Empire headed for Extinction – colonialism in Asia and Africa Cold War: 1945-49 – Stalin, Europe, the U.S. and revolution in China The Korean War – occupation, China intervenes, negotiations Cold War: 1953-60 – communism and the Eisenhower years Cold War: the Kennedy Years – from the Bay of Pigs to assassination Vietnam, 1964-75 – to the war's end, participant opinions and lessons End of the Cold War and the Soviet Union – from Brezhnev to Yeltsin Latin America Latin America Economic Overview, to the 1960s – population growth and underdeveloped resources Brazil from 1945 to the Overthrow of Goulart in 1964 – another military coup but a thriving economy

North Carolina Museum of History homepage Events Calendar > National History Day in North Carolina Saturday, April 26 Students from throughout the state compete at this competition. History Day promotes interest in history among students and to assists teachers in relating history more effectively. Click here to watch the live awards ceremony at 2:45 p.m. For more information about this program, click here. Reader’s Theater: Camp Followers Friday, May 2, 7–9 p.m. $5 per person, ages 13 and up; free, children 12 and under with adult To register, call 919-807-7992. Celebrate Preservation Saturday, May 3, 10 a.m.–4 p.m. Celebration Preservation: Moving Midway Saturday, May 3, 1 p.m. Time for Tots: Start Your Engines Tuesdays, May 6 and 13, 10–10:45 a.m. History à la Carte: “Th’ Bullfrog” Wednesday, May 14, noon–1 p.m. Willard “Th’ Bullfrog” McGhee Many are familiar with the delta and Chicago versions, but the Piedmont blues embody a distinct sound and rhythm and their own set of lyrical themes. >More events

600 Million Years: Melbourne Museum The exhibition brings the story of Victoria’s evolution to life through animation, animatronics, models, fossils and multimedia interactives. Over millions of years Victoria has moved from the tropics to the Antarctic circle and now to the temperate zone. It has been shaped by periods of volcanic activity and major climate shifts. This website provides more information about some of featured exhibits in 600 Million Years: Victoria evolves. 600 Million Years: Victoria evolves is now showing in the Science and Life Gallery at Melbourne Museum. World War II: An Overview It was the bloodiest, deadliest war the world had ever seen. More than 38 million people died, many of them innocent civilians. It also was the most destructive war in history. Fighting raged in many parts of the world. More than 50 nations took part in the war, which changed the world forever. For Americans, World War II had a clear-cut purpose. In Asia and the Pacific, Japanese armies invaded country after country, island after island. What Caused World War II? Most historians believe that the causes of World War II can be traced to World War I (1914-1918). Germany and its allies had been the losers in World War I. A League of Nations was set up after World War I to keep the peace. Then, in the early 1930s, the world was hit by an economic depression. Rise of Dictatorships Germany, Italy, and Japan all came under the rule of dictators or military leaders. Hitler began to arm Germany for war. A World at War Hitler had a plan to conquer Europe. Churchill's words came true. A Changed World

Teacher Guide - George Washington: A National Treasure This Teacher Resource Guide is designed for incorporation into history and social studies curricula. It will introduce your students to some of the events and issues that shaped George Washington’s life. The activities should enhance your students’ knowledge of Washington and expand their horizons about this complex and interesting man. Each activity includes suggested objectives, procedures, related standards in historical thinking, worksheets, and other supplemental materials. The lessons meet United States History Standards for either Era 2, Colonization and Settlement, or Era 3, Revolution and the New Nation. The complete United States History Standards can be found at www.sscnet.ucla.edu/nchs/standards. The FREE education kit, which included the 19 1/4" x 31" full-color museum quality poster reproduction of the “Lansdowne” portrait is no longer available.

Black Soldier to His Enslaved Daughters, and to the Owner of One of the Daughters [Benton Barracks Hospital, St. Louis, Mo. September 3, 1864] My Children I take my pen in hand to rite you A few lines to let you know that I have not forgot you and that I want to see you as bad as ever now my Dear Children I want you to be contented with whatever may be your lots be assured that I will have you if it cost me my life on the 28th of the mounth. 8 hundred White and 8 hundred blacke solders expects to start up the rivore to Glasgow and above there thats to be jeneraled by a jeneral that will give me both of you when they Come I expect to be with, them and expect to get you both in return. [Spotswood Rice] [Spotswood Rice] to My Children, [3 Sept. 1864], enclosed in F. Spotswood Rice Spotswood Rice to Kittey diggs, [3 Sept. 1864], enclosed in F. Published in The Black Military Experience, pp. 689–90, in Free at Last, pp. 480–82, in Families and Freedom, pp. 195–97, and in Freedom's Soldiers, pp. 131–33.

World War 2 for Kids When did World War Two begin? World War Two in Europe began on 3rd September 1939, when the Prime Minister of Britain, Neville Chamberlain, declared war on Germany. It involved many of the world's countries. Why did the Second World War start? The Second World War was started by Germany in an unprovoked attack on Poland. When did World War Two end? The War ended in the Summer of 1945. How did people protect themselves during the war? Children and some women were evacuated from the big cities into the countryside. UNC CGI | Carolina Navigators Carolina Navigators provides K-16 teachers and students with global education resources created by Carolina students who have international expertise. Since its inception in 1996, the program has served over well over 200,000 students in more than half the counties across North Carolina. A program of the Center for Global Initiatives, Carolina Navigators enriches the education of both UNC and K-12 students through engaged learning. This service is free of charge for educators in North Carolina. What can you do with Carolina Navigators? 1. 2. 3. 4. 5.

Amber, I love the interactions from people all over! Great tool! Reel, this project was designed for a class that explores best practices in literacy instruction for elementary students (K-8). All subjects have an element of literacy. by venerika Nov 16

This site includes lots of different eras from the U.S. so I don't know which ones I would pick. I am currently attending classes at Southern Illinois University in IL for Reading and Language Arts-my masters degree, but I am currently teaching 3-5 deparmentalized Social Studies and a 4th grade Science. by amberheern Oct 14

Which period of the history USA ?
Can we have idea of the subject of your study ?
In which university do you prepare that ?
I am interested. :-)) by reel Oct 13

I would use this website as a resource for a research project with my 4th grade social studies. This would be great for assigning students different eras in the history of the USA. by amberheern Oct 12