Ahead of the curve: The future of performance management 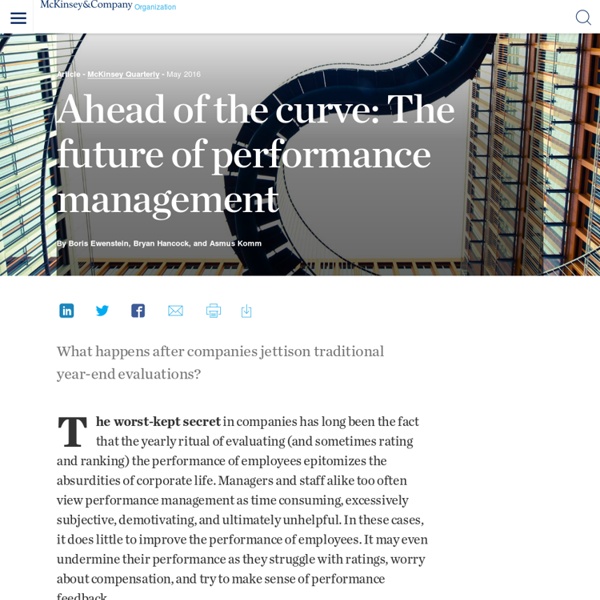 What happens after companies jettison traditional year-end evaluations? The worst-kept secret in companies has long been the fact that the yearly ritual of evaluating (and sometimes rating and ranking) the performance of employees epitomizes the absurdities of corporate life. Managers and staff alike too often view performance management as time consuming, excessively subjective, demotivating, and ultimately unhelpful. In these cases, it does little to improve the performance of employees. It may even undermine their performance as they struggle with ratings, worry about compensation, and try to make sense of performance feedback. These aren’t new issues, but they have become increasingly blatant as jobs in many businesses have evolved over the past 15 years. Yet nearly nine out of ten companies around the world continue not only to generate performance scores for employees but also to use them as the basis for compensation decisions. Answers are emerging. But change they must.

The blending of apps with our collaboration tools: An inevitable trend What's in an effective collaboration tool today? That's perhaps the most foundational question we can ask at the moment, as the seemingly unending procession of new applications and solutions continues as new entrants each promise in their own way to improve how we work together in digital environments. The nature of collaboration tools available today continue to evolve and specialize. How We Conduct 1:1s — NOBL Collective - The Future of Work When you become a manager, or leader, your responsibility shifts. Your role isn't to maximize the potential for the work, it's to maximize the potential of those around you. Yet so few leaders fulfill this core responsibility. You can blame a lack of training.

Should Companies Follow Ben and Jerry's Lead in Wages? Thirty-five years ago, a couple of counterculture confectioners in Burlington, Vt., developed a recipe that combined funky, chunky deliciousness, brilliant branding and granola-headed idealism. I'm talking about Ben Cohen and Jerry Greenfield and their iconoclastic Ben & Jerry's ice cream company. But it's neither Cherry Garcia nor Phish Food that's on my mind right now—well, maybe just a little—as much as it is the social pact that Messrs. The A to Z Guide to Culture Decks — NOBL Collective - The Future of Work New technologies spread faster than ever before. Consumer expectations leap from one category to another at ever-quicker speeds. And as more industries become digitized, the barrier to entry for competition falls. In this era, culture is your company's only truly sustainable competitive advantage.

How social tools can reshape the organization Not all social technologies bring equal benefits. In a new survey, respondents say the most valuable tools make it easier for employees to collaborate—and could even transform the way organizations work. While social technologies have become ubiquitous in business, not all tools—or the benefits companies see from their use—are created equal. Indeed, results from the latest McKinsey Global Survey on social tools suggest that a new generation of tools is enabling employees to collaborate in improved and innovative ways. Use Design Thinking to Build Commitment to a New Idea The logic we use to understand the world as it is can hinder us when we seek to understand the world as it could be. Anyone who comes up with new ideas for a living will recognize the challenges this truism presents. It means that to get organizational support for something new, the designer needs to pay as close attention to how the new idea is created, shared, and brought to life as to the new idea itself. The Normal Way of Generating Commitment… Normally, we commit to an idea when we are rationally compelled by the logic of the idea and we feel emotionally comfortable with it. In the modern world, we focus disproportionately on the logic, assuming that the feelings will naturally follow.

How Spotify Recruits Talent Spotify believes hiring the right developers is crucial, so they’ve created a lengthy recruitment process to make sure they bring on the best possible people. While your team may not need developers, their methodology can be adapted to bring on the right talent for your team. General introduction and screening. First, Spotify reviews the candidate’s resume. Greiner Growth Model of organizational change & evolution This article explains the Greiner Growth Model by Larry Greiner in a practical way. After reading you will understand the basics of this powerful business life cycle tool. What is the Greiner Growth Model? Organizations are always under way and according to the American organizational expert Larry Greiner, comparisons can be made with living organisms that go through several growth phases.

The people power of transformations A new survey suggests that for their transformations to succeed, organizations need employee buy-in at all levels, consistent communication, and better people strategies. Organizational transformations are hard work, and according to the latest McKinsey Global Survey on the topic, companies are no more successful at overhauling their performance and organizational health than they were ten years ago. A particular blind spot seems to be the failure to involve frontline employees and their managers in the effort. Transformations have their truisms. 22 Handy Slack Hacks Everyone Should Know — ReadThink (by HubSpot) 22 Handy Slack Hacks Everyone Should Know By: Carly Stec A couple months ago, the HubSpot team made the switch to Slack (one of the hottest real-time messaging apps on the market). Initially, it was hard to get used to uttering phrases like “Just Slack me” or “We were Slacking” in passing. But once we got more comfortable with the platform, we started to realize just how powerful it really is.

Applying lean production to the public sector Governments at all levels must deliver more for less. The principles of lean manufacturing offer surprisingly apt solutions. Governments around the world want to deliver better education, better health care, better pensions, and better transportation services. They know that impatient electorates expect to see change, and fast. But the funds required to meet such expectations are enormous—particularly in the many developed economies where populations are aging and the public sector's productivity hasn't kept pace with that of the private sector.

What Makes FC Barcelona Such a Successful Business “Blue and claret blowing in the wind. One valiant cry. We’ve got a name that everyone knows: Barça, Barça, Baaarça!” So runs the battle hymn of FC Barcelona (aka Barça), the Catalan soccer club that won the UEFA Champions League — the world’s most prestigious inter-club soccer championship — earlier this month, defeating Italy’s Juventus 3-1. With 23 Spanish League championships, 27 Copa Del Rey titles, and, after this last victory, as many as five Champions League trophies under its belt, Barca has earned a unique place in the annals of soccer.