'Women are just better at this stuff': is emotional labor feminism's next fro... 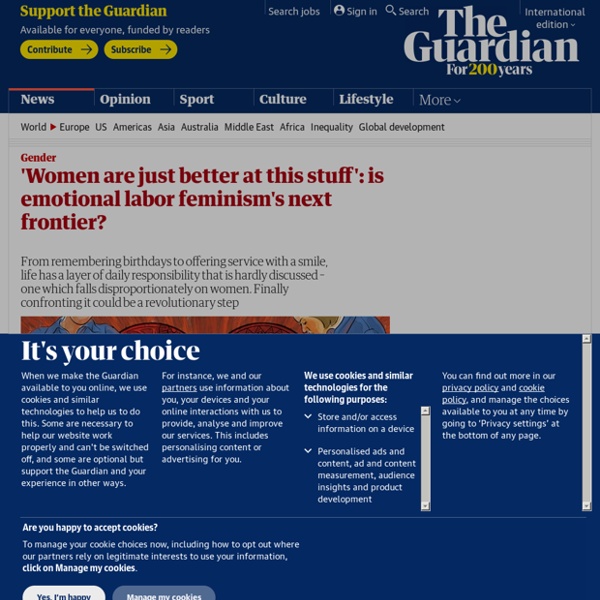 We remember children’s allergies, we design the shopping list, we know where the spare set of keys is. We multi-task. We know when we’re almost out of Q-tips, and plan on buying more. We are just better at remembering birthdays. We love catering to loved ones, and we make note of what they like to eat. We notice people’s health, and force friends and family to go see the doctor. We listen to our partner’s woes, forgive them the absences, the forgetfulness, the one-track mindedness while we’re busy organizing a playdate for the kids. But what if, much like childcare and house keeping, the sum of this ongoing emotional management is yet another form of unpaid labor? If you think this is pushing it, you would be wrong. It’s just taken the rest of us a while to catch on. Jennifer Lena, a sociologist and professor of arts administration at Columbia University, stares at me from across the rocky wooden café table we’re sharing. Lena doesn’t drink, though. “I don’t really get it.

Will This Powerful Campaign Make Men Do More Laundry? The laundry detergent brand Ariel India has launched a campaign called #ShareTheLoad encouraging men to help in household work. It's a much-needed message: a study by the brand found that 73% of Indian women felt their husbands prioritize relaxing over helping with housework, and 2/3 of Indian women felt that an inequality exists with housework. According to Ejaz Ghani, a U.N. economic advisor, "Despite recent economic advances, India’s gender balance for entrepreneurship remains among the lowest in the world. Let's Be Clear – My Gender Identity is Harmless Panel 1 (A person wearing glasses with short hair and a serious expression looks out from a purple circle) Justin: Let’s be clear. My gender identity is many things. But most of all?

Has your marriage lasted 50 years? Congratulations, you’re old Just kidding: Congratulations, you’re old and have had a long marriage. The Washington Post magazine has a feature out today called “The secret to a long-lasting marriage.” I don’t have a general comment on it, because I only made it to the third paragraph, and it’s probably worth reading. But the third paragraph is funny: They have beaten the odds of death and divorce: Of all current U.S. marriages, only 7 percent have reached the 50-year mark, according to the National Center for Family and Marriage Research at Bowling Green State University.

5 Totally Normal Questions Transgender People May Be Afraid to Ask, Answered One of my favorite concepts that I’ve encountered as an activist is the idea of “holding space.” To break it down further, “holding space” is about making room for certain experiences, feelings, or perspectives to be acknowledged and affirmed that may otherwise be pushed aside or invalidated. Holding space can be powerful. Why I Won't Call Myself 'Childfree' If you’re unfamiliar with the Childfree Movement, it’s a group of individuals and couples who have intentionally made the decision not to have children. They picked the term “childfree” instead of “childless” because the latter implies a life of wanting; a gnawing mortal sorrow pocked by regret and loneliness. If you think that’s dramatic, you’ve never been accosted about your choice not to procreate. People who have children can sometimes be mean to those of us who do not. They don’t just imply our flawed moral character, some of the nastiest among them straight-up say that we are selfish, shallow and have never known true love. When someone jabs at your life at its most basic — that is, the significance of your existence in its totality, it is the most harmful foul one human can inflict upon another.

To Men I Love, About Men Who Scare Me I got a promotion a few days ago, so I decided to stop for a drink on my way home — just me and my sense of accomplishment. I ended up alone in bar, running defense against a bouncer who held my ID hostage while he commented on my ass (among other things), and asked me vaguely threatening questions about my sex life. This is not a Yelp review. It’s not an angry rant, and it’s definitely not something women need to be reminded of. As far as I can tell there is only one good lesson to pull out of this otherwise shitty and all-too-familiar interaction, which is that in my experience, a lot of thoroughly decent men are still having trouble understanding it.

Emotional Labor: What It Is and How To Do It - Brute Reason Ages ago, I read this fantastic piece about practical things men can do to support feminism. Almost every item on the list really resonated with my experience, and this was one of the most resonant: 2. A Thank You Note To My Sex Ed Teacher Sexual education is often a defining experience in a person’s life. It usually (hopefully) happens at the beginning of adolescence, a time when a person is extremely impressionable and let’s face it, if sex ed is ignored or done poorly, it can be detrimental to your sexual health and attitude toward sex for the rest of your life. Up until recently, I hadn’t really given much thought to the importance of sex ed, and I’ve determined that it’s because my experience with sexual education was just absolutely top-of-the-line. So good in fact, that hearing what other people got for sex ed in middle and high school down right shocked me. Since this discovery, I’ve been thinking nonstop about what made my experience so positive and realized it was all thanks to one woman. I went to all girls school, and I received a full week of sexual education in science class every year.

Women considered better coders – but only if they hide their gender When a group of computer science students decided to study the way that gender bias plays out in software development communities, they assumed that coders would be prejudiced against code written by women. After all, women make up a very small percentage of software developers – 11.2% according to one 2013 survey – and the presence of sexism in all corners of the overwhelmingly male tech industry has been well documented. So the student researchers were surprised when their hypothesis proved false – code written by women was in fact more likely to be approved by their peers than code written by men.

How parents balance work and family when both work: 5 key findings Today’s American families are more likely than those of past decades to feature two full-time working parents. A new Pew Research Center report looks at how working moms and dads in two-parent households are balancing their jobs with their family responsibilities and how they view the dynamics of sharing child care and household responsibilities. Here are some key findings from the report: 1Two-parent households with a mother who does not work outside the home have grown much less common in the U.S. since 1970. Today, both parents work full time in 46% of these households. Only about a quarter of two-parent households now consist of a full-time working father and a mother who is not employed.

130+ Examples Of Cis Privilege in All Areas of Life For You To Reflect On and... “I just don’t see it,” my friend protested. “How do I have ‘cisgender’ privilege? I’m just normal. How is being normal a privilege?” What my friend didn’t realize in that moment was that seeing himself as “normal” – while seeing me, a transgender person, as “the other” – is exactly where privilege begins. When one group of people are treated as the “norm,” in which all of their experiences and perspectives are neutral or even desirable, while another group is seen as an “outsider,” it creates a social hierarchy. American policy fails at reducing child poverty because it aims to fix the poor Kindergarten students play at Guilford Elementary School in Loudoun County, Va. Due to high rates of poverty, Title I schools like Guilford receive special federal funding to provide full-day kindergarten classes. (Photo by Evelyn Hockstein/For The Washington Post)

6 Easy Ways to Make Me, a Transgender Person, Extremely Uncomfortable Nine times out of 10, when cisgender people ask me about my experiences as a queer, non-binary trans guy, they aren’t actually intending to make me uncomfortable. And yet, it happens. It happens a lot. And these situations can often cause harm to trans people who are trying to live their lives without being subjected to microaggressions like these. Whatever the intention, the result is that someone gets hurt. Which is why I think talking about it is a valuable thing — the more open and honest we can be, the more we can learn and grow, right?

language: a feminist guide This week everyone’s been talking about an article in the Economist explaining how men’s use of language undermines their authority. According to the author, a senior manager at Microsoft, men have a bad habit of punctuating everything they say with sentence adverbs like ‘actually’, ‘obviously’, ‘seriously’ and ‘frankly’. This verbal tic makes them sound like pompous bullshitters, so that people switch off and stop listening to what they’re saying. If they want to be successful, this is something men need to address.