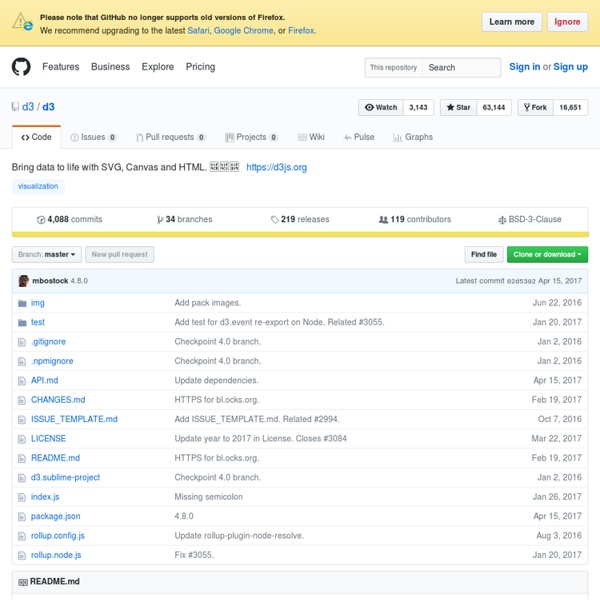 Understanding multi-dimensional arrays | Use Google Refine to Export JSON "That's great," you say. "But how can I edit the data to use the really cool Protovis examples?" The answer lies in multi-dimensional arrays. While this may sound intimidating, the concept is straight forward. All it really means is that a data element (the parent) may have subsets (children). In this example, race is the parent and the children are Asian, American Indian, etc. Let's take it a step further and look at race in three different counties in Florida. Now here's where it gets a bit tricky. This example is easy to understand but it's only the beginning. Filed under: Data Visualization

documentcloud/backbone SVG Wow! untitled The Moving Parts Tabletop initialization The simplest Tabletop initialization works like this With a function living somewhere else called `showInfo` . You pass in either ‘url’ as the full published-spreadsheet URL, or just ‘key’ if you're clever enough to cut apart the URL. ‘key’ is the key of the published spreadsheet. ‘url’ is the URL of the published spreadsheet. ‘callback’ is the callback for when the data has been successfully pulled. ‘simpleSheet’ can be true or false (default false). ‘parseNumbers’ can be true or false (default false). Tabletop itself Once you've initialized Tabletop you can access its good parts. ‘models’ are the ‘Tabletop.Model’s that were populated, one per worksheet. ‘data()’ returns the rows of the first model if you're in simpleSheet mode. Tabletop.Model Tabletop.Model is pretty boring, let's be honest. ‘.name’ : The name of the worksheet it came from (the tab at the bottom of the Spreadsheet) What the hell do I do with this? Working with TimelineSetter Notes Credits

Underscore.js OpenData - Home Redactor WYSIWYG editor on jQuery by James Fenimore Cooper Winding its way among countless islands, and imbedded in mountains, the "holy lake" extended a dozen leagues still further to the south. With the high plain that there interposed itself to the further passage of the water, commenced a portage of as many miles, which conducted the adventurer to the banks of the Hudson, at a point where, with the usual obstructions of the rapids, or rifts, as they were then termed in the language of the country, the river became navigable to the tide.​ "Come," he said, with a good-humored smile; "the buck that will take to the water must be headed, and not followed." The route taken by Hawkeye lay across those sandy plains, relived by occasional valleys and swells of land, which had been traversed by their party on the morning of the same day, with the baffled Magua for their guide.

VISLE CONCOURS PHOTO 2013 Examples Demos. Lots of demos. *neo glasses* View source on all these demos to see what they're made of. Static renderer This example statically renders documents on the server. View 'html' » General Editor This example shows the use of an Ace editor which can edit any ShareJS document. Edit anything » Wiki This example demonstrates using ShareJS to implement a wiki. Explore the wiki » Learn how to use Gephi Welcome to Gephi! Gephi is an open-source software for visualizing and analysing large networks graphs. Gephi uses a 3D render engine to display graphs in real-time and speed up the exploration. You can use it to explore, analyse, spatialise, filter, cluterize, manipulate and export all types of graphs. Getting Started New to Gephi? Quick Start Guide Supported Graph File Formats Official Tutorials Gephi is really easy to handle if you learn the basics. Popular Tutorials by the Community: Various Tutorials in Video: Non-English Tutorials: In French: In Spanish: In Chinese: 介绍 Gephi 的各项主要操作方法。 Datasets Let's download and try some datasets available on the wiki, like C.elegans brain network or the web mapping study EuroSiS for the European Union. Practical cases A Twitter tag, #madewithgephi, has been adopted to tell when Gephi was used. Facebook group Many experienced users can provide help on this group. Forum New users are welcome to post questions at the Gephi Support Forums. Wiki Papers Roadmap History