What happens in the brain when you learn a language? 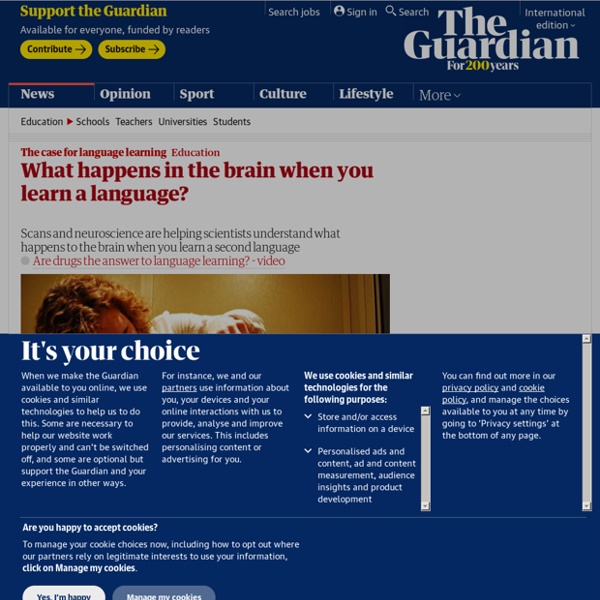 Learning a foreign language can increase the size of your brain. This is what Swedish scientists discovered when they used brain scans to monitor what happens when someone learns a second language. The study is part of a growing body of research using brain imaging technologies to better understand the cognitive benefits of language learning. Tools like magnetic resonance imaging (MRI) and electrophysiology, among others, can now tell us not only whether we need knee surgery or have irregularities with our heartbeat, but reveal what is happening in our brains when we hear, understand and produce second languages. The Swedish MRI study showed that learning a foreign language has a visible effect on the brain. In other words, the areas of the brain that grew were linked to how easy the learners found languages, and brain development varied according to performance. Looking at functional MRI brain scans can also tell us what parts of the brain are active during a specific learning task. Related:  asterb

Learn languages to boost your MBA In the increasingly globalised world of work, multinational companies are looking to hire business high-flyers who can communicate in several different languages. Europe’s top business schools are responding to this need; courses at Insead, IESE, HEC, and London Business School incorporate a language requirement as well as the opportunity to learn and practise another language. Insead teaches Mandarin at Fontainbleu and in Singapore. For some schools, a language component is a compulsory part of the MBA. London Business School (LBS) has no language entry requirement, but students cannot graduate unless they have reached ILR level 2 (limited working proficiency) in a second language. Seven core languages – Spanish, French, German, Portuguese, Mandarin, Arabic and Russian – are taught by visiting faculty from Kings College London’s languages department. At HEC business school in Paris, the language entry requirement is more relaxed.

To speak another language isn't just cultured, it's a blow against stupidity | Michael Hofmann | Opinion In 2004, the Labour government removed modern languages from the "core curriculum". That must be "core" as in "apple core". For it meant the study of a foreign language is no longer compulsory at schools past age 14. Theoretically, primary schools are supposed to introduce languages instead, but that's like the road sign with the big black arrow pointing one way and the skinny little red arrow going the other. A classic "mixed message", with a brute practical impact and a feeble sign of wouldn't-it-be-nice idealism-on-the-cheap. So what happened? Auf Wiedersehen, Dept, as the witticism goes. It turns out that these "redundant" languages can be jolly useful after all; only now it's much easier to find foreign nationals with English than Brits with another language. It looks like an education problem, but it's not an education problem. There is this strange cluelessness of the English. Foreigners will go on learning English, regardless. … we have a small favour to ask.

How Children Learn to Talk Have you ever wondered how children learn to talk? Many people, when asked that question, respond that they do it by imitating. This is at least partially true. Without imitation, we couldn't account for the fact that children in Texas usually learn Texan English, children in Paris usually learn Parisian French, and not vice versa. But imitation as an answer doesn't take us very far. At this point some would amend their position to say that children don't imitate others sentence by sentence. At any given point in development, a child's speech more closely resembles the speech of other children at the same stage of development than it does the speech of adults in the child's environment—even if there are not other children around. What do children do as they learn to talk? There is much evidence that children's early sentences result from the use of some sort of rules—and not simply from the haphazard imitation of adult sentences. Child: Want other one spoon, Daddy. But there's more.

European Day of Languages > Language Fun > Self-evaluate your language skills! The 'Self-evaluate your language skills' game helps you to profile your skills in the languages you know according to the six reference levels described in the Common European Framework of Reference for Languages (CEFR) developed by the Council of Europe (Language Policy Unit, Strasbourg). The CEFR exists in 39 languages and is used throughout the world in many contexts. The game is based on the Self-assessment grid contained in the CEFR and describes language activities. When answering the questions within the application please remember that this merely aims at setting your language profile and at encouraging you to pursue language learning! The self-assessment full procedure is slightly more demanding! Find out more about For webmasters: Do you want to add this flash game to your site?

What’s the Matter With ‘Me’? – Lingua Franca When did we decide that me was ungrammatical? Or if not ungrammatical, then maybe vulgarly self-promoting? “Sally, who had given the keys to Jim and I, discovered that she was locked out of her office.” “Congratulations from Susan and I on inheriting that time share!” “Sadly, the carton of tangelos promised to Mildred, Juan, and I never reached Bushwick.” The problem is hardly new, and writers on usage, including Mignon Fogarty (aka Grammar Girl), have gently admonished us to mind our I’s and me’s. Nonetheless, the resistance to the object pronoun me seems to be on the rise, at least to judge from what one hears from television broadcasters and well-educated public speakers. Perhaps we need some new mnemonics to help us out. That horrible pedantic streak in some of us, including this writer, lurches when the subject case pronoun intrudes itself. I don’t want to wade into the deep waters of what makes “Hi, it’s me” or “C’est moi” perfectly good constructions.

Games for Learning English, Vocabulary, Grammar Games, Activities, ESL Does being bilingual make you smarter? Language teacher and researcher Miguel Angel Muñoz explains the latest research on how being bilingual affects your brain, ahead of a British Council seminar in Cardiff on whether learning a foreign language makes you smarter. You can watch the live-streamed seminar on Tuesday, 3 June. More than half the world's population uses two or more languages every day It is hard to estimate the exact number of bilingual people in the world, as there is a lack of reliable statistics . But in 2012, a Eurobarometer survey established that 'just over half of Europeans (54%)' are bilingual, and other studies hypothesise that more than half of the world’s population is bilingual. So what about you? Being bilingual isn't black-and-white To answer that question, first we need to establish what being bilingual means. I, for example, am -- or used to be -- proficient in German, but I have not used my German regularly for a very long time. What are the costs of being bilingual? Don’t worry. 1. 2. 3. 1. 2. 3.

European Day of Languages > Language Fun > Same word - different meaning Best, Worst Learning Tips: Flash Cards Are Good, Highlighting Is Bad In a world as fast-changing and full of information as our own, every one of us — from schoolchildren to college students to working adults — needs to know how to learn well. Yet evidence suggests that most of us don’t use the learning techniques that science has proved most effective. Worse, research finds that learning strategies we do commonly employ, like rereading and highlighting, are among the least effective. (MORE: How to Use Technology to Make You Smarter) The scientific literature evaluating these techniques stretches back decades and across thousands of articles. It’s far too extensive and complex for the average parent, teacher or employer to sift through. The WorstHighlighting and underlining led the authors’ list of ineffective learning strategies. The BestIn contrast to familiar practices like highlighting and rereading, the learning strategies with the most evidence to support them aren’t well known outside the psych lab.

KQED Public Media for Northern CA There was a direct correlation between the children who’d heard a lot of parent talk and how prepared they were to learn once they arrived at school. Hart and Risley wrote, “With few exceptions, the more parents talked to their children, the faster the children’s vocabularies [grew] and the higher the children’s IQ test scores at age 3 and later.” For Suskind, a lightbulb went on. “The truth is, much of what you see in children born into poverty is analogous to children born deaf,” Suskind said. Bringing Parents On Board In Suskind’s new book, "Thirty Million Words," she explains the research behind the word gap in detail, along with her research-based initiative of the same name, aimed at boosting children’s brains in the first three years of their lives. Suskind’s vision was not just to give parents a directive -- you need to talk more to your child. Many parents believe that because they didn’t do well in school themselves, they have no business “teaching” their babies anything.

The Role of Metacognition in Second Language Teaching and Learning Resources Online Resources: Digests April 2002 EDO-FL-01-10 The Role of Metacognition in Second Language Teaching and Learning Neil J. Download a PDF of this digest. During a National Public Radio broadcast in the United States in March 1999, a sixth grader explained what she was learning from playing the Stock Market Game, an activity designed to help children become familiar with how the stock market functions. Metacognition can be defined simply as thinking about thinking. The distinctions between cognitive and metacognitive strategies are important, partly because they give some indication of which strategies are the most crucial in determining the effectiveness of learning. Rather than focus students' attention solely on learning the language, second language teachers can help students learn to think about what happens during the language learning process, which will lead them to develop stronger learning skills. A Model of Metacognition Preparing and Planning for Learning Conclusion