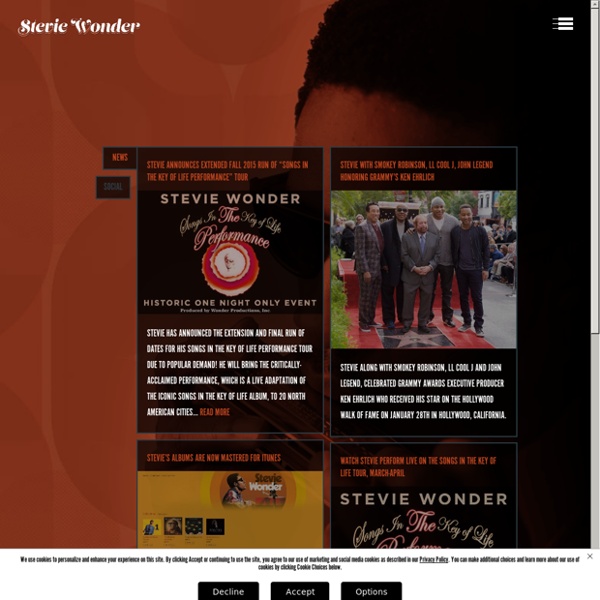 Related:  Songs in the Key of Life

Discover Music Online: The Ultimate Collection for Music Lovers » Life-Changing Arts If you love to discover new music, explore or simply play (with) music, these are the websites that will most successfully and easily help you accomplish just that: The best music websites available online! Musicovery Start by defining your mood on the mood pad, and move on to optionally select the decade(s) and music genres for your exploration. Listen by similar artist, or discover music more freely. Save your favorite songs and favorite artists. A wonderful tool for any music lover! Musicovery GrooveShark A free internet radio station without annoying announcements but with interactivity. GrooveShark AccuRadio A nice internet radio station with many different channels with the possibility to build your own, based on the existing ones. AccuRadio Ghostly Discovery Another mood-based music discovery tool, however the featured music is selected from their Ghostly International and Spectral Sound catalogs, so somewhat different than 'the usual'. Ghostly Discovery Moof Moof Nature Sounds Nature Sounds

War The Band Official Web Site - Home Page Carole King's Gershwin Prize Awarded By President Barack Obama - The Huffington Post WASHINGTON — President Barack Obama, saluting Carole King's five decades as an award-winning singer-songwriter, said Wednesday that music often is a place where people seek comfort and inspiration during trying times. Two days after much of Moore, Okla., was flattened by a powerful tornado that killed 24 people, Obama pledged anew that the nation will assist with the town's recovery and rebuilding for as long as it takes. "Eventually, life will go on and new memories will be made. New laughter will come. New songs will be sung," he said during a tribute concert for King in the East Room of the White House. Calling her a "living legend," Obama presented King with this year's Gershwin Prize for Popular Song, an award given by the Library of Congress. "I'm honored to be recognized by the Library of Congress as the fifth recipient and first woman as has been stated," the 71-year-old King said. King also sang "I Believe in Loving You," co-written with Hal David. Online:

Marvin Gaye Marvin Gaye (April 2, 1939 – April 1, 1984), born Marvin Pentz Gay, Jr., was an American singer-songwriter and musician. Following a period in Europe as a tax exile in the early 1980s, Gaye released the 1982 Grammy Award-winning hit "Sexual Healing" and the Midnight Love album. Since his death in 1984, Gaye has been posthumously honored by many institutions, including the Grammy Lifetime Achievement Award and the Rock and Roll Hall of Fame.[3] Early life[edit] Marvin began singing in church at age four and was accompanied by his father on piano. Marvin attended Cardozo High School and joined several doo-wop vocal groups, including the Dippers and the D.C. Career[edit] Early career[edit] A 1959 promotional picture of Harvey and the "New Moonglows". Initial success[edit] What's Going On and subsequent success[edit] Gaye performing live at the Oakland Coliseum on January 4, 1974 during his comeback 1974–75 tour.

Guido of Arezzo Statue of Guido in Arezzo Guido of Arezzo's house with plaque Guido was a monk of the Benedictine order from the Italian city-state of Arezzo. Recent research has dated his Micrologus to 1025 or 1026; since Guido stated in a letter that he was thirty-four when he wrote it,[1] his birthdate is presumed to be around 991 or 992. His early career was spent at the monastery of Pomposa, on the Adriatic coast near Ferrara. While there, he noted the difficulty that singers had in remembering Gregorian chants. Guido is credited with the invention of the Guidonian hand,[2][3] a widely used mnemonic system where note names are mapped to parts of the human hand. The computer music notation system GUIDO music notation is named after him and his invention. See also[edit] References[edit] External links[edit]

Ohio Players, Leroy Sugarfoot Bonner Ohio Players 2 Hour Spectacular: Featuring a 45 min Interview with Leroy "Sugarfoot" Bonner, Varee Is Love, Funky Worm, Walt's First Trip, Pain, Pleasure, Ecstasy, Fire, Sweet Sticky Thing, Jive Turkey, Heaven Must be Like This, Fopp, I Want to be Free, Climax, Love Rollercoaster, Far East Mississippi, Who'd She Coo, O-H-I-O. Hosted by Bob Davis and ELP. Concert Review: Sugarfoot's Ohio Players, (Masters Of Funk) @ Dell Music Center in Philly (July 5th, 2010) The newly refurbished Dell Music Center (formerly the Robin Hood Dell East-Essence of Entertainment) is up and running and running. The worlds of soul, r&b, funk, jazz and even contemporary gospel will all joyously collide here and Soul Patrol will be on the scene giving you all some nice reviews of this classic black music. The Masters of Funk are merely 2010's version of the old UNITED WE FUNK tours of the 90's and early new millennium. Tonight's lineup was really no different with one notable exception: Sugarfoot's Ohio Players.

A song for the day | Thoughts on life Gil Scott-Heron We Got The Solution! A Flashpoint Blog

Related:
Related:  Songs in the Key of Life