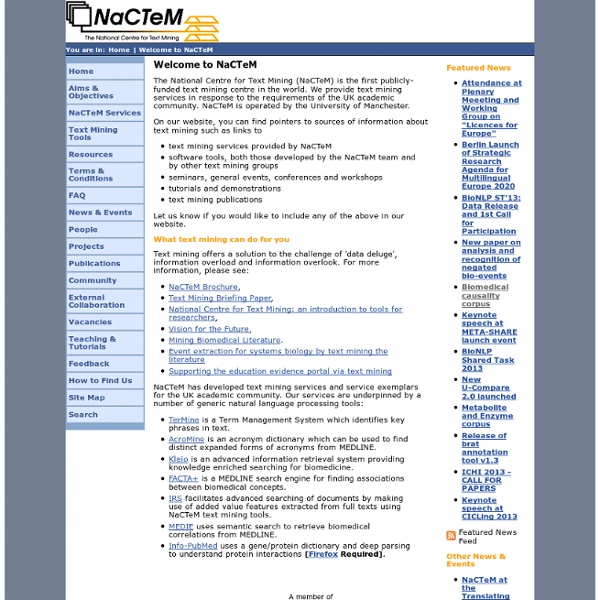 The Stanford NLP (Natural Language Processing) Group About | Citing | Questions | Download | Included Tools | Extensions | Release history | Sample output | Online | FAQ A natural language parser is a program that works out the grammatical structure of sentences, for instance, which groups of words go together (as "phrases") and which words are the subject or object of a verb. Probabilistic parsers use knowledge of language gained from hand-parsed sentences to try to produce the most likely analysis of new sentences. These statistical parsers still make some mistakes, but commonly work rather well. Their development was one of the biggest breakthroughs in natural language processing in the 1990s. You can try out our parser online.

Retail + Social + Mobile = @WalmartLabs Eric Schmidt famously observed that every two days now, we create as much data as we did from the dawn of civilization until 2003. A lot of the new data is not locked away in enterprise databases, but is freely available to the world in the form of social media: status updates, tweets, blogs, and videos. At Kosmix, we’ve been building a platform, called the Social Genome, to organize this data deluge by adding a layer of semantic understanding. Conversations in social media revolve around “social elements” such as people, places, topics, products, and events.

15 Top Search Engines For Research It’s no secret that there are heaps of useless websites on the Internet—and it is an endless challenge to sift through the rubbish to get what we really need. Fortunately, Web 2.0 has recently evolved to appeal to niche markets—and one of them is education. The lives of teachers, professors and students are hard enough as it is with demanding hours, straining subject matter and endless research. Hidden iframe injection attacks [Updated on October 27, 2009 with new a version of the script] It is a shame that after all those posts about security, some of my websites were under attack today. Shoban and Anand emailed me about this today morning (Thanks guys) and I tried to understand what was going on. To my utter disbelief more than 10 websites hosted in the same server were affected by the attack.

Parsing Within computational linguistics the term is used to refer to the formal analysis by a computer of a sentence or other string of words into its constituents, resulting in a parse tree showing their syntactic relation to each other, which may also contain semantic and other information. The term is also used in psycholinguistics when describing language comprehension. In this context, parsing refers to the way that human beings analyze a sentence or phrase (in spoken language or text) "in terms of grammatical constituents, identifying the parts of speech, syntactic relations, etc." [2] This term is especially common when discussing what linguistic cues help speakers to interpret garden-path sentences. Human languages[edit]

Cluster Execution Compute clusters often run idle because of a lack of applications that can be run in the cluster environment and the enormous effort required to operate, maintain, and support applications on the grid. KNIME Cluster Execution tackles this problem by providing a thin connection layer between KNIME and the cluster, which allows every node running in KNIME and every application integrated in KNIME to be executed on the cluster. Submission of data to the cluster and collection of the results is made very simple. Long-running analysis workflows can be executed on the compute cluster, thus releasing local resources for other productive work.

Crossfilter Fast Multidimensional Filtering for Coordinated Views Crossfilter is a JavaScript library for exploring large multivariate datasets in the browser. Crossfilter supports extremely fast (<30ms) interaction with coordinated views, even with datasets containing a million or more records; we built it to power analytics for Square Register, allowing merchants to slice and dice their payment history fluidly. 15 Great Mindmapping Tools and Apps Mindmapping is the process of drawing up diagrams that show relations between various ideas, tasks or information. For many of us this shows to actually be a way of taking notes that can be more useful than just writing down keywords or sentences like we do on a to-do list. By drawing mind maps you actually visualize your tasks and how each task can influence each other in a better way, making your brain remember more easily and/or come up with new ideas. The Tools