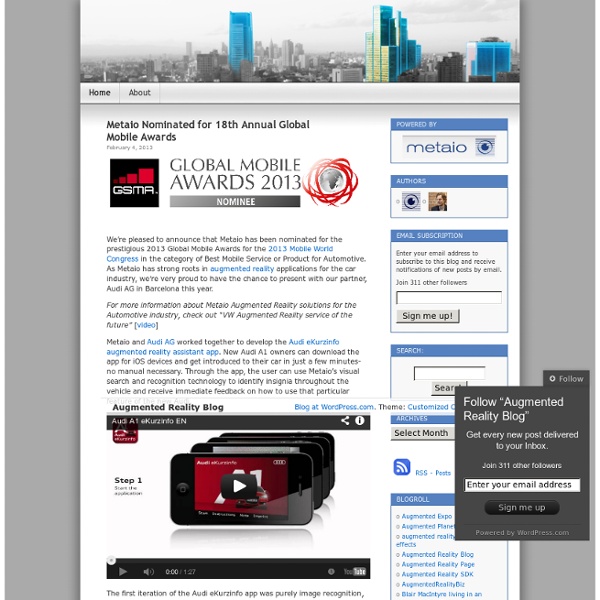 10 Amazing Augmented Reality iPhone Apps While Lawnmower Man may have led us to believe the future was a virtual one, it seems that in fact augmented reality (the overlaying of digital data on the real world) is where we're headed. A buzz technology right now, augmented reality apps are quickly gaining momentum on the iPhone. So to add to the quick overview of six AR apps we brought you earlier, we sort the digital wheat from the pixellated chaff to bring you ten AR apps for the iPhone that vary from functional, to educational, to just plain fun. 1. Although the wisdom of getting drunk people to wave their iPhones around on today's mean streets is questionable, if you drink responsibly, as this Stella Artois-backed app urges you to, this could be a handy tool. 2. Another corporate-backed app, this time by Plantronics, is WorkSnug, an iPhone app that finds digital nomads a place to lay their weary laptop. 3. This star map app will spell out the stars, planets and constellations for you. 4. 5. 6. 7. 8. 9. 10. iPew

– Living in an Augmented Reality So, Google has finally released some pics and a video showing off their “Project Glass” head-worn display concept. I have many reactions to the ideas and concepts presented in it, some good and some bad. I think the glasses exhibit some nice industrial design, for example (although they’re still to geeky for broad adoption). And the idea of them being a stand-alone device is really cool (complete with Android phone functionality and a variety of sensors for understanding and interacting with the world); it’s something I’ve mocked up in my group, as have others around the world, and have been proposing to research sponsors for years (but, most of us don’t do hardware, so it’s not like we could have ever done this pretty a job!). Alas, though, my main reaction to the video is “Oh no!” Why oh why, Google, did you feel the need to release a video that your project cannot live up to? Why do I say the video is “fake” and that the product can’t live up to it? Field of view. Like this: Related

Hands On With Boot2Gecko, the Mobile OS Built Entirely on Web Standards | Gadget Lab Mozilla came to the CTIA Wireless show in New Orleans with phones running its in-development Boot2Gecko operating system. Photo: Nathan Olivarez-Giles/Wired NEW ORLEANS — Mozilla is most famous for its desktop software, so seeing the non-profit, open-source-oriented company at a trade show for the wireless industry initially seems odd, even dissonant. “The mobile space is different than the desktop web,” Todd Simpson, Mozilla’s chief of innovation, told Wired at CTIA. With that in mind, Simpson and other Mozilla honchos attended their first CTIA convention, showing off phones running their operating system project, Boot2Gecko, or B2G. ‬”The interest we’ve seen from operators so far is because we’re offering the open web on a smartphone, and anyone can grab it and use it however they’d like.” ‬The B2G operating system, its user interface, and all the apps it runs are built entirely using modern web standards, such as HTML5 and JavaScript. But, again, Boot2Gecko is in its early stages.

Most Mobile Time Spent In Apps: Google Has Top Reach, Facebook Has Highest Engagement Mobile analytics provider Flurry reported previously that people are spending huge amounts of time with mobile apps, more time than with the mobile browser and more time than on the PC. This may seem to some implausible, but comScore adds further credibility to the findings with its first “Mobile Metrix 2.0″ report. The data show that “4 in every 5 mobile media minutes” is spent with apps (vs. the mobile browser). Google has the greatest mobile reach of any company. Below are the top US smartphone properties, combining app and browser traffic. Earlier this month Flurry reported that time spent with social networking apps has tied games, which had been the leading category in terms of engagement. Time spent with some social networking apps exceeds “corresponding time spent by users via traditional web access,” according to comScore. By comparison, Twitter saw roughly 2 hours of mobile engagement during March.

GuiM LED Lights Make Augmented Vision a Reality | Elemental LEDucation LED Lights Make Augmented Vision a Reality Okay, this is just freaky. We know LED lights are versatile enough to be used for practically anything, but LED contact lenses? Once miniature green LEDs are developed (and they’re in the works, as of now), full color displays will be possible. Lead researcher Babak Parvis comments “You won’t necessarily have to shift your focus to see the image generated by the contact lens,” it would just appear in front of you and your view of the real world will be completely unobstructed when the display is turned off. Ah, the real world. Thanks to Extreme Tech for the quote and Trendhunter for the images. By the way, these freaky LED contact lenses may still be a product of the future, but a lot of cool LED products are of the present!

iPhone 5 News - Everything about iPhone 5 How To Quickly Switch Between Multiple Apple IDs / iTunes Accounts On iPhone, iPad, iPod touch Advertisements It is becoming increasingly common that iPhone and iPad owners who use the App Store on a regular basis may have more than one Apple iTunes account through which they purchase and download apps. This could be for a number of reasons including holding separate accounts after emigrating to a new country, holding different IDs for the purchase of different accounts or merely just because it’s a free world and people can do whatever they wish. In circumstances when a single device is used by a family household, and each member of that family has their own account in order to buy content and apps, it can become a bit of a logistical nightmare to update all of those apps if they have been purchased across multiple accounts. Step forward a package in Cydia known as AccountChanger, which is aptly named considering its only function in life is to allow the seamless switching between Apple IDs through the Updates section of the official App Store.

How To Receive Push Notifications From iPhone And iPad On Your Mac Or Windows PC Advertisements For those among us who are Mac OS X users, you will no doubt be familiar with the Growl notification service. Growl is described as the ultimate notification service for OS X and is by far one of the easiest methods available for keeping in touch with installed applications, and any messages or alerts that they may give. Different users appreciate the simplicity of Growl for a number of reasons, with one of the main ones being that it works right out of the box and doesn’t have any complicated setup procedures. Applications that are Growl compatible will simply just work with the system without any fuss. With that being said, Growl does offer support for a number of more advanced options for users who wish to get a little bit more technical when it comes to their notifications. GrowlNotifier is a relatively simple offering in terms of user interaction and initial setup. Of course, you will need to jailbreak your device to install this tweak.

Tip: How to make your iPhone or iPad run faster - Mobile Phone My iPhone (3GS), now nearing its second birthday, has seemed sluggish for a few months. It started around the same time that I installed iOS 5, that latest major update to the mobile operating system. When iOS 5.1 came out a few weeks ago, I wondered whether it would only exacerbate the problem when I installed it. Would the OS update take up even more space on my little phone, making it run even slower? You don't need to know much at all about how your iPhone or iPad works, or even how much a gigabyte is, to make your Apple mobile device run faster. 5 Tips for Making Your iPhone or iPad Run Faster 1. At the very top, you'll see two numbers: GB available and GB used. You don't need to understand these numbers deeply. Note that when you add the available space and the used space, it won't add up to the total size of your phone (e.g., a 16GB iPhone will appear to have only about 13.6GB total space) because it doesn't include the space being used by the operating system. 2.