Welcome to USA for Kids 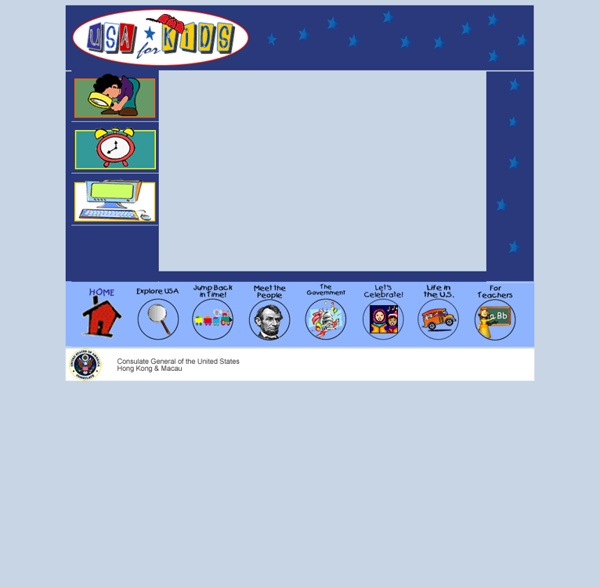 Vocabulary Games and Resources Canada Facts for Kids: Easy to understand and fun to read facts about Canada Here are some interesting Canada Facts for Kids which were choosen and reseached by kids especially for kids. Population: 35,4 million people (2014)Capital: Ottawa 950,000 inhabitants (2014)Name: CanadaGovernment: DemocracyLanguages: English, FrenchReligion: mainly Christians (Roman Catholics and Protestants)Currency: 1 Canadian Dollar (CAD)=100 Canadian centsNational Symbols: Maple Leaf and BeaverHistory: Canada's biggest bay, Hudson Bay, was discovered in 1610. Since the 16th century, both French and English kings have ruled over the country. Canada gained independence from Britain in 1867. Canada Map: Where is Canada? Canada Map Canada is in Northern America and shares borders with the United States of America. The longest part of the border is shared with the US state of Alaska and is more than 2,475km/1,538miles long. Canada Geography Canada is the second biggest country in the world, after Russia - measured by total area! Niagara Falls Canada Attractions for Kids Cycling in Canada

Project-based learning, the USA and Authentic Video in the EFL classroom | Elisabeth Horn The Globe Trekker/Pilot Guides video collection is a treasure trove for any English teacher. It encompasses extensive material from every corner of the world, and especially English-speaking countries are lavished with attention. Australia, Canada, Scotland, Wales, Ireland, England – you name it. Even individual cities are endowed with an approx. 50-minute complete video of its own, like London, New York City, San Francisco, Los Angeles, New Orleans to name but a few. Covering the United States satisfactorily in the language classroom is a daunting project, especially if you want to give your students more than a superficial understanding of its history, geography, language and people. Most textbooks for EFL students fall short in this respect, and it’s understandable – time available is limited and there is so much more that needs to be covered. In addition to making this initial decision, there are quite a lot of follow-up issues to consider: The next step is more work-intensive.

Speak English! British Life and Culture in the UK - Woodlands Junior School 5 Minute English - ESL Lessons - Helping you learn English Fun India Facts for Kids - Interesting Information about India India is officially known as the Republic of India. India has the second largest population in the world, with over 1.2 billion people (1,205,073,612 as of July 2012). India is the seventh largest country by total area. India belongs to the continent of Asia, it is bordered by the countries of Bangladesh, Bhutan, Burma, China, Nepal, and Pakistan. O, Canada! 9C