Shapes for Sounds: A Visual History of the Alphabet 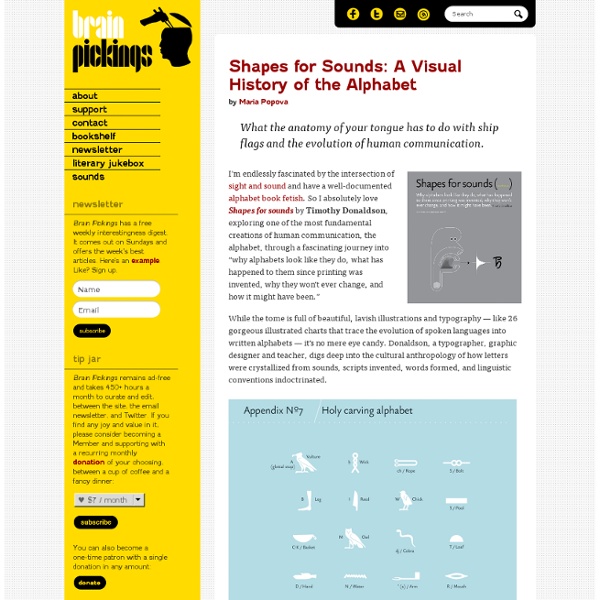 by Maria Popova What the anatomy of your tongue has to do with ship flags and the evolution of human communication. I’m endlessly fascinated by the intersection of sight and sound and have a well-documented alphabet book fetish. So I absolutely love Shapes for sounds by Timothy Donaldson, exploring one of the most fundamental creations of human communication, the alphabet, through a fascinating journey into “why alphabets look like they do, what has happened to them since printing was invented, why they won’t ever change, and how it might have been.” While the tome is full of beautiful, lavish illustrations and typography — like 26 gorgeous illustrated charts that trace the evolution of spoken languages into written alphabets — it’s no mere eye candy. The alphabet is one of the greatest inventions; it has enabled the preservation and clear understanding of people’s thoughts, and it is simple to learn. Donating = Loving Brain Pickings has a free weekly newsletter. Share on Tumblr

Symbol Signs: Helvetica Man and Beyond by Maria Popova A man and a woman walk into a sign, or what Helvetica has to do with slipping on ice. In 1974, the U.S. Department of Transportation commissioned AIGA to produce Symbol Signs — a standardized set of 34 symbols for the Interstate Highway System. Five years later, 16 more symbols were added to complete what’s become known as “the Helvetica of pictograms” — a 50-piece symbol set so iconic and universally pervasive it has become an integral part of our visual language. But beyond their practical application, Symbol Signs have amassed a cultish following in the design community, generating derivative work ranging from the quirky to the wildly creative. Artist Iain Anderson’s symbol-based short film, Airport, was a finalist in the 2005 Sydney Film Festival. A few weeks ago, we tweet-raved about Symbolic Gestures — a wonderful exposé on all the creative ways in which the National Park Service has adapted the iconic symbols to convey a wide and incredibly rich range of contexts.

Tool detects patterns hidden in vast data sets Researchers from the Broad Institute and Harvard University have developed a tool that can tackle large data sets in a way that no other software program can. Part of a suite of statistical tools called MINE, it can tease out multiple patterns hidden in health information from around the globe, statistics amassed from a season of major league baseball, data on the changing bacterial landscape of the gut, and much more. The researchers report their findings in a paper appearing in the December 16 issue of the journal Science. From Facebook to physics to the global economy, the world is filled with data sets that could take a person hundreds of years to analyze by eye. Sophisticated computer programs can search these data sets with great speed, but fall short when researchers attempt to even-handedly detect different kinds of patterns in large data collections. MINE is especially powerful in exploring data sets with relationships that may harbor more than one important pattern.

Sweet Salt: Sugar Production in Medieval Cyprus - fergusonmurraysculpture.com Medieval sugar processing facilities at Kolossi, January 2013. The history of sugar is a fascinating subject (for me at least) and a stop at the one-time HQ of the Knights Hospitaller at Kolossi in January 2013 prompted me to put together this essai (in homage to Montaigne) on the ‘sweet salt’ (as sugar was known to the Crusaders) trade when Cyprus was Europe’s leading medieval producer. Human production and consumption of sugar as a mass-produced sweetener developed slowly but once it took off there was no stopping it. The extraction of cane juice from the sugar cane plant was known in South East Asia many thousands of years ago and the people of New Guinea domesticated the sugar cane 10,000 years ago. The cultivation of cane spread rapidly through Asia and China and India – where juice began to be converted into crystals. South end of the sugar factory, Kolossi, January 2013. Sugar cane requires constant, year-round irrigation for optimal production. Sugar mill at Potomia, January 2013

Infographic Of The Day: The Insane Choices You Face At The Drugstore Just 10 years ago, getting something for a headache or a cold at the drugstore was a simple enough affair: Ibuprofen or Acetaminophen? No longer: Drugstore aisles are now an eye-melting maze of choices, with products advertising everything from time-release to gel-caps to flavors to different dosages. I half-expect to find tooth-whitening Tylenol, one day soon. But despite all the decision fatigue this induces, I’ll bet this infographic will come as a shock. [Click to enlarge] At first sight, you might assume that this is merely an illustrative chart--that all the branches are simply hypothetical choices that one might face. This, of course, is by design: The infographic is, after all, an advertisement for Help Remedies, a company which offers single-use packets at drugstores labeled simply with your symptoms. You can spy that trend in all manner of industries: Just think about what buying a computer was like 10 years ago.

Applying Sentiment Analysis to the Bible « OpenBible.info Blog This visualization explores the ups and downs of the Bible narrative, using sentiment analysis to quantify when positive and negative events are happening: Full size download (.png, 4000×4000 pixels). Things start off well with creation, turn negative with Job and the patriarchs, improve again with Moses, dip with the period of the judges, recover with David, and have a mixed record (especially negative when Samaria is around) during the monarchy. The exilic period isn’t as negative as you might expect, nor the return period as positive. Methodology Sentiment analysis involves algorithmically determining if a piece of text is positive (“I like cheese”) or negative (“I hate cheese”). I ran the Viralheat Sentiment API over several Bible translations to produce a composite sentiment average for each verse. The visualization takes a moving average of the data to provide a coherent story; the raw data is more jittery. Update October 10, 2011 Full size download (.png, 2680×4000 pixels).

Print or online? One masterpiece and one screw-up – VisualJournalism THE NEW YORK TIMES just ran an interesting article titled ‘It’s All Connected: A Spectator’s Guide to the Euro Crisis’ and the intro ending with ‘The graphic here helps you see the intertwined complexities.’ They also ran an interactive visualization online with the same title, but with the intro ending in ‘Here is a visual guide to the crisis’. Pretty much the same stuff – except that I challenge you to understand and gain insight from the online-version: See it here: Before reading the print-version. See it here: The printed version has a lot of text, which leads you through the story and educates you along the way on a highly complex system. The online version shows you the data and tells you some accompanying facts – but doesn’t tell you the story. Big differences in the looks too: The print-version is elegant with a good colour and easy focus on the worrisome countries. In an effort to make the interactive version more useful, it has been split into six smaller sub-stories.

Is history fiction? | Evatt Foundation The necessity for and difficulty of finding the truth in history Ann Curthoys & John Docker The context for Is History Fiction? What is History? asked E H Carr in his influential text of that name, first published in 1961, and reprinted endlessly since. The question we address in our book is more limited: is history fiction? The questions we address include the following. • Can historians tell the truth about the past? • Should history be written for the present or for its own sake? • Is it possible to see the past in its own terms? • Should we make moral judgements about people and actions in the past? • Are histories shaped by narrative conventions, so that their meaning derives from their form rather than the past itself? These are hardly new questions; indeed in our book we show how historians have always pondered the problem of historical truth, and have always markedly differed over how to achieve it. Our own book has been shaped by many present contexts. The postmodernism question