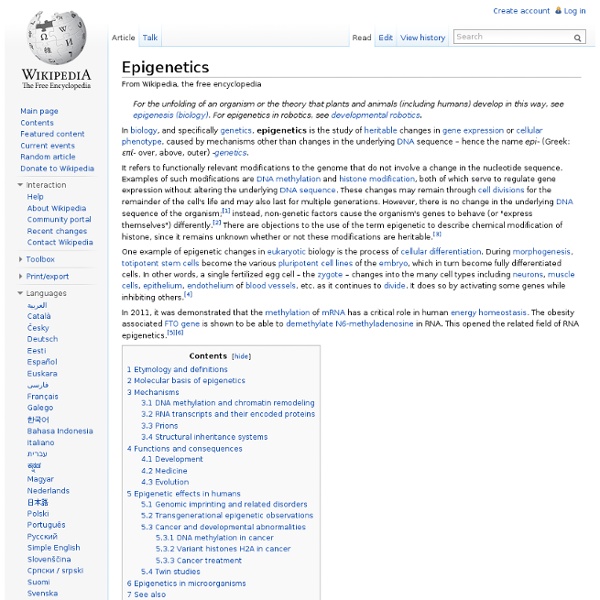 One example of an epigenetic change in eukaryotic biology is the process of cellular differentiation. During morphogenesis, totipotent stem cells become the various pluripotent cell lines of the embryo, which in turn become fully differentiated cells. In other words, as a single fertilized egg cell – the zygote – continues to divide, the resulting daughter cells change into all the different cell types in an organism, including neurons, muscle cells, epithelium, endothelium of blood vessels, etc., by activating some genes while inhibiting the expression of others.[5] Historical usage of "epigenetics"[edit] The term "epigenetics" has also been used in developmental psychology to describe psychological development as the result of an ongoing, bi-directional interchange between heredity and the environment.[13] Interactivist ideas of development have been discussed in various forms and under various names throughout the 19th and 20th centuries. Contemporary usage of "epigenetics"[edit]

Bonghan Channels in Acupuncture By David Milbradt, LAc As a practicing acupuncturist, I find that I continually wonder how a few well-placed needles can have such transformative results in my patients. Over the past 10 years I have read explanations that vary from the vague and mystical idea that the needles move qi in the meridians to scientific explanations where the effects of acupuncture stimulus are explained entirely by its influence on the nervous system. I read all of these theories with interest, but somehow they do not quite explain the day-to- day changes that I see in my clinic. Most of these theories seem limited and tend to restrict or underestimate the diversity of healing responses that I see in my patients. Recently, however, a number of scientific papers have been published that have the potential to revolutionize our understanding of how acupuncture works. Figure 1. The science of embryology has a clear understanding of only the very earliest stages of fertilization and development. Resources

Science & Environment - Why everyone must understand science Many people feel excluded by science, but philosopher AC Grayling says this makes us slaves to technology. The less we know the more likely we are to be manipulated by others. Science is undoubtedly humanity’s greatest achievement, says AC Grayling, Master of the New College of the Humanities . People have to wake up to the fact that they have to be part of the story in thinking about science, and thinking about the meaning of science as it applies to our world. People feel excluded by science and debates about science, they use laptops, they fly in planes, use appliances in the home and they don’t know what’s behind this technology. That is a problem, as it turns people into the slaves of our technology. People are aware that there are lots of problems with the environment and the climate. We have to start this at school. We have to have a healthy scepticism, says Grayling, people can’t just shut their eyes to things that are important.

I Want Scientific Proof First! | Tapping EFT Emotional Freedom Techniques EFTzone If you’re looking for a lot of proof and scientific studies about EFT, you aren’t going to find them. Not yet anyway. You will find some research available at the Association for Comprehensive Energy Psychology Website. Also check Fred Gallo’s site and David Feinstein’s information. Both are well respected people in the field. Do this. A few Websites that you may find of interest perusing are Science Daily, Junk Science and QuackWatch. In conclusion, try my unscientific experiment. Put EFT to your test and decide for yourself.

Watson (computer) Watson is an artificially intelligent computer system capable of answering questions posed in natural language,[2] developed in IBM's DeepQA project by a research team led by principal investigator David Ferrucci. Watson was named after IBM's first CEO and industrialist Thomas J. Watson.[3][4] The computer system was specifically developed to answer questions on the quiz show Jeopardy! Watson had access to 200 million pages of structured and unstructured content consuming four terabytes of disk storage[8] including the full text of Wikipedia,[9] but was not connected to the Internet during the game.[10][11] For each clue, Watson's three most probable responses were displayed on the television screen. The high-level architecture of IBM's DeepQA used in Watson[14] According to IBM, "more than 100 different techniques are used to analyze natural language, identify sources, find and generate hypotheses, find and score evidence, and merge and rank hypotheses When playing Jeopardy!

The Science Behind EFT - Emotional Freedom Techniques | Articles from EFTfree.net Latest EFT Science News:New Study Finds EFT Helps Ease Presentation Anxiety In University StudentsAcupoint Stimulation in Treating Psychological Disorders: Evidence of Efficacy by David FeinsteinSymptoms: A Choice Between Suppression And Meaning by Larry Burk, M.D. To understand the science behind EFT, one must look in many directions towards new frontiers in body/mind medicine. Recent discoveries in the fields below illustrate how the mind, body and emotions are intricately connected and can be studied from different perspectives. The Scientific Basis of Acupuncture & Acupressure Exciting new research has begun to establish an observable scientific basis for the subtle energy system upon which EFT is based. Epigenetics Traditionally, science has believed that our genes are fixed and that nothing can change genetic determinism. Psychoneuroimmunology (PNI) This new branch of science has emerged in the last 35 years. Brain Plasticity Links to EFT-Related Science Articles and Studies: Dr.

Peter Joseph responde: El activismo ético dentro del sistema no es la solución. Andy Beckett: The forgotten story of Chile's 'socialist internet' | Technology During the early 70s, in the wealthy commuter backwater of West Byfleet in Surrey, a small but rather remarkable experiment took place. In the potting shed of a house called Firkins, a teenager named Simon Beer, using bits of radios and pieces of pink and green cardboard, built a series of electrical meters for measuring public opinion. His concept - users of his meters would turn a dial to indicate how happy or unhappy they were with any political proposal - was strange and ambitious enough. And it worked. Unlike West Byfleet, Chile was in revolutionary ferment. Stafford Beer attempted, in his words, to "implant" an electronic "nervous system" in Chilean society. When the Allende administration was deposed in a military coup, the 30th anniversary of which falls this Thursday, exactly how far Beer and his British and Chilean collaborators had got in constructing their hi-tech utopia was soon forgotten. In the early 60s, his company did some work for the Chilean railways.