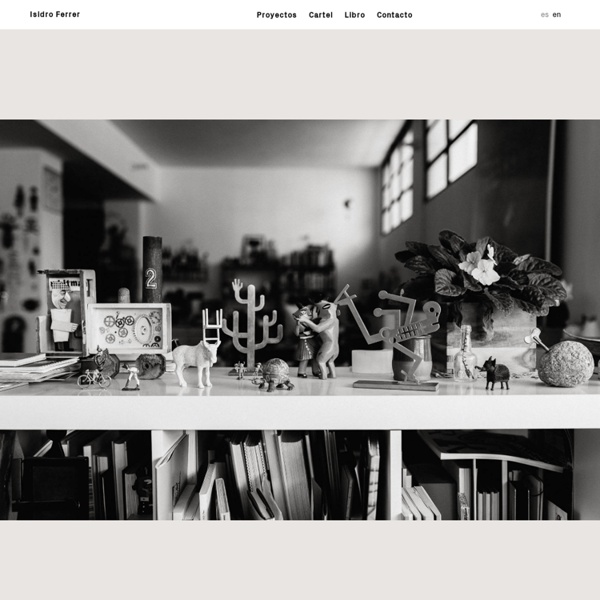 100 Ideas That Changed Graphic Design by Maria Popova From visual puns to the grid, or what Edward Tufte has to do with the invention of the fine print. Design history books abound, but they tend to be organized by chronology and focused on concrete -isms. From publisher Laurence King, who brought us the epic Saul Bass monograph, and the prolific design writer Steven Heller with design critic Veronique Vienne comes 100 Ideas that Changed Graphic Design — a thoughtfully curated inventory of abstract concepts that defined and shaped the art and craft of graphic design, each illustrated with exemplary images and historical context. Idea # 16: METAPHORIC LETTERING Trying to Look Good Limits My Life (2004), part of Stefan Sagmeister’s typographic project '20 Things I Have Learned in My Life So Far.'

Maskull Lasserre Recent, Current, and Upcoming Exhibitions: Gallery Pierre-Francois Ouellette Art Contemporain, MontrealSolo ExhibitionNovember 30 - January 2014Perimeter Museum Villa Rot, Burgrieden, GermanyGroup Exhibition27th October 2013 until 16th February 2014Auf Schritt und Tritt / At Every Turn 40 Must Follow Design Blogs On Twitter Twitter is just simply a great tool in order to network with other design blogs within the design community. This article contains a run down of 40 must follow design blogs which are on twitter with a brief description about each blog. Following bloggers on twitter is great in order to learn more about about that specific design blog and, to keep up to data or simply just to network with other great people who know a lot about design. Leave Your Twitter URL In The Comments

Tom Sachs: Works Works Untitled ("I loved my sister's Barbie so very much. My parents, afraid that I'd turn out gay, encouraged carpentry. In secrecy I made my own. It wasn't love, only lust.”)2013plywood Barbie Slave Ship2013mixed media What Makes Iconic Design: Lessons from the Visual History of the London Underground Logo by Maria Popova Celebrating 150 years of elegant balance between tradition and innovation. The London Underground is renowned around the world for its iconic map, which has sprouted a number of creative derivatives and parodies, and its formidable legacy of graphic design. But most legendary and celebrated of all is its bar-and-circle logo — also known as the bulls-eye or the roundel — which celebrates its 150th birthday in 2013 and which is comparable only to an international icon like I♥NY.

lbumes web de Picasa - A non-4AD tribute... +You Search Images Maps A Kid’s Guide to Graphic Design by Iconic Designer Chip Kidd by Maria Popova “Graphic design needs your willing mental participation, even if it’s subconscious.” “It doesn’t occur to most people that everything is designed — that every building and everything they touch in the world is designed,” the late and great Bill Moggridge, designer of the world’s first laptop, famously reminded us. And, indeed, it is precisely because design touches every aspect of our lives — from our cities to our books to our governance to our communication with objects — that we grow so blind to it and so oblivious to its all-permeating power.