The Anatomy of a Design Document, Part 1: Documentation Guidelines for the Game Concept and Proposal 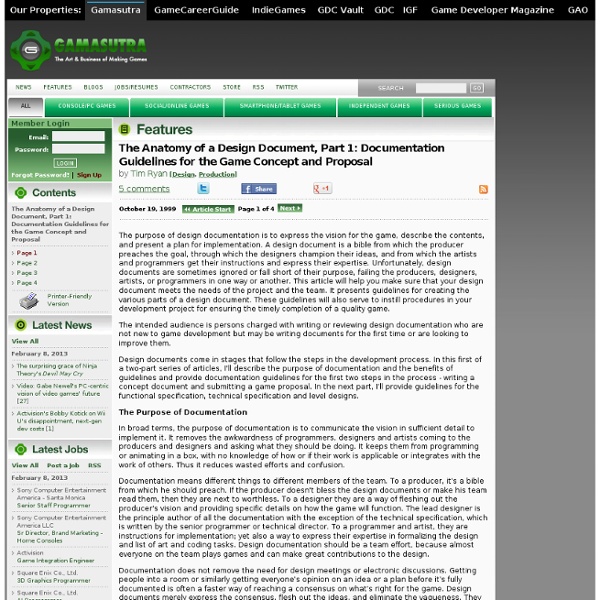 The Anatomy of a Design Document, Part 1: Documentation Guidelines for the Game Concept and Proposal The purpose of design documentation is to express the vision for the game, describe the contents, and present a plan for implementation. A design document is a bible from which the producer preaches the goal, through which the designers champion their ideas, and from which the artists and programmers get their instructions and express their expertise. Unfortunately, design documents are sometimes ignored or fall short of their purpose, failing the producers, designers, artists, or programmers in one way or another. This article will help you make sure that your design document meets the needs of the project and the team. The intended audience is persons charged with writing or reviewing design documentation who are not new to game development but may be writing documents for the first time or are looking to improve them. The Purpose of Documentation The Benefits of Guidelines Related:  GameDesign

Effectively Organize Your Game’s Development With a Game Design Document Have you ever dived right in to developing a game, but found yourself having to constantly change aspects of the design or the gameplay due to a lack of planning? You should consider using a game design document: a guiding vision of the game as a whole, pulling together ideas and plans for the design, development, and business sides of your game. Introduction To put it simply: we like to tell stories. And as the stories grew in complexity, so did the tools used in their making. Although video games were first just about getting the highest score possible when faced with a determined task, developers soon realized the endless possibilities laying ahead of them. A game has the potential to bond player and story in a way never seen before. Unfortunately, since a game is composed of so many different elements, different experts from different areas are required in its creation, making the coordination of the development process a rather tricky job. Overview Marketing High Concept Gameplay Art

Pixel Art Tutorial Stuart Lilford's Blog - 5 Common mistakes made by students making their first games and how to fix them The following blog post, unless otherwise noted, was written by a member of Gamasutra’s community. The thoughts and opinions expressed are those of the writer and not Gamasutra or its parent company. As a lecturer in game design I see and play a lot of student games. These are often the first games these students have ever made. I have seen some really talented students develop their first games and I’ve noticed a few recurring mistakes in some of their early work (even the really talented ones). Obviously everyone’s first few games are awful, mine own included (see: The Adventures of Turquoise Macdonald), but I believe that with a little sprinkle of polish over some of these areas, student games can overcome these common mistakes and their games could evolve from awful to almost-good. Every year I teach students how to make games and inevitable I am asked the question “how do I add a menu” or “how do I add pause functionality to the game”. Tutorials are a contentious subject.

Level 1: Intro to Game Balance « Game Balance Concepts Class Announcements I have to admit I was a little surprised to see that people were still signing up for the paid course after it started, but I suppose it’s common enough for people to join a class early in the term. However, to be fair to those who signed up well in advance, I’ll be closing signups this Sunday (July 10) at midnight EDT. So, if you haven’t signed up and still want in, make sure to click the Paypal link before then! Readings/Playings If you haven’t already, you should watch the intro video for this course first, before reading on. This Week’s Topic This week is probably going to start a bit slow for those of you who are experienced game designers (or those who are hoping to dive deep into the details). You can think of this week like a tutorial level. What is Game Balance? I would start by asking the question “what is game balance?” This immediately brings up the question: what if a game doesn’t have any numbers or math involved? How do you tell if a game is balanced?

I Have No Words & I Must Design This article was published in 1994 in Interactive Fantasy #2, a British roleplaying journal. A more recent version of the piece may be found here. There's a lotta different kinds of games out there. But do these things have anything at all in common? Well, we can all do the latter: "Good game, Joe," you say, as you leap the net. As game designers, we need a way to analyze games, to try to understand them, and to understand what works and what makes them interesting. We need a critical language. What Is a Game, Anyhow? It's Not a Puzzle. In The Art of Computer Game Design, Chris Crawford contrasts what he call "games" with "puzzles." Some puzzles are obviously so; no one would call a crossword a "game." To be sure, Zork is not entirely static; the character moves from setting to setting, allowable actions vary by setting, and inventory changes with action. A puzzle is static. It's Not a Toy. According to Will Wright, his Sim City is not a game at all, but a toy. Just so Sim City. Aha! Goals

Liz England's Blog - Types of Designers The following blog post, unless otherwise noted, was written by a member of Gamasutra’s community. The thoughts and opinions expressed are those of the writer and not Gamasutra or its parent company. “So who writes the story? In an effort to help clarify “what does a game designer do?” The truth is, any general definition of design has flaws because the actual responsibilities of a designer varies depending on the size of the studio, the platform, the genre, the size of the game, the studio culture regarding roles, how specialized people are, and even whether there is a “design department” at that studio. Designer / Game Designer Generic term to mean any or all of the design specializations, used at any size studio, any genre, etc. Overall, designers are concerned with the rules of the game, what ways a player can interact with the game, how the mechanics and story work to provide a desired experience to the player. Junior Designer / Associate Designer Senior Designer Lead Designer Writer

Our 10 Favorite Game Design Articles Game design is a unique combination of storytelling, engineering and art. Mastering game design can take a lifetime, so we wanted to jumpstart your education by putting together a guide of the 10 best game design articles we could find. Whether you are an industry expert or a complete beginner, all of these articles condense valuable lessons into a few short pages each. Design A Game: The Full Tutorial This eight-part forum post walks you through the basics of game design and distribution. Level Design Lessons from Super Mario Bros 3 Significant Bits, a blog by video game designer Radek Koncewicz, goes into detail about how SMB3′s game design made it so easy to pick up and play. Beginning Level Design, Part 1 This is a classic Gamasutra article from the way back machine: April 16th, 1999. Roger Dickey’s Hacks for Game Monetization We couldn’t help but include this awesome video that was taken from Roger Dickey’s presentation at our Game Monetization meetup. My Game Design Hat

Slaton White's Blog - Tools of a Game Designer: What I use and What is out There The following blog post, unless otherwise noted, was written by a member of Gamasutra’s community. The thoughts and opinions expressed are those of the writer and not Gamasutra or its parent company. There are a variety of ways to go about designing a game. Luckily enough I’ve had enough projects to work on and enough freedom to try different ways to design them. Some ways have completely failed me and others have shown real promise. Come up with the aesthetic(s)Find what dynamics support the aesthetic(s) Build mechanics that make the dynamics workUse iterative design to test how close my idea of the game is to the actual gameGo through the entire game with player empathy in mindSee what target market works best for the game Testing, testing, testing, and more testing Before you start building your game you need to decide what the mechanics, dynamics, and aesthetics (MDA) are. As a game designer, iterative design is my favorite method for solving problems and testing new ideas.