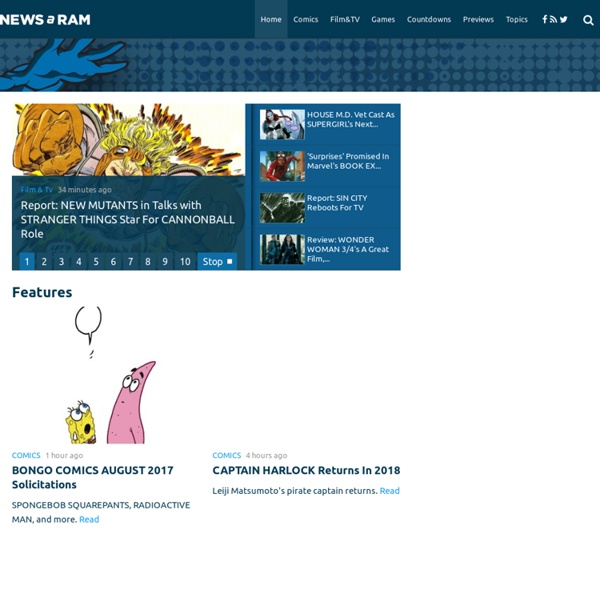 CAP learns the truth about the Illuminati and the Infinity Gauntlet in May's AVENGERS #29 and he won't be very happy. The Marvel Cinematic Universe is becoming that - a whole Universe - in this behind-the-scenes featurette of Guardians of the Galaxy. The final trailer for X-MEN: DAYS OF FUTURE PAST is here, revealing more about the story (oh, and more action, too!). We compile all the pertinent info, hints, and teases about Morrison's big DC epic from years of various interviews. We look back at the many different incarnations of Batman's sidekick, and picks the best from 10 to 1. A big comic book event usually means a big comic book character death, and here are 10 of the very biggest.

Secret Origin of Good Readers @ Night Flight Comics For questions, please email or phone manager, Mimi Cruz 801.532.1188 -or- 801.263.1940 Thanks to everyone who attended the Secret Origin of Good Readers panel at The City Library Comic Conference 2007 Comic Conference Jam print by Bill Galvan, Batton Lash, Bill Morrison & Trevor Nielson 2007 A copy of THE SECRET ORIGIN OF GOOD READERS: A Resource Book the 2004 updated version is available in PDF form. 17 Awesome Things To Do With The Ruby Programming Language Ready to try your hand at Ruby? Join the brand new Skillcrush 104 class: Create Your First Web App With Ruby. Learn Ruby, Sinatra, Command Line, Git & GitHub! Get started today. Comics Grammar and Tradition Comic Book Grammar & Tradition by Nate PiekosUpdated 2013 Special thanks to Todd Klein, Clem Robins, Scott Allie and Jason Arthur for their time and contributions. Comic book lettering has some grammatical and aesthetic traditions that are unique. What follows is a list that every letterer eventually commits to his/her own mental reference file. The majority of these points are established tradition, sprinkled with modern trends and a bit of my own opinion having lettered professionally for a few years now.

Free Online Comic Books Two of the greatest obstacles that comics have in reaching readers are exposure and cost. Fortunately, the internet has provided remedies for both. Many comic book creators and publishers have put their comics online, available as full issues and at absolutely no cost to the reader. And unlike torrents or scanned files, these comics are completely legal. Heroes N Hunks The BLOG is back!!! Hi and welcome to HeroesNHunks. I’ve been away from the blog for awhile, but I’m back a bit early because I appreciate the comments. I hope your enjoy my new articles as well as the extensive older archives. Kids Graphic Novels When we saw a picture of the new children’s graphic novel collection at the Alameda Free Library in Alameda, California in a tweet from Supervising Children’s Librarian (and ICv2 reviewier) Eva Volin, it looked to us like the kind of place where new comic readers were being created on a regular basis. We were intrigued and asked for more information. Here are Volin’s answers, giving some great info on the kids’ graphic novel collection and how it’s developed.

Webcomics « Viper Comics Kung Fu Bean Kung Fu Bean is a web comic following the journey of a smart-mouthed and adventure chasing bean. KFB finds himself fighting alongside the most unlikely of allies, Tank and X5. Their journey will take them to fantastical places in this no-stop, ongoing saga.

Moore & Nicieza Lead "JLA/The 99" Felipe Massafera covers "JLA/The 99" #1 This October, worlds will collide when writers Stuart Moore and Fabian Nicieza bring together for the first time ever DC Comics and the Middle Eastern publishing company Teshkeel Comics for the six-issue crossover miniseries "JLA/The 99." While many comic fans know of the Justice League - with a roster reaching all areas of the DCU and consisting of such powerhouses as Superman, Batman and Wonder Woman - they may not be as familiar with Teshkeel and The 99.

Comics Make the Grade and Get the Cover The cover for the May/June issue of The Scholastic Instructor, “the most read, most valued, and most trusted K-8 professional educator magazine,” features the gang from Archie Comics and a comics-friendly message that reading comics is “actually a good thing.” The cover article by Samantha Cleever goes on to point out that “comics and their generally more complex, nuanced cousins graphic novels, are not only regarded as educational tools by savvy teachers, they are also taken seriously as literature and an art form in their own right.”