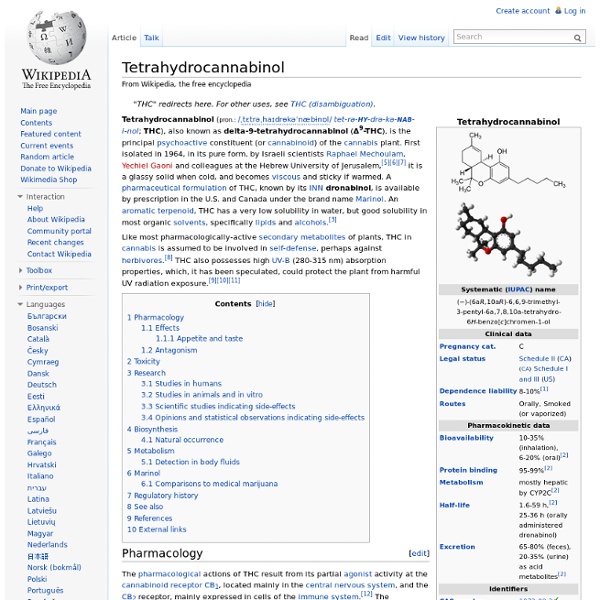 Tetrahydrocannabinol (THC), or more precisely its main isomer (−)-trans-Δ9-tetrahydrocannabinol ( (6aR,10aR)-delta-9-tetrahydrocannabinol), is the principal psychoactive constituent (or cannabinoid) of the cannabis plant. First isolated in 1964, in its pure form, by Israeli scientists Raphael Mechoulam and Yechiel Gaoni at the Weizmann Institute of Science,[8][9][10] it is a glassy solid when cold, and becomes viscous and sticky if warmed. A pharmaceutical formulation of (−)-trans-Δ9-tetrahydrocannabinol, known by its INN dronabinol, is available by prescription in the U.S. and Canada under the brand name Marinol. An aromatic terpenoid, THC has a very low solubility in water, but good solubility in most organic solvents, specifically lipids and alcohols.[6] Tetrahydrocannabinol with double bond isomers and their stereoisomers is one of only three cannabinoids scheduled by Convention on Psychotropic Substances (the other two are dimethylheptylpyran and parahexyl). Pharmacology[edit] Related:  Psychoactive Alkaloids

Anandamide §History[edit] Anandamide was isolated and its structure first described in 1992 by W. A. Devane, Lumír Hanuš et al. who were working in a team led by Raphael Mechoulam at the Hebrew University of Jerusalem.[1] §Physiological functions[edit] Anandamide has been shown to impair working memory in rats.[7] Studies are under way to explore what role anandamide plays in human behavior, such as eating and sleep patterns, and pain relief. Anandamide is also important for implantation of the early stage embryo in its blastocyst form into the uterus. Anandamide plays a role in the regulation of feeding behavior, and the neural generation of motivation and pleasure. A study published in 1998 shows that anandamide inhibits human breast cancer cell proliferation.[12] Some studies have linked anandamide release as a mechanism of analgesic effects induced by exercise, particularly by running.[13] In 1996, researchers discovered anandamide in chocolate. §Synthesis and degradation[edit] §See also[edit]

Tetrahydrocannabinol Tetrahydrocannabinol (THC) is the active chemical in cannabis and is one of the oldest hallucinogenic drugs known. There is evidence that cannabis extracts were used by the Chinese as a herbal remedy since the first century AD. Cannabis comes from the flowering tops and leaves of the hemp plant, Cannabis sativa (shown in the picture on the right). Cannabis contains approximately 60 different psychoactive chemicals called cannabinoids, of which the most important one is tetrahydrocannabinol (THC). The cannabinoids belong to a class of chemicals called terpenoids, meaning terpene-like. THC as an Illegal Drug The cannabinoids are basically non-polar molecules, with low solubility in water, so they are normally self-administered by smoking. Medical Uses Apart from the recreational uses and abuses, THC does have some medical uses. References: Organic Chemistry, Morrison and Boyd (Allyn and Bacon, 1983).

Psilocybin Psilocybin[nb 1] (/ˌsɪləˈsaɪbɪn/ SIL-ə-SY-bin) is a naturally occurring psychedelic compound produced by more than 200 species of mushrooms, collectively known as psilocybin mushrooms. The most potent are members of the genus Psilocybe, such as P. azurescens, P. semilanceata, and P. cyanescens, but psilocybin has also been isolated from about a dozen other genera. As a prodrug, psilocybin is quickly converted by the body to psilocin, which has mind-altering effects similar (in some aspects) to those of LSD, mescaline, and DMT. In general, the effects include euphoria, visual and mental hallucinations, changes in perception, a distorted sense of time, and spiritual experiences, and can include possible adverse reactions such as nausea and panic attacks. History[edit] Early[edit] Modern[edit] Albert Hofmann (shown here in 1993) purified psilocybin and psilocin from Psilocybe mexicana in the late 1950s. Occurrence[edit]

Cannabis Vault : Chemistry Cannabis Chemistryby Erowid THC Material Safety Data Sheet (Occupational Health Services) Tropane alkaloid Tropane alkaloids are a class of bicyclic [3.2.1] alkaloids and secondary metabolites that contain a tropane ring in their chemical structure. Tropane alkaloids occur naturally in many members of the plant family Solanaceae. Some tropane alkaloids have pharmacological properties and can acts as anticholinergics or stimulants. Anticholinergics[edit] Anticholinergic drugs and deliriants: All three acetylcholine-inhibiting chemicals can also be found in the leaves, stems, and flowers in varying, unknown amounts in Brugmansia (Angel Trumpets or Devil's Weed), a relative of Datura. Stimulants[edit] Stimulants and cocaine-related alkaloids: Cocaine, from Erythroxylum cocaEcgonine, a precursor and metabolite of cocaineBenzoylecgonine, a metabolite of cocaineHydroxytropacocaine, from Erythroxylum cocaMethylecgonine cinnamate, from Erythroxylum coca Others[edit] Non-natural tropanes[edit] There exist some synthetic analogs of tropane alkaloids, see Phenyltropanes See also[edit]

The Endocannabinoid System: An Osteopathic Perspective The endocannabinoid system was discovered long after the endorphin system, which was indirectly detected in 1801 when morphine sulfate was isolated from opium. Morphine's mechanism of action remained a mystery until the opioid μ receptor was identified. That discovery begged the question: Why do humans express a receptor for an opium poppy (Papavera somniferum) plant compound? In 1897, Andrew Taylor Still, MD, DO,2 the founder of osteopathic medicine, famously stated, “Man should study and use the drugs compounded in his own body.” Since then, research—particularly osteopathic medical research—has redirected its attention from the endorphin system to the endocannabinoid system.4-10 A search on the National Library of Medicine's PubMed database of endorphin in the 1992 literature, the year endocannabinoids were discovered, returns 596 citations, whereas endocannabinoid yields only two citations. Exogenous Cannabinoids Animal studies of THC began immediately after its discovery. Figure 1.

Nicotine In smaller doses (an average cigarette yields about 1 mg of absorbed nicotine), the substance acts as a stimulant in mammals, while high amounts (50–100 mg) can be harmful.[5][6][7] This stimulant effect is likely to be a major contributing factor to the dependence-forming properties of tobacco smoking, nicotine patches, nicotine gum, nicotine inhalers and liquid nicotine vaporizers.[citation needed] According to the American Heart Association, nicotine addiction has historically been one of the hardest addictions to break, while the pharmacological and behavioral characteristics that determine nicotine addiction are similar to those determining addiction to heroin and cocaine. The nicotine content of popular American-brand cigarettes has slowly increased over the years, and one study found that there was an average increase of 1.78% per year between the years of 1998 and 2005. Psychoactive effects[edit] Medical uses[edit] A 21 mg patch applied to the left arm. Side effects[edit]

Melatonin Melatonin The hormone can be used as a sleep aid and in the treatment of sleep disorders. It can be taken orally as capsules, tablets, or liquid. It is also available in a form to be used sublingually, and there are transdermal patches. Discovery[edit] Biosynthesis[edit] Melatonin biosynthesis involves four enzymatic steps from the essential dietary amino acid tryptophan, which follows a serotonin pathway. In bacteria, protists, fungi, and plants melatonin is synthesized indirectly with tryptophan as an intermediate product of the shikimic acid pathway. Regulation[edit] In vertebrates, melatonin secretion is regulated by norepinephrine. It is principally blue light, around 460 to 480 nm, that suppresses melatonin,[24] proportional to the light intensity and length of exposure. Animals[edit] In vertebrates, melatonin is produced at nighttime by the pineal gland, a small endocrine gland[30] located in the center of the brain but outside the blood–brain barrier. Plants[edit] Functions[edit]

Science for potheads: Why they love to get high Drug warriors have long tried to smear marijuana as a dangerous scourge, seeking to criminalize possession of a leaf they clearly do not understand. The key to comprehending its effects is by better grasping our physiology. Marijuana is not magic. Marijuana (botanical name, cannabis) affects the human body because the plant-based cannabinoids in marijuana, once ingested, can “plug into” the cannabinoid receptors that are used by the cannabinoids made by our own bodies. It’s not just people that have cannabinoid systems. Evolution has selected for cannabinoid systems, meaning once they emerged, they were retained, and broadly adopted. The cannabinoid receptor seems to have first appeared approximately 600 million years ago in sea squirts. A sea squirt is a tunicate, and tunicates contain a host of potentially useful chemical compounds that are effective against various types of cancer. Could that underlying mechanism allowing for “reprogramming” involve the cannabinoid system?