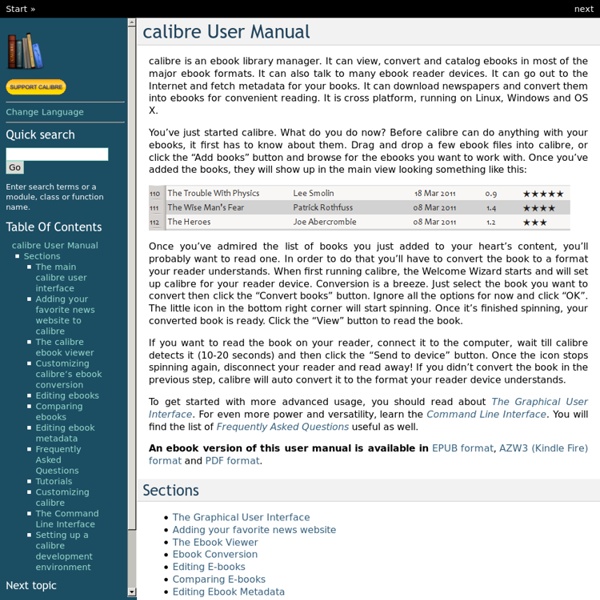 calibre is an ebook library manager. It can view, convert and catalog ebooks in most of the major ebook formats. It can also talk to many ebook reader devices. It can go out to the Internet and fetch metadata for your books. It can download newspapers and convert them into ebooks for convenient reading. It is cross platform, running on Linux, Windows and OS X.

Microsoft To ARM Win8 Tablet Makers: No Dual Boot For You This may seem a bit of inside baseball, but it’s a fairly interesting fact for folks looking forward to thin-and-light Win8 devices running ARM chips rather than Intel. According Computer World, devices running ARM versions of Win8 will not be able to run other OSes, like Android, thanks to something called Secure Boot. A version of Secure Boot is built into many mobile devices – namely phones and tablets – in order to avoid bootloader mobile attacks and, obviously, to keep things locked down. Windows Phone, for example, prevents folks from installing anything into the bootloader nor can they run off-brand software. Syncing your own eBooks between PCs and Android [Archive] Sorry to add to an old thread, but I see this one ends unanswered. I've sync hundreds of my calibre ebooks with my Kindle (1 device, 4 android, 1 iPad) and I use a slightly different route. I know calibre has a device sync option, but honestly I never used it. I use the "my own document archive" capability of kindle to read documents I generated and store it in the cloud. Then each of the kindle I have (for the family) can download just the books they want to read.

How to watch Netflix (Watch Instantly) in Linux With Ubuntu 14.04 and Chrome 37 onwards, playing Netflix on Linux natively is now possible thanks to Encrypted Media Extensions and co-operation between Canonical and Netflix. The instructions below are legacy instructions for running Silverlight on Linux via Wine. However, running Netflix is entirely possible in Ubuntu Linux 12.04 and later releases (and most likely any other modern distribution). See the section below "Running with Wine". Until recently there was no simple solution to watching streaming movies via Netflix (Watch Instantly) in Linux for any Linux distros besides Android based computers. This is because they use Microsoft Silverlight plugin with DRM.

Mount USB Devices in Virtualbox with Ubuntu Mounting a USB device inside a virtual machine is often a tool that you cannot go without. If you are using Virtualbox in Ubuntu however, you need to take a few extra steps to make it work. Install Virtualbox The first thing you need to do is install Virtualbox from Oracle’s website. Software gives visual representation of who’s following you online By Stephen C. WebsterThursday, March 1, 2012 11:08 EDT A new piece of software released this week by browser-maker Mozilla does something unique: it provides a real-time visualization of who is tracking your movements online. The software is called “Collusion,” developed last year by Mozilla programmer Atul Varma, who became inspired to code the program after reading extensively about online privacy matters. It plugs into the Firefox browser and watches as websites and ad networks drop “cookies” into the browser during normal surfing.

Best Ebook Readers for Android Tablets I used to read a lot of paper books. Now I get annoyed when publishers insist on sendng me paper versions of their books. Ebooks are simply more convenient, easier to use, and easier to carry. There is a problem with battery life, but I've yet to be stuck without a charger for long enough to make it an issue. Editions at Play What is Editions At Play? Editions At Play is an initiative by Visual Editions and Google’s Creative Lab to explore a new kind of book: one which makes use of the dynamic properties of the web. Do you want to expand on that a bit? EBook Readers Vs Tablet PC's - Kindle,iPad vs Tablet Pcs Introduction The rapid pace of technological innovation is leaving us breathless (not to mention Bankrupt!!!) with manufacturers coming out with an amazing array of Gadgets like eBook readers, Tablet PC's, 3D Smart Phones etc leaves us utterly confused as to what should be bought?