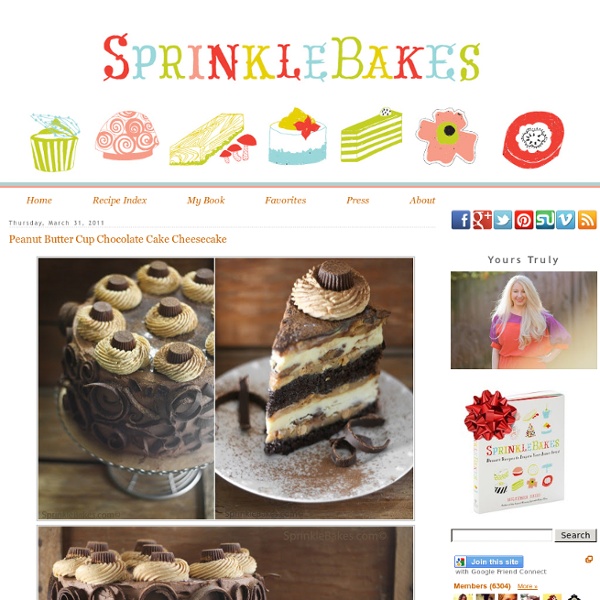 Last week I got an email from a kind reader asking if I would consider developing a recipe for one of her favorite "factory-made" desserts. The minute I clicked the link she provided, I knew I wanted to make her cheesecake dreams come true. I had concerns about how this cake would translate to real world baking. No doubt it is mass-produced with industrial equipment since it is sold nationwide at a popular restaurant chain. I knew I would have to simplify each of the recipe's elements and keep the baking equipment simple. One other thing. Of course, the chocolate curls are optional, but just in case you want to make them I'm including a how-to video for them in this post. Below are many of the steps illustrated in pictures. The recipe has notes that correspond with the numbered pictures. Peanut Butter Cup Chocolate Cake Cheesecake Serves 500 15-20 at least [click to print] Note: Plan ahead, this cake should be made over the course of 2-3 days. Preheat oven to 325 degrees. Notes:

S'mores Cookies These cookies are every bit as delicious as they look. You may have noticed that I have been in a s'mores kick lately. First with the cookie dough pops, then with these cookies. I also plan to make additional s'mores themed treats this weekend. I saw a version of s'mores cookies on Make and Bake and became immediately intrigued. I knew I had to try to make these...the sooner the better. S'mores Cookiesadapted from Make and Bake 1 1/2 cups all purpose flour1 cup graham cracker crumbs 1 teaspoon baking soda 1 teaspoon salt 1 dash of cinnamon 1 cup (2 sticks) butter, softened 3/4 cup sugar 3/4 cup brown sugar 1 teaspoon vanilla extract 2 eggs 2 cups miniature chocolate chips1 1/2 cups mini marshmallows2 Hershey bars, choppedPreheat oven to 375 degrees. In a medium bowl combine the flour, graham cracker crumbs, baking soda, salt, and dash of cinnamon. Makes approximately 4 dozen cookies.

Cinnamon Toast Rolls The USDA released its new food pyramid the other day (which is actually a plate now instead of a pyramid), and I am sorely disappointed to report that cinnamon rolls did not appear anywhere on that plate. I think by now most of us know what should be on our dinner plate in terms of healthy, well-rounded nutrient-laden meals, but it is my considered opinion that our breakfast plate should include cinnamon rolls now and then. And not just any cinnamon roll, mind you, but how ‘bout a homemade cinnamon roll hybrid that is a cross between a cinnamon roll and cinnamon toast, is super easy to make and gosh darn delicious. In honor of their ancestry, I call these little gems cinnamon toast rolls, and here’s all you need to make them… Yep. That’s it… some soft white bread, some butter and some cinnamon sugar. Trim the crusts off of the bread Roll the bread really flat Brush both sides of the bread with butter Sprinkle with cinnamon sugar Cinnamon Toast Rolls Click here for a printable recipe

Seven promising jobs for 2012 Prospects for employment in the realm of information technology continue to look strong in 2012 for Canadians as companies invest more of their time and money into their digital presence, according to Robert Half International. The staffing firm has come up with a list of seven occupations expected to be in particular demand in the new year, along with the corresponding salary potential. “Many of these roles are quite challenging for employers to fill, since, in some cases, the demand for qualified professionals exceeds the supply,” Lara Dodo, a Canadian regional vice president of Robert Half Technology, said in a media release issued by the company. The list includes: Foursquare Checkins Reveal Holiday Travel Patterns [INFOGRAPHIC] Click image to enlarge. In honor of Thanksgiving travel, Foursquare has posted an infographic on the company's blog showing checkins related to travel in the United States by plane, train, and automobile, covering a period from Halloween until just after Christmas in 2010. For airplane and train travel, data is pulled when someone checks in on Foursqure at two different airports or train stations in the same day. There's also a timeline component showing the peaks and lulls of travel around Thanksgiving and Christmas, some of the busiest travel times of the year. While the graphic doesn't offer numbers of checkins or users, it appears that the highest number of people checking in are flying, though railway travel is consolidated to very specific parts of the country.

Social Media Marketing - 10 Inspiring Infographics In 2011 social media marketing continued to make its impact on business and brand promotions. Google+ was launched (with an investment of over $500 million in development costs), Twitter became embedded in the new Apple iPhone 4s and Blogging didn’t die. Facebook soared past 800 million users and Twitter continued its upward trajectory past 200 million members. The world’s obsession with anything social online has given marketers access to networks that are instant in response, multi-media rich and ever challenging. Some Social Network Surprises Some surprising results and unexpected networks and social media platforms have made their mark this year . Tumblr is now attracting over 90 million unique visitors every monthStumbleUpon driving over 50% of all social network trafficYouTube is attracting 50% more views than 2010 and threatening traditional TV advertising and marketing 1. Via: Online Schools 2. 3. 4. 5. 6. 7. 8. 9. 10. Read More Image by BirgerKing 1,241inShare

5 Simple Ways To Increase Your Klout [Infographic] The measure of how influential you are on the web used to be measured by how many fans or followers you had. Today it’s measured by Klout—the standard for online influence on a scale of 1 to 100 by Klout.com that factors in elements such as how many people you influence and how much of an impact you make on your fans and followers. Don’t know much about Klout? A new infographic from KISS Metrics is a one-stop-shop for everything you need to know about how online influence is measured and how to increase your Klout. ‘Got Klout?’ 1. 2. 3. 4. 5. Check out the full infographic below for more and let us know what you think. ++ Click Image to Enlarge ++ Source: Got Klout? Megan O’Neill is the resident web video enthusiast here at Social Times.

I love the Sprinkle Bakes Blog! Everything looks so delicious especially this peanut butter cup chocolate cake cheesecake. I am looking forward to the day I get to try to make this lovely dessert! by ashleyc Apr 10