The Salem Witchcraft Trials of 1692 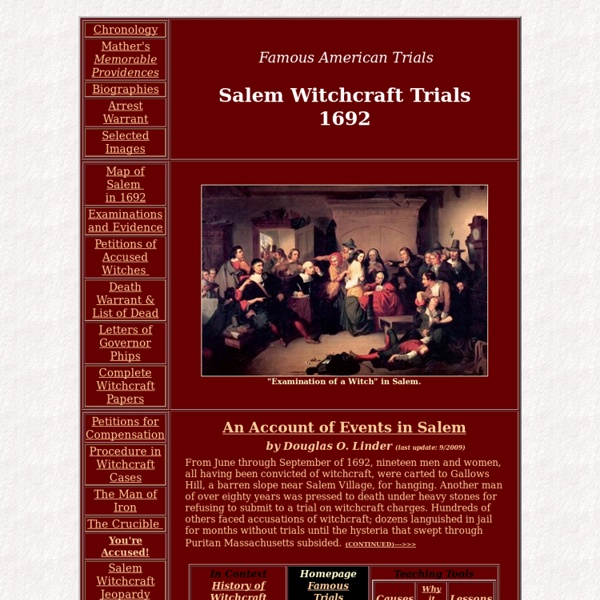 Essex Witch Trials The Voices of Demons: The True History of The Necronomicon | The Blood Sprayer Necronomicon ex Mortis. The Book of the Dead. Bound in human flesh and inked in blood, this ancient Sumerian text contained bizarre burial rights, funeral incantations, and demon resurrection passages; it was never meant for the world of the living. With these words in the opening sequence of ARMY OF DARKNESS, Ash Williams (Bruce Campbell) described the most famous book of evil of all time. Prologue Providence, Rhode Island, around 1896, 1897. Lovecraft In 1921, his career as a writer of weird and fantastic fiction beginning to blossom, Lovecraft (long since outgrown the bed sheet) drew upon those childhood adventures, quoting Abdul Alhazred, now “the Mad Arab,” with the “much-discussed couplet”: That is not dead which can eternal lie, and with strange eons even death may die. A year later, in 1922, Lovecraft penned a short story, “The Hound,” about a pair of decadent grave-robbing aesthetes. Translations For the more visually-inclined, H.R. From Book to Film The EVIL DEAD trilogy.

Hearth and Home Witchery Imbolg Crafts and Activities for Children There are so many activities to do with your young ones at Oimelc, many of which can also be done at the Spring Equinox. Older children can help make candles (there are lots of kits out there to make it easier) and candle holders. Younger children can make "candles" from toilet paper rolls and construction paper. If you choose to start your Spring Cleaning, a small brush broom and dustpan, a clean cloth to help wipe down cabinet doors or dust tables or child size cleaning equipment for those little "can I help?" Make a Priapic Wand ~Reading~ Meagan's Imbolc by Kathryn Dyer The Story of Imbolc by Rachel Walker Making Butter In a clean jar with a screw on top pour in heavy or whipping cream. Paper Brigid's Crown An Imbolc Project By Wendy Sheridan (This is especially appropriate for young girls, since this is the holiday for the return of the maiden). You will need: Cut a strip of paper about 2 inches wide and long enough to wrap around your child's head.