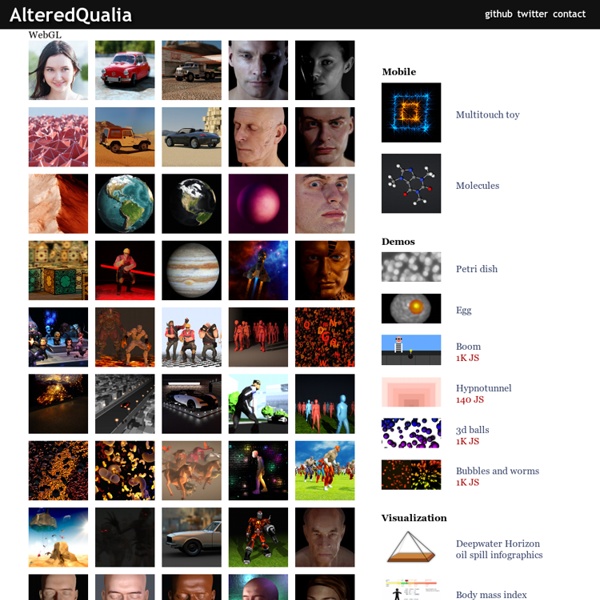 WebGL Inspector An advanced WebGL debugging toolkit About WebGL Inspector is a tool inspired by gDEBugger and PIX with the goal of making the development of advanced WebGL applications easier. What Firebug and Developer Tools are to HTML/JS, WebGL Inspector is to WebGL. Note: this is alpha software - if you find bugs, let me know (or better yet, fork and fix them! Check out the readme on github for more information. Status There hasn't been an update in awhile, but the project is not dead! Features Extension for injecting into pages Embed in an existing application with a single script include Capture entire GL frames Annotated call log with stepping/resource navigation and redundant call warnings Pixel history - see all draw calls that contributed to a pixel + blending information GL state display Resource browsers for textures, buffers, and programs Live Demo Click here to view a live demo (in a browser that supports WebGL, of course): Install ATTENTION: The extension is now hosted on the Chrome Web Store.

GLSL 1.2 Tutorial In this tutorial shader programming using GLSL 1.2 will be covered. Although many parts are now considered deprecated, the essence of GLSL has remained constant. Besides, this tutorial will continue to be online because learning the basics of deprecated OpenGL is easier than learning the new versions. If you’re looking for a GLSL tutorial that deals only with non-deprecated features visit the GLSL Core tutorial, here in Lighthouse3D. Shaders are a hot topic and 3D games have shown that they can be put to good use to get remarkable effects. The tutorial contains an introduction to the specification, but reading the OpenGL 2.0 and GLSL official specs is always recommended if you get serious about this. GLSL stands for GL Shading Language, often referred as glslang, and was defined by the Architectural Review Board of OpenGL, the governing body of OpenGL. I won’t go into disputes, or comparisons, with Cg, Nvidia’s proposal for a shading language that is also compatible with OpenGL. Index

uncontrol | A collection of experiments using fancy shmancy code Free 3D Models, Free CAD Models Host your 3D printer projects. Version control included. Voidworld Reconstruct your world with ReconstructMe Blender 2.67 RC1 and DVD Training Blender for 3D Printing Released | 3D Printer April 28, 2013 Open-source 3D creation suite Blender has released the first Release Candidate of Blender 2.67. Major improvements are the inclusion of FreeStyle, subsurface scattering for Cycles, optimizations in the motion tracker and the new 3D printing toolkit. The new 3D printing toolkit is a collection of useful tools including statistics, error checking, cleanup and export, to make it easier to export models for 3D printing. Statistics: The volume of the mesh and the combined area of all faces are calculated. Checks: models are checked for common errors such as self-intersections, distorted faces, or walls and sharp area that are too thin to be printed, or steeply overhanging to print safely. example of intersecting meshes Twisted faces often distort Example mesh with thin areas Example of overhanging faces that exceed 45 degrees Clean: isolated faces, edges vertices and distorted faces are removed before the model is exported for 3D printing.

Google © 2021 - Privacy - Terms Softimage Software Features We regret to inform you that the upcoming 2015 release will be the last one for Softimage® software. This final version is expected to ship on or around April 14, 2014. Autodesk will continue to offer product support until April 30, 2016. We will also provide Softimage support services (including Hot Fixes and Service Packs) to all Softimage customers with Autodesk Subscription, at no cost, until April 30, 2016. We understand that you will now need time to re-evaluate your production capabilities. Although this decision is a difficult one, we do believe that by focusing our development efforts, we can better serve the needs of the media and entertainment industry and provide customers with better products, faster. What is happening to Softimage? Softimage Last Release Announcement FAQ - Update Customers with an active Autodesk Softimage Subscription contract can migrate to the latest release of either Maya or 3ds Max, at no additional cost.

25 (Free) 3D Modeling Applications You Should Not Miss 3D-modeling tools help turn individual ideas into beautiful models and prototypes for a variety of fields. These tools allow building and customizing models from the ground up, no matter if you are a keen beginner or a professional engineer. Popular in various industries such as film, animation, gaming, architecture, and interior design, 3D models are key aspects of various projects. Choosing the best modeling software is often difficult because of various aspects and the wide range of features available in these tools. Read more: 25 Websites to Download 3D Printer STL Models Wings 3D Wings 3D is an advanced sub-division modeler which offers a wide range of modeling tools and a customizable interface, along with a built-in AutoUV mapping tool, as well as export facility for common 3D formats. Supported Platforms: Windows | macOS | Linux [Download here] Daz Studio Supported Platforms: Windows | macOS [Download here] Open SCAD Supported Platforms: Windows | macOS | Linux | BSD [Download here]

Sculptris Sculptris Requirements Sculptris is hardware rendered. More powerful graphics cards will yield a more fluid sculpting experience. Please ensure that your video card drivers are up to date by visiting the chipset manufacturer's website. Windows Operating System: Windows XP SP2/Vista/Seven. Mac OSX Operating System: Mac OS X 10.5/10.6. Sculptris Artist: Raden Slipicevic Take your art to the next level With its simple interface and focused toolset, Sculptris provides an excellent gateway into the exciting world of 3D. Pixologic ZBrush 4R6 for Windows Single-user Commercial License (CD) | Graphics and Design Software ZBrush is a digital sculpting and painting program that has revolutionized the 3D industry with its powerful features and intuitive workflows. Built within an elegant interface, ZBrush offers the world’s most advanced tools for today’s digital artists. With an arsenal of features that have been developed with usability in mind, ZBrush creates a user experience that feels incredibly natural while simultaneously inspiring the artist within. With the ability to sculpt up to a billion polygons, ZBrush allows you to create limited only by your imagination. Designed around a principle of circularity, the menus in ZBrush work together in a non-linear and mode-free method. ZBrush gives you all of the tools needed to quickly sketch out a 2D or 3D concept and then take that idea all the way to completion. Because ZBrush users are enabled by its powerful software processing, you can sculpt and paint with millions of polygons with out having to worry about purchasing expensive graphics cards.