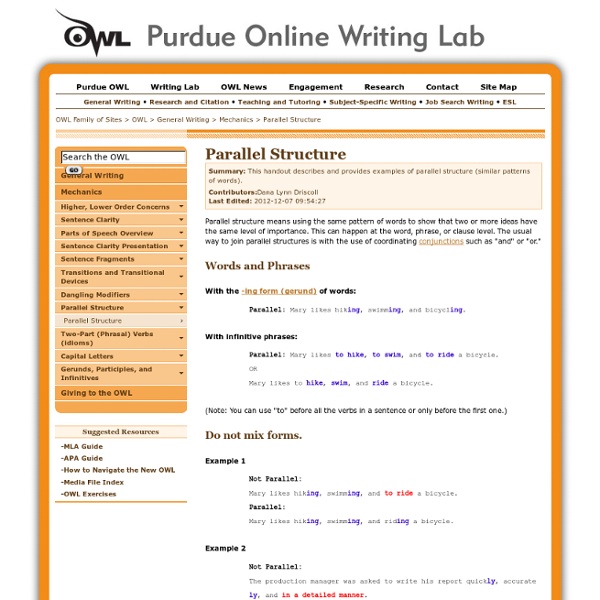 Summary: This handout describes and provides examples of parallel structure (similar patterns of words). Contributors:Dana Lynn DriscollLast Edited: 2013-03-22 09:01:32 Parallel structure means using the same pattern of words to show that two or more ideas have the same level of importance. This can happen at the word, phrase, or clause level. The usual way to join parallel structures is with the use of coordinating conjunctions such as "and" or "or." Words and Phrases With the -ing form (gerund) of words: Parallel: Mary likes hiking, swimming, and bicycling. With infinitive phrases: Mary likes to hike, to swim, and to ride a bicycle. (Note: You can use "to" before all the verbs in a sentence or only before the first one.) Do not mix forms. Example 1 Not Parallel: Mary likes hiking, swimming, and to ride a bicycle. Parallel: Mary likes hiking, swimming, and riding a bicycle. Example 2 Not Parallel: The production manager was asked to write his report quickly, accurate ly, and in a detailed manner.

Subject/Verb Agreement Summary: Ever get "subject/verb agreement" as an error on a paper? This handout will help you understand this common grammar problem. Contributors:Joshua M. Paiz, Chris Berry, Allen BrizeeLast Edited: 2014-04-01 10:34:43 This handout gives you several guidelines to help your subjects and verbs agree. 1. She and her friends are at the fair. 2. The book or the pen is in the drawer. 3. The boy or his friends run every day. His friends or the boy runs every day. 4. He doesn't like it. They don't like it. 5. One of the boxes is open The people who listen to that music are few. The team captain, as well as his players, is anxious. The book, including all the chapters in the first section, is boring. The woman with all the dogs walks down my street. 6. Each of these hot dogs is juicy. Everybody knows Mr. Either is correct. 7. The news is on at six. Note: the word dollars is a special case. Five dollars is a lot of money. Dollars are often used instead of rubles in Russia. 8. These scissors are dull. 9. 10. 11.

20 Common Grammar Mistakes That (Almost) Everyone Makes I’ve edited a monthly magazine for more than six years, and it’s a job that’s come with more frustration than reward. If there’s one thing I am grateful for — and it sure isn’t the pay — it’s that my work has allowed endless time to hone my craft to Louis Skolnick levels of grammar geekery. As someone who slings red ink for a living, let me tell you: grammar is an ultra-micro component in the larger picture; it lies somewhere in the final steps of the editing trail; and as such it’s an overrated quasi-irrelevancy in the creative process, perpetuated into importance primarily by bitter nerds who accumulate tweed jackets and crippling inferiority complexes. But experience has also taught me that readers, for better or worse, will approach your work with a jaundiced eye and an itch to judge. While your grammar shouldn’t be a reflection of your creative powers or writing abilities, let’s face it — it usually is. Who and Whom This one opens a big can of worms. Which and That Lay and Lie Moot Nor

Comics :: Grammar This is a grammar comic about the proper usage of who versus whom. A look at the meaning of "flushing out an idea." This comic will LITERALLY make butterflies explode out of your underpants. A guide explaining when to use i.e. instead of e.g. A little bit ironic, dontcha think? The right way to use an apostrophe (in illustrated form). All artwork and content on this site is Copyright © 2016 Matthew Inman. English Grammar, Vocabulary, Pronunciation Exercises for ESL Teachers and Students 10 Words You Need to Stop Misspelling A Picture of Language Joe Mortis Draft is a series about the art and craft of writing. The curious art of diagramming sentences was invented 165 years ago by S.W. Clark, a schoolmaster in Homer, N.Y. [1] His book, published in 1847, was called “A Practical Grammar: In which Words, Phrases, and Sentences Are Classified According to Their Offices and Their Various Relations to One Another.” His goal was to simplify the teaching of English grammar. It may have been unwieldy, but this formidable tome was also quite revolutionary: out of the general murk of its tiny print, incessant repetitions, maze of definitions and uplifting examples emerged the profoundly innovative, dazzlingly ingenious and rather whimsical idea of analyzing sentences by turning them into pictures. Before diagramming, grammar was taught by means of its drabber older sibling, parsing. Let’s say a teacher assigns a student the sentence “Virtue secures happiness”—a likely specimen in 1847. Parsing was almost insufferably tedious. Mr. Mr.