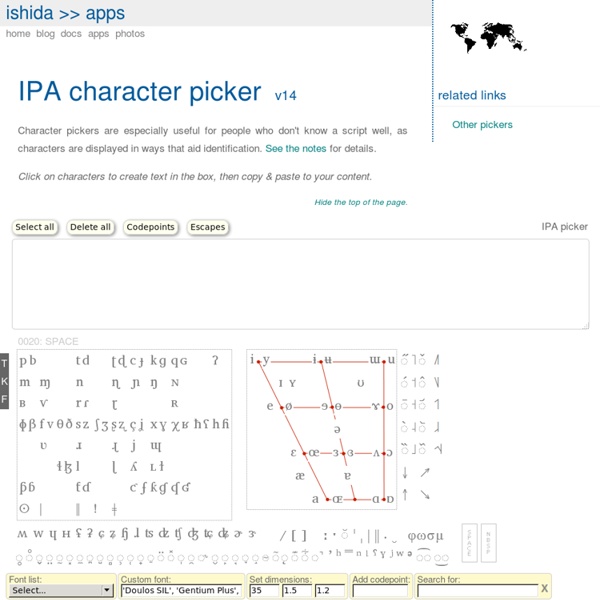 IPA You are here: Type Design > Resources > IPA Short URL: Introduction Font Home Pages Unicode-encoded Fonts Legacy Fonts Other IPA Resources IPA Unicode codepoints IPA Unicode Keyboards IPA Character Picker Utility IPA Typing Assistant Conversion to Unicode SIL IPA93 SIL IPA (1990) Amer Phon SILDoulos font IPA-SAM phonetic fonts Pitch Contours and Tone in Unicode Related Links Page History Introduction SIL International has produced several font sets over the years that allow for the transcription of linguistic data using the International Phonetic Alphabet. In general, SIL recommends the use of the Unicode-encoded fonts. Facilitates sharing your data files and archiving your data for future generations. Having said that, there are certain special cases that may warrant the use of the legacy fonts: Below, we provide a brief discussion of the issues related to the use of each of the above-mentioned fonts. Font Home Pages Unicode-encoded Fonts Legacy Fonts

Linguistics Handbook Cambridge University Press (1999) The Handbook of the International Phonetic Association was published by Cambridge University Press in July of 1999 and is being regularly reprinted in both hardback and paperback. The audio recordings contained here are the words and text that appear in the illustrations contained in Part 2 of the Handbook and which demonstrate the application of the International Phonetic Alphabet to a wide variety of sound systems of languages of the world. The zipped* folders of audio files (as well as PDF* files containing revisions or other information) are available for downloading individually by language here. The files of recorded words in each language folder are cross-platform wav files, designed for use in classroom teaching, in phonetics or language laboratories, or for private study. For further information on the IPA, its organization and activities, contact: Dr.

IPA: Sounds Handbook of the IPA: Sound Recordings The audio files to accompany the language Illustrations in Part 2 of the Handbook of the IPA may be downloaded from the Editor’s web site at the University of Victoria. Click here. The site consists of a large set of .WAV files organized into folders according to language, a few text files containing revisions and additions to some of the Illustrations, graphics files of IPA charts for printing, and an explanation of the site. The language folders may be downloaded individually or as a single "IPA Handbook" folder whose size is approximately 93MB. The .WAV files in each language folder are arranged according to the headings of each Illustration in the book and are named according to the English gloss of each item. Once downloaded, the files can be stored on individual computers and accessed as a database for playback. JIPA Illustrations of the IPA: Sound Recordings Audio Cassette and CD of Sounds

The sounds of English and the International Phonetic Alphabet | Antimoon.com © Tomasz P. Szynalski, Antimoon.com This chart contains all the sounds (phonemes) used in the English language. For each sound, it gives: The symbol from the International Phonetic Alphabet (IPA), as used in phonetic transcriptions in modern dictionaries for English learners — that is, in A. To print the chart, use the printable PDF version. Does this chart list all the sounds that you can hear in British and American English? No. For example, this page does not list the regular t (heard in this pronunciation of letter) and the flap t (heard in this one) with separate symbols. So this page actually lists phonemes (groups of sounds), not individual sounds. Take the phoneme p in the above chart. Typing the phonetic symbols You won’t find phonetic symbols on your computer’s keyboard. You can use my free IPA phonetic keyboard at ipa.typeit.org. You can also use the ASCII Phonetic Alphabet, which represents IPA symbols with “normal” characters that you can type on your keyboard.

Paul Meier Dialect Services - diphthongs - triphthongs - American English - British English - British dialects - IPA Paul Meier Dialect Services - IPA charts - dialects - dialect books - phonetics - IPA - phonetics - vowels (If unavailable here, please go to Professor Armstrong’s site, where you will find them duplicated.) The following interactive charts of the International Phonetic Alphabet (IPA) were designed by Eric Armstrong of York University, Toronto, Canada; and voiced by Paul Meier, of the University of Kansas, in Lawrence, Kansas, USA. They are provided as an aid to students of dialects and phonetics. If you are studying dialects with Paul Meier Dialect Services books or booklets, and want to hear one of the “signature sounds” in isolation, or in comparison with other sounds, you may do so using the charts here. Vowels, consonants, ingressives, suprasegmentals, intonation, diacritics, ejectives, implosives, diphthongs, and clicks are demonstrated. Clicking one of the charts will link you to a Flash animation.

English language, alphabet and pronunciation English is a West Germanic language related to Scots, Dutch, Frisian and German. with a significant amount of vocabulary from Old Norse, Norman French, Latin and Greek, and loanwords from many other languages. Approximately 341 million people speak English as a native language and a further 267 million speak it as a second language in over 104 countries including the UK, Ireland, USA, Canada, Australia, New Zealand, South Africa, American Samoa, Anguilla, Antigua and Barbuda, Aruba, Bahamas, Barbados, Belize, Bermuda, Botswana, British Indian Ocean Territory, British Virgin Islands, Brunei, Cameroon, Canada, Cayman Islands, and the Cook Islands. A brief history of English Old English English evolved from the Germanic languages brought to Britain by the Angles, Saxons, Jutes and other Germanic tribes from about the 5th Century AD. These languages are known collectively as Anglo-Saxon or Old English, and began to appear in writing during the 5th century AD. More details of Old English Key Links

International Phonetic Alphabet (IPA) Origin The IPA was first published in 1888 by the Association Phonétique Internationale (International Phonetic Association), a group of French language teachers founded by Paul Passy. The aim of the organisation was to devise a system for transcribing the sounds of speech which was independent of any particular language and applicable to all languages. A phonetic script for English created in 1847 by Isaac Pitman and Henry Ellis was used as a model for the IPA. Uses The IPA is used in dictionaries to indicate the pronunciation of words. Where symbols appear in pairs, the one on the right represents a voiced consonant, while the one on the left is unvoiced. Download an Excel spreadsheet containing the IPA How the sounds of English are represented by the IPA Recommended books about phonetics and phonology Links UCLA Phonetics Lab Data IPA, International Phonetic Association Free IPA fonts

5 Lessons From The Best Interaction Designs Of 2011 | Co.Design Like many of you, I was delighted to find an Amazon Kindle Fire sitting on my desk a few weeks ago, when it was first released. My delight was heightened by the fact that I hadn’t actually bought it. The Fire belonged to another Robert in frog’s New York studio, Robert Curtis, who was more than happy to unbox the product with me so that we could both get a sense of the quality of that crucial "first" user experience with the product. Lest there be any doubt as to whose Fire it was, the screen immediately displayed a personal message: "Hello Robert Curtis. Welcome to Kindle Fire" (even though it was not yet connected to our Wi-Fi network). Now, I realize that the Fire has been taking a lot of heat since its launch for some major gaffes in the design, with usability guru Jakob Nielsen condemning it as a "disappointingly poor user experience." [Behind the scenes at the judging. Matt Jones, of BERG. 1. The overall work was pretty stunning. 2. 3. 4. 5.